Should Polygamy Be Legalized?

In today’s developing world, it is common for people to desire more than one spouse. It is difficult to commit to just one person; therefore the divorce rate is increasing every day. Polygamy is when a person marries more than one spouse. Polygyny applies to a man having multiple wives and polyandry is when a woman has more than one husband at a time. In most cases it is the men who have multiple spouses rather than women. The question remains whether this should be legalized or not.

Don't use plagiarized sources. Get your custom essay on
“ Should Polygamy Be Legalized? ”
Get custom paper
NEW! smart matching with writer

Having more than one spouse should be illegal because marriage means committing to one person alone, it would affect the family financially and it would be considered morally wrong to the whole society.

Marriage means the union of only one man and one woman; therefore the true purpose and meaning of marriage is ignored when a person marries multiple spouses. Marriage is considered sacred to the mass population; therefore it is important that it is treated with respect and honor. Some religions allow men to have more than one wife. For example, in Islam a man can marry up to four wives as long as the first wife is aware of it and grants him permission to do so.

The wives should be treated equally at all times. This usually creates conflict as it is impracticable for the man to care and treat all of his wives equally.

Having more than one spouse should be illegal because it would affect the whole family financially. Financial decisions between the multiple spouses would cause conflict in the family household. After taking on multiple wives, the husband may not be capable of supporting all the spouses financially, and in most cases one of the spouses may be treated inferior to the other; therefore they may feel neglected and betrayed. This is mainly because of the amount they contribute towards the family financially. If one wife earns more than the other, her decisions are considered as more important as she is the breadwinner of the household. In some cases one of the wives may be forced to stay in the marriage as they may be financially dependent on the husband. In such matters they may also be pressurized by their parents to stay in the marriage. This is because they are against the idea of divorce as it would hurt their reputation. Such cases are usually common in some parts of India, most Muslim countries and other developing countries.

Having more than one spouse should be illegal because it would be considered morally wrong to the whole society. For over generations most societies around the world have considered marriage to take place between two individuals of opposite sexes. Today however as the world is developing, peoples state of mind seem to be changing. By marrying more than one spouse they tend to ignore the traditional cultures, norms, beliefs and values of the society. Having multiple spouses usually results in the husband divorcing one of the wives. If there are children involved, this would lead to single parenthood, which would affect the children as they would be neglected by other members of the society. This would result in antisocial young beings. In the future this would cause the children to become deviant and commit crimes.

In conclusion, having more than one spouse should not be legalized as it would cause an unhealthy family and a disruptive society. The divorce rate is increasing every day due to polygamy. Lone- parent family has become a common trend today. A family is no longer considered to be universal. This is having a negative impact on the lives of the children involved as they do not have a stable means of living. It is losing its meaning and importance. In postmodern societies polygamy is seen to be completely normal and this is affecting the new generation as they may substantially abandon the idea of single marriage.

Should Polygamy Be Legalized?. (2017, Jan 04). Retrieved from https://studymoose.com/should-polygamy-be-legalized-essay 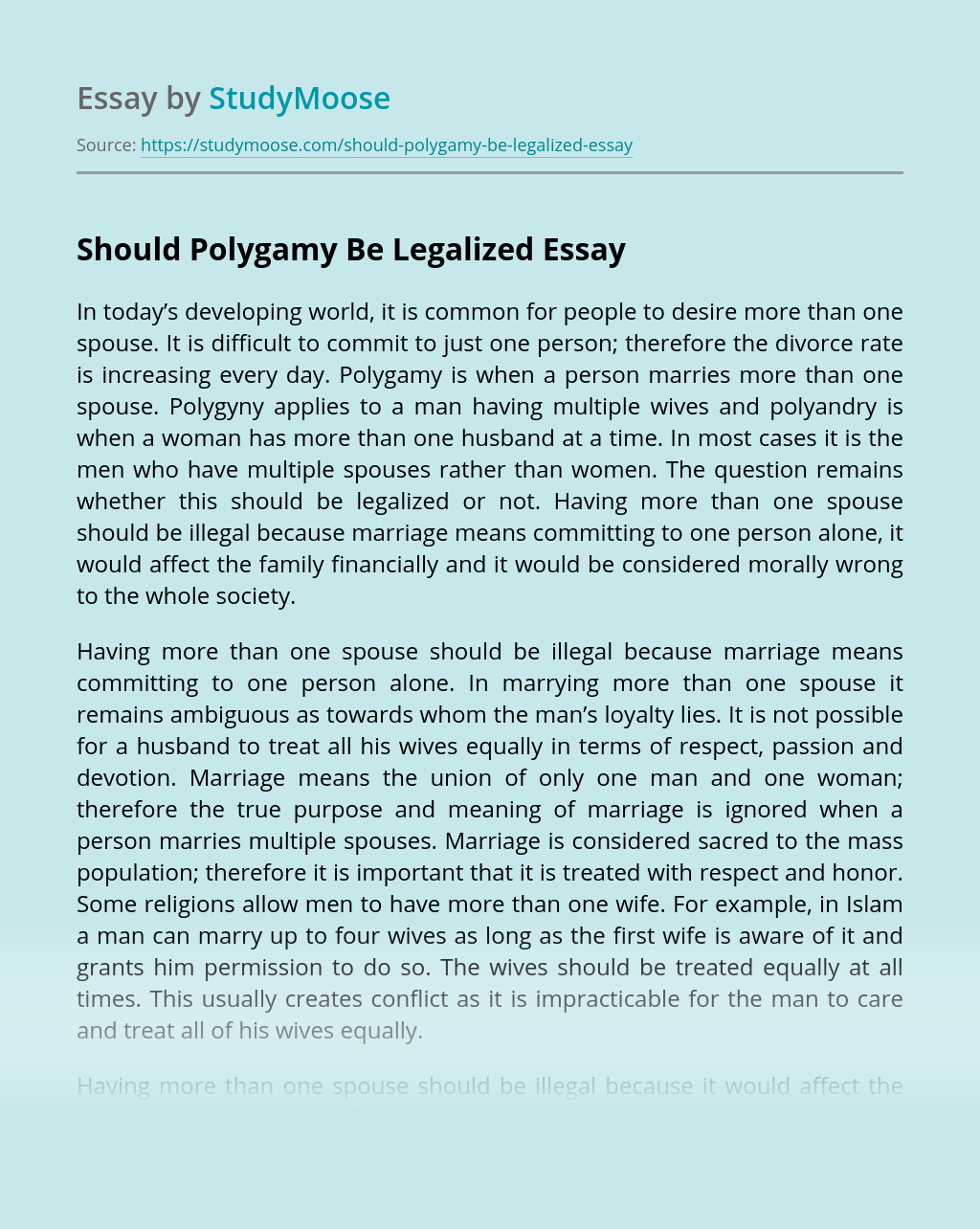