Ethical and Legal Issues in Nursing

Nurses today face many ethical dilemmas in the delivery of patient care. What can or should be done for the patient versus the wishes of the patient’s physician conflicting with the personal beliefs the nurse holds to be true. The client’s wishes may conflict with the institutional policies, physician professional opinion, the client’s family desires, or even the laws of the state. According to the nursing code of ethics, the nurse’s first allegiance is to the client (Blais & Hayes, 2011, pg.

Don't use plagiarized sources. Get your custom essay on
“ Ethical and Legal Issues in Nursing ”
Get custom paper
NEW! smart matching with writer

60). The ethical ideals of each nurse must be weighed with the laws of the state along with providing the most ethical care for the patient. The advancements in medical technology make it possible to sustain a patient life where previously there was no hope of recovery. These advancements have put nurses in the forefront of decision making begging the question “just because we can, should we” to be answered. Nurses need to understand the legalities involved with these new technologies to practice safely and effectively.

The American Nurses Association Code of Nursing Ethics could influence a final decision in each case study that was presented. The six caps study revealed family members to have conflict in their desires when it came time for a decision in going ahead with surgery (the father’s desire) and having a poor quality of life as the outcome (the adult children’s belief based on physicians prognosis).

The adult children believe that their mother would not want to have the surgery and have a poor quality of life. The appropriate decision to involve the ethics committee shows the collaboration between health care professionals. Nurses should be aware of their own values and attitudes in order to recognize when a situation might affect the care they are able to provide (Blais & Hayes, 2011, p.52). The nurses primary commitment is to the patient, whether an individual, family, group, or community. The nurse promotes, advocates for, and strives to protect the health, safety, and rights of the patient (ANA Code of Ethics for Nurses, 2014). Given the information that the adult children believe, their mother would not want to undergo the surgery, it is implied that it was the patient’s wish.

Based on the above information the ANA code of ethics can influence the final decision in that the family members would come to realize that the outcome from surgery would not be what the patient desires. A good decision is one that is in the client’s best interest and at the same time preserves the integrity of all involved (Blais & Hayes, 2011, p. 61). The critical thinking exercise gives information that a nurse is a witness in a malpractice case. The negligence resulted in harm to the client and the case is against the healthcare institution and another nurse who was overtly negligent. The nurses primary commitment is to the patient, whether an individual, family, group, or community. The nurse promotes, advocates for, and strives to protect the health, safety, and rights of the patient. The nurse is responsible and accountable for individual nursing practice and determines the appropriate delegation of tasks consistent with the values of the profession through individual and collective action (Blais & Hayes, 2011, p. 59). Given the above ethical codes the nurse failed to uphold and follow ethical practice which resulted in harm to the patient. It is reasonable to assume that the ANA code of nursing ethics would have a significant impact on the courts final decision, as codes of ethics are usually higher than legal standards, and they can never be less than the legal standards of the profession (Blais & Hayes, 2011, p. 58)

An example of this might be a group of students that decide as a whole to cheat on an exam. In other words, if the social norm is used as moral compass, there must be an unbiased check and balance system in place. In a hospital setting, this process may involve an ethics committee, an organization’s corporate compliance, or a human resources department. For RN’s that are faced with ethical and moral dilemmas, it is also important to refer to the Code of Ethics for Nurses that has been established by American Nurses Association (ANA). The ANA has set very clear guidelines for RN’s concerning the professional ethical obligations that are expected of nurses when faced with moral decisions concerning patients, colleagues, and the organizations that they work in (American Nurses Association, 2014).

The nurse has a legal duty to assist justice as far as possible (Blais & Hayes, 2011). In the case study of the nurse who observed a nurse violating standards of care, and who was overtly negligent, the nurse has a legal duty to report the incident. The primary responsibility of a nurse is to the patient. It is vital for the nurse to report negligence on any level in order to protect the safety of patients. The nurse also has a legal responsibility to be truthful and honest when testifying as a witness in court (Blais & Hayes, 2011).

In the case study of Marianne, the responsibility of the nurse is to organize discussion between the patient and her family regarding end of life decisions. In this case, there is no advanced directive, which puts the family in a bind, not knowing exactly what to do. According to the American Nursing Association, the nurse should attempt to have the Advanced Directive signed during the admission process (“End of Life Issues”, 2014). Doing this will not only protect the patient, but will assist the family in
knowing what the patient wishes in the event that the patient cannot speak for herself. A nurse has a legal responsibility to put the patient’s needs first, protect the safety of every patient, and act as patient advocate with every patient encounter.

As stated above nurses are faced with many personal and professional dilemmas in their daily duties. The ANA Code of Ethics is intended as an aid to these difficult decisions. The danger, though, with any such “aid” is that it may be applied in an unthinking manner as simply a set of preexisting rules (Dahnke, 2014). Nurses must always keep the focus on delivering the highest quality of care to the patient.

Ethical and Legal Issues in Nursing. (2016, Mar 13). Retrieved from https://studymoose.com/ethical-and-legal-issues-in-nursing-essay 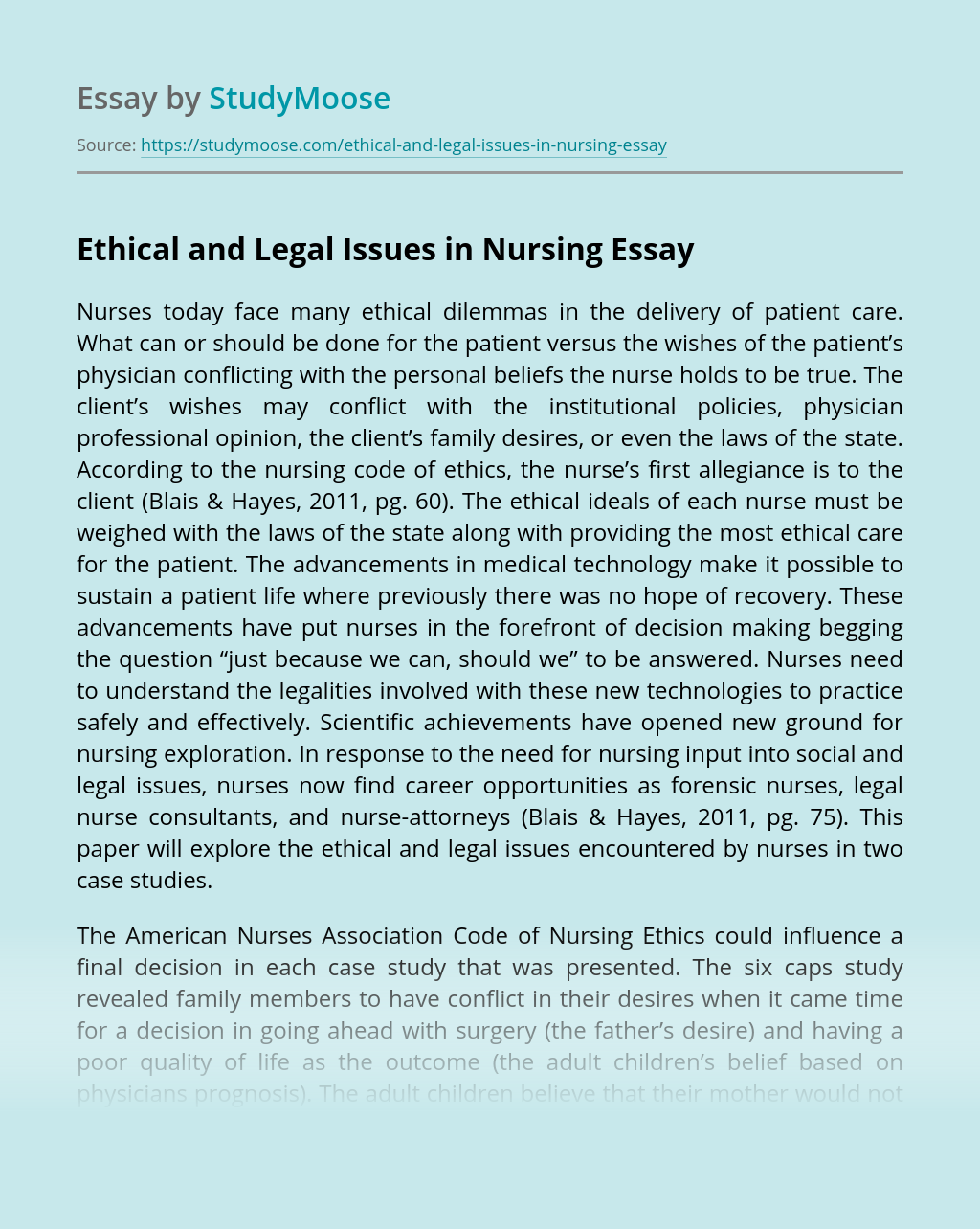