Heightened security concerns arising from the growth of various forms of crime, including illegal immigration and terrorism, have led to increased interest in the development and application of “technologies of surveillance” (Lyon, 2001). These are technologies that following that following surveillance given by Lyon, a definition which is adopted for the purposes of this research facilitate the collection and processing of personal data, whether identifiable or not, for purposes of influencing or managing those whose data have been collected (Lyon 2001:2).

Technologies often have an inherent logic or bias which may strongly influence the way in which they are being used.

Don't use plagiarized sources. Get your custom essay on
“ Biometrics Technology ”
Get custom paper
NEW! smart matching with writer

Nonetheless, it is mainly in relation to their surveillance and control potential that biometric applications in developing countries are attracting controversy. They are seen as part of an array of surveillance technology that have advanced to the point where they are now collectively posses the capability to threaten the most basic democratic notion of individual autonomy and privacy (Nuger and Wayman 2004)

The surveillance of cross boarder traffic, especially through the use of biometrics technology, has become more popular in the wake of terror attacks and ensuing war on terrorism.

As part of efforts to enhance security, governments around the world are investing large sums of money and human resources in biometric technology, which also act to accelerate the use of biometrics among private sector entities. Technologies that previously had difficulty in surviving even their pilot stages were suddenly good enough to be installed across vulnerable points of entry into a variety of countries, not only in United States of America and Europe but also in many other African and Asian countries.

Although biometrics data have long been used in the realm of criminal proceedings such as fingerprints and DNA profiling, such data are increasingly being used by governments and private entities as a way of ascertaining individual identity in other context. Reference measures have expanded from the traditional types mentioned above to involve multiple human characteristics, such as the use of the facial image, iris, retina hand prints, and so on. The use of biometrics is not restricted to travel and identity documents but extends also into commercial and other private sector domains, such as e-passports holding both the user’s personal information and facial image; finger prints taken as a legal requirement for getting a visa, but not stored anywhere on the visa; paying a chain stores bill by scanning the purchase fingers and checking in at the airport using a passenger iris. These systems seem different in their purpose and procedure, but each use biometrics technology in some way.

The nature and diversity of subjects that can be explored in an analysis of biometrics and its legal implications makes it particularly interesting field of research. Although much debate about the technology appeared before the dramatic changes brought about due to the 9/11, the relevance of such debates appears only to have increased. Contributions to the ongoing debate are drawn from the perspectives of politics, law, philosophy and ethics.

As he above overview of the research suggest the introduction, the introduction of biometric technology has been accompanied by enticing security arguments. It has been claimed that the measures are taken to ensure, inter alia, the legitimate rights of individuals and to combat terrorism and crimes. However, the use of biometrics also gives rise to much concern that such measures may also pose a serious threat to the protection of individuals and their rights especially in developing countries, in particular those rights related to privacy.

The research will not aim to take sides in the earlier disputes, because am convinced that from a practical point of view, such a general discussion on biometrics and privacy rights may be too narrow and abstract to be very fruitful. We need to ensure that the use that the use of biometrics in developing countries does not pose a danger of undermining or even destroying individual rights on the ground of defending it. Seen from this perspective, the central aim of this research is to answer the following question:

What are the privacy issues raised by the use of biometrics technology and what might be the appropriate legal solutions?

This research will attempt to answer this question by analysis characteristics of biometrics information and examining legal safe guards which exit on national levels in East Africa and international levels such as in the EU, with the aim of recommending appropriate safe guards in order to provide adequate human rights and personal data protection. However, the objective of the research is not to devise a comprehensive framework for reform but to facilitate the drafting of such an agenda by exploring possibilities and providing recommendations.

To achieve the central objectives of the research, four sets of sub-questions will be investigated; 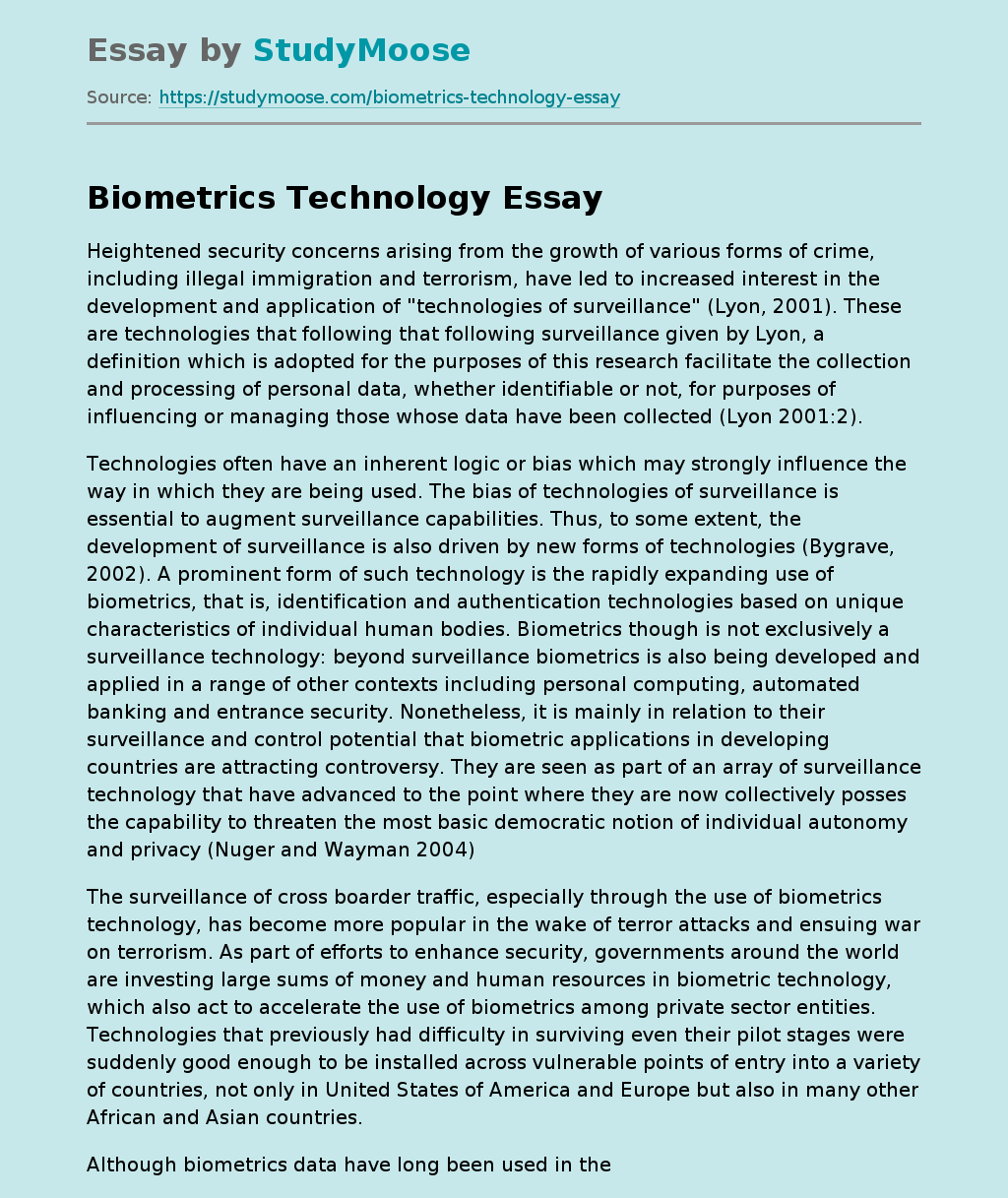