Race and ethnicity have had different categorizations in the US over the years. From the first census in 1790 to the latest one of 2010, several changes have occurred. The categorization names of different races, ethnicities and genders have been changing to reflect the changes in the current public attitudes, science and politics. For instance, those referred to as colored were renamed black, and African American and Negro added later (Census Race Categories, 2015). Changes in the categorizations are expected to be seen in the coming years as the world continues to evolve.

Don't use plagiarized sources. Get your custom essay on
“ wk 5 essay you decide ”
Get custom paper
NEW! smart matching with writer

For example, in the 2020 census, Negro will be dropped. During the 1950s, people conducting census used to determine the race of the people they counted. There was an improvement in the 1960s where Americans had liberty to choose their own race. More advancement was experienced in the 21st century as Americans could categorize themselves in more than one racial category.

Prior to that, multiracial people were counted only in one racial category.What the Census Might Have Called MeThe first American census in 1790 could have categorized me as either a slave or all other free persons. If I was owned by a white person to work for them with little or no pay, then I would be called a slave. On the other hand, I would have been categorized as all other free persons if I was a freed slave. The latter category was made up of black and other people who were not native American like those from Europe. Freed slaves also belonged to this category.

On the other hand, the most recent census of 2010 could have categorized me as black, African American or Negro (Census Race Categories, 2015). These terms denote those people who have roots in Africa and whose complexion is dark. They are the people initially referred to as slaves but as changes take place and equality is achieved, their names also change.Social ConstructsThe two categorizations of 1710 and 2010 differ significantly. However, they also have some similarities. One difference between the two census is that in 1790, the census did not recognize the ethnicity of the populations living in the US. The census failed to capture this important categorization. For the 2010 census, ethnicity was embraced and several ethnicities were included in the categorization (Census Race Categories, 2015). Ethnic groups living the in the United States include American Indians, Asians, Pacific islanders, Latin, Spanish and Hispanics.Second, in the 1790 census, people who have roots in Africa were categorized as Slaves or all other free persons. The former categorization was for those people who were working for the whites forcefully with little or no pay. The latter categorization was for the blacks who were freed slaves together with other ethnic communities. Lastly, 1790 census categorized the white people according to their gender under categories Free white males and free white females (Lee, 2006). The 2010 census only categorized races without including gender. In comparison, both 1790 and 2010 census had different categorization for different races. Native Americans and those with roots from outside America are categorized differently. The concepts of race ethnicity and gender have changed over the years, each census has a little change in the approach to these concepts. They are either changed, added or removed. Between 1850 and 1900, the category of other race was removed but was then returned as an option in 1910. The Asian ethnicity was first recognized in 1860 when Chinese appeared as a category. In 1900s, Asians were much more recognized as sub-categories within Asian became more detailed ((Nagel, 2003). For instance, beginning in 1920 to 1940, Hindu was included in the umbrella as a different race. Despite Latinos being among the first immigrants to the United States, they were only recognized in the late 20th century during the 1970 census. There was a question asking about the origin or descent. White is the only category that has remained constant since the beginning. Ironically, people identified as white have not been constant. Americans identify their ethnicity and race differently with each consequent census.Social constructs refer to what is defined by people and society to be true. They differ from one society to the other and also depend on the time period in which they exist. Social constructs are usually as a result of human choices rather than laws of nature (Liebler, 2017). The concepts of gender, ethnicity and race are socially constructed notions that result from social facts and social conventions. Race is a social construct as it is not biological. There are no genes that are common to all whites of all blacks. If race was biological, classification of individuals according to race would be constant throughout the world. However, a person categorized as white in Argentina might be categorized as white in the US or colored in south Africa.Gender is another socially constructed entity. It describes the way of perceiving, describing and talking about women and men. the society sets out feminine and masculine identities through socialization process as well as gender roles of children based on their genitalia and physical appearance. Gender is different form sex which is biological.Similarly, ethnicity is also a socially constructed entity. What one chooses to believe to be right or wrong is not biological and may differ from one society to another. While eating pork may be wrong for Muslims, to Christians it is a right thing to do (Liebler, 2017). The way of life, foods and drinks believed to be right by one society may not be acceptable for another society in a different location. Better Future Census CategoriesThe society is changing and so should the processes of the country and census. The culture of the people is also changing and there is adoption of new practices. Changes in ethnicity, race and gender are necessary in the coming census. One significant categorization to be included under gender is Transgender for those people who have male and female genitalia. This will be necessary as these people are neither male nor females. Besides, ethnicity can be removed as a categorization and remain with racial categorization only. Those whose complexion is light to be referred as whites and those with a dark complexion to be called blacks’.ReferencesCensus Race Categories: A Historical Timeline. (2015, June 10). Retrieved from S. J. (2006). Additional complexities: Social class, ethnicity, generation, and gender in Asian American student experiences. Race Ethnicity and Education, 9(1), 17-28.Liebler, C. A., Porter, S. R., Fernandez, L. E., Noon, J. M., & Ennis, S. R. (2017). America’s churning races: Race and ethnicity response changes between Census 2000 and the 2010 Census. Demography, 54(1), 259-284.Nagel, J. (2003). Race, ethnicity, and sexuality: Intimate intersections, forbidden frontiers (p. xii308). New York: Oxford University Press. 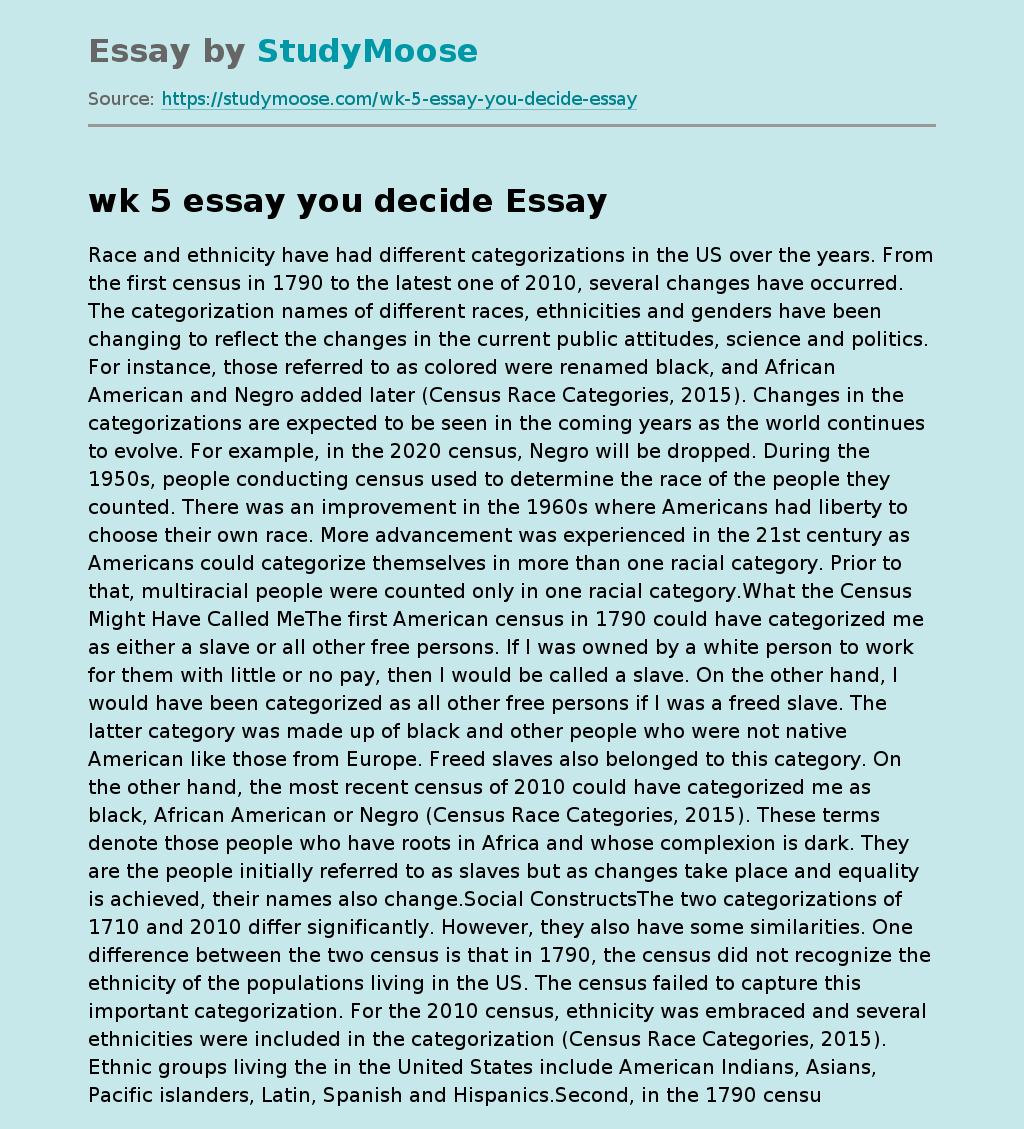