With reference to the ways Steinbeck presents Curley, show how far you agree that he is a danger to others

In Of Mice and Men Steinbeck presents many characters that are extremely insecure about themselves and their future. Curley is arguably one of the most insecure of them all, despite his position as the boss’s son. His insecurities mostly stem from his small stature, and he goes to great lengths to compensate for this – including violence. He is a boxer, after all. For this reason we can be certain that Curley is a danger to others. In examining this claim, a good place to start is Steinbeck’s use of setting.

Get a verified writer to help you with With reference to the ways Steinbeck presents Curley, show how far you agree that he is a danger to others

Most of Curley’s appearances are in the bunk house, which is described as, “whitewashed,” and, “unpainted.” The dismal setting portrays how bleak the lives of the itinerant workers are, and the fact that Curley goes here to pick a fight just proves his inferiority complex. He has to pick on the weak in society to make himself feel better. Another thing to note in Steinbeck’s presentation of the bunkhouse is that there were, “small, square windows.

” This use of alliteration emphasises that the bunkhouse must have been quite dim, representing an absence of hope. It also tells us that Curley prefers to hide in the shadows, striking when it is least expected. In this way the setting conveys that he is a danger to others.

Furthermore, his actions are a key way to examine his character. The way Steinbeck presents his actions paints him as nothing more than an impulsive, short tempered scoundrel. We are told that, “Curley’s rage exploded,” when he saw Lennie laughing.

The violent verb, “exploded,” portrays that he can rapidly swing from relative calmness to outright violence in a matter of seconds, with very little provocation. This proves he is a danger to others. Lennie, “tried to retreat,” but Curley disregarded this and continued, “slugging him in the face.” This conveys how pathetic Curley really is – the fight is completely one sided. In fact, it would be more appropriate to describe it as an assault than a fight. It is only logical to conclude that a man capable of such a crime is a danger to others.

His actions elsewhere in the novel back up the assertion that he is a danger to others. When he is first introduced to George and Lennie we are told that, “His gaze was at once calculating and pugnacious.” Right from the beginning of the novella Steinbeck presents him as someone who is untrusting of others, always on the offensive. His actions after discovering the death of his wife also prove how heartless he is, especially when compared to Slim’s tender handling of the incident. We read that, “Curley carried a shot gun in his good hand. Curley was cold now.” Curley’s first reaction is to receive revenge for the killing. He shows no signs of grief. He is simply, “cold.” This demonstrates that he is a danger to others, because his compulsive actions always revolve around violence.

Moving on, dialogue is very important when examining Curley’s personality. Steinbeck arguably places more emphasis on dialogue than anything else over the course of his novella. The characters speak with a combination of slang and phonetic spelling, somewhat of a linguistic shibboleth that proves they are of the poorer working class. Even Curley, with his slight economic advantage, still comes off as sounding rough and slightly intimidating.

Curley tries to taunt Lennie into taking the first hit, by using coarse language such as, “son-of-a-bitch,” and, “ya big bastard.” The latter insult is a product of his insecurity about his height. After all, we are told elsewhere in the novel that, “Curley’s like a lot of little guys. He hates big guys.” Curley not only poses a danger physically, but emotionally as well. He enjoys insulting and belittling others. This is, of course, a common trait of a bully – they try to cover up their own failings by taking it out on others. This incident with Lennie proves to be extremely demeaning for him. Even in the latter chapters one of the reasons he tries to have Lennie lynched, according to Slim, is that, “Curley’s still mad about his hand.” He is presented as being obsessed with revenge, without doubt posing a danger to anyone that would try and stop him.

Elsewhere in the novel Steinbeck uses Curley’s wife to present how universally disliked he is. We are told that he has a, “glove fulla Vaseline,” so he can, “keep that hand soft for his wife.” This portrays him as a self-centred pervert that views his wife as nothing but a possession. His wife laments that, “I don’t like Curley. He ain’t a nice fella.” His wife of a few days already has developed distain for him. If the person he is supposed to be closest to says this, his self-gratifying personality must be a danger to others.

However, this could be too harsh an analysis. It could be argued that Curley is just as lonely as the rest of the ranch men and that the only way he can gain a semblance of respect from the other men is to prove that he is powerful. During the incident with his hand his tough exterior melts, revealing his true personality. We are told that, “he stood crying.” This is a vast dissimilarity to his previous behaviour. Through this presentation Steinbeck proves that he is nowhere near as tough as he makes himself out to be.

We also get hints that he is afraid of the other men, especially Slim and Carlson. Carlson tells his, “you’re as yella as a frog’s belly,” and even old Candy joins in to taunt him. Curley never dares to fight them. Perhaps Steinbeck intended us to pity Curley, a man that in different circumstances may not have posed any danger to others. It could be argued that Curley is simply a product of the harsh time in which he lived, where he had no choice but to fight in order to survive. Maybe all he craves is acceptance.

To conclude, Steinbeck presents Curley as a man that is dangerous to only certain types of men. He is undoubtedly dangerous for the mice of the ranch, such as Lennie. However, he poses no danger to those that are confident enough to rebuke him. His aggressiveness is little more than a façade. He embodies how harsh live was in 1930s America.

With reference to the ways Steinbeck presents Curley, show how far you agree that he is a danger to others. (2017, Nov 06). Retrieved from https://studymoose.com/with-reference-to-the-ways-steinbeck-presents-curley-show-how-far-you-agree-that-he-is-a-danger-to-others-essay

Get a verified writer to help you with With reference to the ways Steinbeck presents Curley, show how far you agree that he is a danger to others 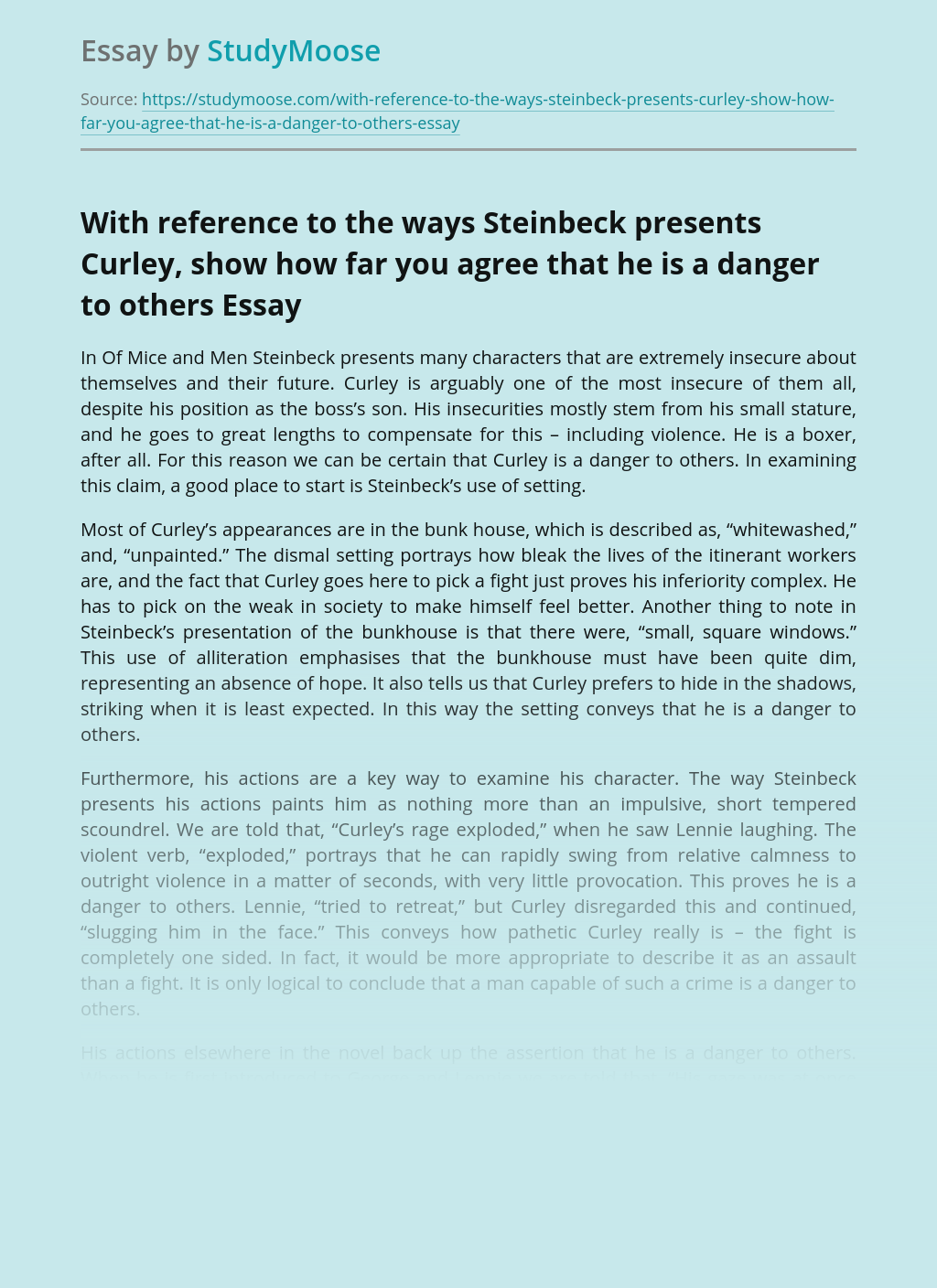 Of Mice and Men

The novel “Of Mice and Men” was written by John Steinbeck in 1937. He wrote the novel to illustrate the pain and misery of the migrant workers during the Great Depression in America. The novel also illustrated the difficulty for ordinary people to reach the American Dream. Steinbeck represents the relationship between George and Lennie,...

Present a Speech Prompt: Based on these texts and your own experience, make a generalization about how relationships with others help define who you are. Share your ideas in a speech. Interests (“What, of This Goldfish, Would You Wish?” and Of Mice and Men) Religion (“My So-Called Enemy”) Character Traits Plan Choose three texts from...

Get Essay
Of Mice and Men - Friendship

John Steinbeck shows how important a friendship is and how much two people can support each other to survive. Take this bond away and it will create a difficult and almost impossible journey for the two men in this novel. John Steinbeck portrays Lennie and George as having the greatest friendship in the world and...

Friendship Between George and Lennie

In the novel ‘Of Mice and Men’ Steinbeck stresses the importance and abnormality of the friendship between George and Lennie by using a variety of methods. They are complete opposites, yet they share a journey through the struggles of The Great Depression as friends and have faith in the same dream. This pulls them together...

Loneliness Theme in 'Of Mice and Men'

Solitude is the feeling of seclusion – Steinbeck accomplishes this theme by portraying efficiently through essential fictional characters in ‘Of Mice and Men’. By living in the town of ‘Soledad’ (Spanish for solitude), the audience gets a frustrating sense of the dismal environment that the migrant workers are enduring by their recurring way of life...

What contribution does Slim make to 'Of mice an men'

For my coursework I am going to analyse the character of Slim and say what contribution he makes in ‘Of Mice and Men’. I will describe what he says, what he does, what other people think of him and his relationship with the other ranch hands. We first meet Slim on page fifty five, this...

For which characters in Of Mice And Men do you feel sympathy the most?

Refer carefully to the novel in your response. I felt some compassion for Curley’s other half as she was the loneliest of them all. She had a partner who didn’t love or respect her as he went to brothels. In addition to Curley’s better half I pitied Slim. He has a great deal of responsibility...

What do we learn about Steinbeck's views of human nature from reading 'Of mice and men' ?

What do we find out about Steinbeck’s views of human nature from checking out ‘of mice and men’? Steinbeck, like numerous others thinks that everyone, consisting of those who do not deserve it, needs affection and attention. This reveals us that Steinbeck sees human beings as social beings, in the book he specifies this as...