How you ever thought about the meaning of freedom? Freedom cannot be described in simple words, because this term contains many deep meanings. It does not have a common definition. Different people understand it in different ways. Freedom means more than simply “free” to do whatever I want. Freedom can be viewed in many ways. Freedom for me is the right to express myself in any way I choose. It also means having liberty and independence of your own actions. We all must work for our own freedom.

Don't use plagiarized sources. Get your custom essay on
“ With Four Freedoms, Four Responsibilities ”
Get custom paper
NEW! smart matching with writer

Freedom is being able to do many things without being forced into doing anything. There are many countries where the people living in them hear about our freedom, but they cannot experience it for themselves. I believed that everyone should be able to experience and live in a free nation. They have the right to make a choice in their life and be able to enjoy it. Another example, in my case, is that in my country Honduras we do not have any type of freedom.

If I have something to say the government doesn’t pay attention to my words and I can even get killed. That is, having no freedom because you cannot even express what you want or what do you feel. Every nation has different types of freedoms. Americans have a variety of rights. Thesis Statement: Freedom is often confused as being a universal value shared by all societies and nations. An outstanding definition for freedom is National Freedom, Political Freedom, Individual Freedom, and Spiritual Freedom.

Hegel believed that freedom is the central concept in human history. His point of freedom is the concept of positive freedom. The positive freedom is at the heart of many nationalist, communist, authoritarian, and totalitarian groups in our day (G.H.R. Parkinson). Hegel’s point of view is different from the other philosophers because the subject of freedom interested Hegel. His views on this subject are of general interest. Even though some of his work was confusing and complicated. He also mentioned that is the need of people to feel proud of where they come from. Hegel believed that the best things make progress. Hegel gives us more accurate and manageable views of difficulties where we are in history. Almost all of Hegel’s beliefs of freedom are positive. They might be something that he does not agree with other philosophers. I like the way he thinks because basically he said that freedom is one of the most important things in life. All his beliefs, people are really interested in them because no matter where you come from, you must be proud of that country or nation. Even if there is no freedom. You work for their own freedom and if not, people must move on. Some countries have rights, and some do not. There are four types of freedom that I am going to talk about.

The first type of freedom is National freedom which means nation freedom from foreign rules. Not all countries have this type of freedom. Citizens of the United States fight for their rights so that way the whole country has its own freedom. The purpose of national freedom is to promote good feelings, harmony, and equal opportunity among citizens. This way the citizens remember that the United States is a nation dedicated to the ideal freedom. They even celebrate a holiday called National Freedom Day it is celebrated on February 1st.

The third type is Individual Freedom and is the ability to think and act for ourselves. Individual Freedom can grow and expand but it can also disappear if the people allow it to do so. If people do not practice this type of freedom in can get disappear. We can also expand this freedom by letting other citizens know that they have that right and they can use it. People have individual freedom to take advantage and safe. It can only be preserved if is expressed in the hearts of the people in America. Individual Freedom is the most precious and greatest gift of them all. We Americans we get to express what we think or feel because we have that right. We need to take care of this opportunity because not all countries have this benefit. We all have different opportunities as individuals if we do it with respect and it is legal to our country. The most important thing to show is Respect with that we can accomplish most of our dreams as Americans.

The last type is Spiritual Freedom which are those beliefs and thoughts which exist in the hearts, minds, and souls of everyone. This allows us to prosper both materially and spiritually. You get to experience what you are, what life is beyond what thinking says is here. This basically does what your heart or mind tells you to do.

Freedom has different definitions based on the person’s point of view. It is not an easy term to define especially because every person has a different way to define this term. They have negative and positive definitions. Hegel’s point of view about freedom is positive. For me, freedom is something positive. The negative side is that people take too much advantage of the freedom and take it to a different level. They do not know the significance and go with what negative people say about freedom. In this paper, I found out that not every nation has freedom. Having freedom is a privilege that we must take care and sometimes even fight for our freedom. All over the country exist a lot of types of freedom. I chose to talk about four of them because I think they are important and because they all basically connect to each other. All of them involved us as humans in many ways. We need to participate in one each of them to be part of that freedom. 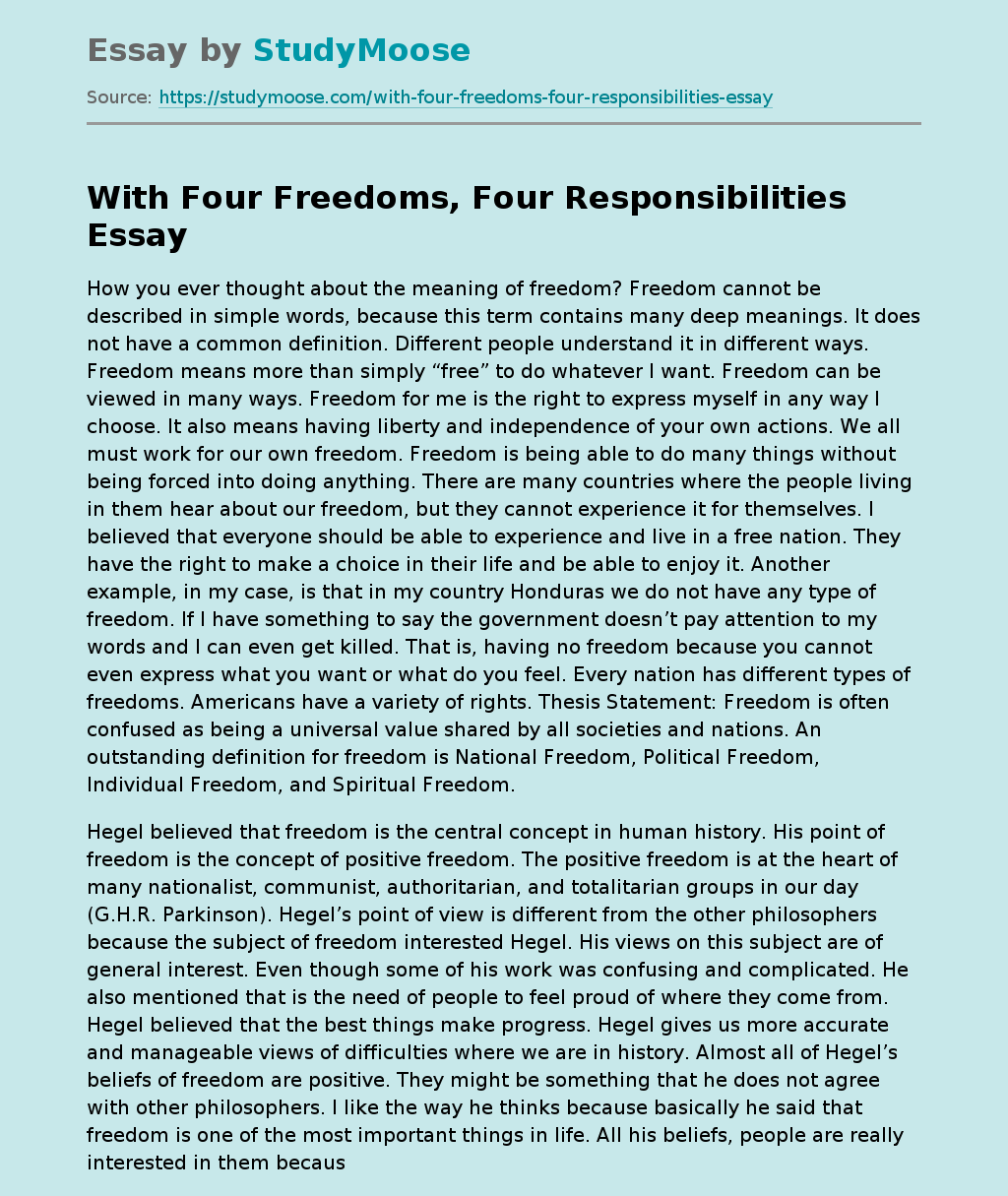