There is no doubt that nature was the prodigious source of inspiration for William Wordsworth. Like many other romantic poets, he possessed great love for nature but unlike them he never expressed his anger for nature’s unkindness to him. Wordsworth started perceiving the nature closely and had a desire to give his feelings some words. Wordsworth enhanced his poetry with his outstanding imagination. William Wordsworth not only used nature, but also his family and his romantic affairs to make him into a respected poet in the eighteenth century.

Don't use plagiarized sources.
Get Your Custom Essay on William Wordsworth Just from $13,9/Page

Wordsworth was born in Cockermouth, Cumbria, England on April 7, 1770. His mother died when he was only eight years old and his father passed away only a few years later leaving William and his other four siblings orphans. This was indeed one of the hardest obstacles William had to endure which later influenced much of his work. After studying Hawkshead, he studied at St. John’s College but just before his last semester he decided to take a tour through Europe where he came into contact with the French Revolution.

During that time he fell in love with Annette Vallon. Although the two never married, they conceived a daughter named Caroline. In 1793, Wordsworth published his first poetry collections, Descriptive Sketches and An Evening Walk. The year 1802 was a landmark in Wordsworth’s career. William and his sister Dorothy Wordsworth traveled to France so that Wordsworth could finally meet his daughter, Caroline. Then he separated from Anne Vallon and married a childhood friend named Mary Hutchinson. The couple conceived five kids together. Later on they grieved the loss of two of their children, Catherine and John, who both died in 1812.

Wordsworth and his sister, Dorothy, met Samuel Coleridge in 1795. They all became extremely close and later worked together to publish the famous Lyrical Ballads. They collaborated on many groundbreaking collection of poetry. Wordsworth warned readers of Lyrical Ballads that they would either love or hate the poetry, and seems to have been true. Although, completely humorless his poems were very exciting to many readers. His poems were mentally composed during long walks outdoors. He sympathized with the poor and oppressed. He romanticized peasant and children, whom he believed were capable of perceiving the divine more purely than those corrupted by city living (Campbell). Wordsworth believed that he was a genius and enjoyed hanging out with people who agreed with him. Despite of his shortcomings, he was fortunate to have people like Dorothy and Coloridge who were willing to sacrifice their own time and careers to advance his. They had faith in him and believed that he’d achieve many great things in his lifetime.

William Wordsworth helped launch the romantic poetry era. He provided his audience with an understanding of style of poetry. Wordsworth claimed that there is certain simplicity to poetry, it shouldn’t contain incomprehensible ideas that can be ascertained by a full analysis of the poem itself. Unlike other poets his ideas lead straight to the point, and there are no provoking ideas that can surmise from his poetry. Wordsworth claims that in order to main direct and simplistic in poetry, that one should use nature to reveal his or her thoughts and ideas. Not only is nature relevant in everyone’s life, but it also fosters a sense of maturity when relatable to human emotions and poetry. Wordsworth chooses his characters from a rural setting.

He argued that one who lives close to nature lives closer to the well-spring of human-nature. Many of Wordsworth’s poems are autobiographical as they display a love and deep appreciation of the natural environment (Academy). Wordsworth makes two valuable points that poetry should be simple and direct, as well as that it should be linked to aspects of nature and beauty. He also refers to the gaudiness of his predecessor’s poetry, in terms of intricate vocabulary and, innate literary themes and techniques. Unlike his predecessors, he rebels against their form of poetry by presenting a different format.

Wordsworth is especially regarded as a poet of nature. In most of the poems of Wordsworth nature is constructed as both a healing entity and a teacher or moral guardian. Nature is considered in his poems as a living personality. He is a true worshiper of nature: nature’s devotee or high priest. The critic Cazamian says, to Wordsworth,”Nature appears is a formative influence superior to any other, the educator of senses or mind alike, the shower in our hearts of the deep laden seeds of our feelings and beliefs”. He dwells with great satisfaction, on the prospects of spending his time in groves and valleys and on the banks of streams that will lull him to rest with their soft murmur.

Wordsworth’s youthful political radicalism, unlike Coleridge’s, never led him to rebel against his religious upbringing. He remarked in 1812 that he was willing to shed his blood for the established Church (of England), and his Ecclesiastical Sketches of 1822 represent a homage to tradition and to that church. This religious conservatism colors The Excursion (1814), a long poem that became extremely popular during the nineteenth century; it features three central characters, the Wanderer; the Solitary, who has experienced the hopes and miseries of the French Revolution.

Like other successful duos, Wordsworth and Coleridge were temperamentally dissimilar. Wordsworth, reserved and thoughtful, wrote verse while plodding to and fro in the garden and, we are told, was subject to stomach trouble when revising. Coleridge was irresponsible and debt-ridden, but everywhere spoken of as a genius, if a volatile one. “I think too much for a Poet,” he said. His addiction to opium began early and was never conquered. In time, it became his only regular habit. In 1807, he accepted an invitation to give a course of lectures on poetry at the Royal Institution and moved to London, taking “some noisy rooms in the Strand” above a newspaper office.

It is always easier to make dissension and war more engaging to a reader than friendship and peace, so it is not surprising that Sisman’s book is most alive at the beginning and at the end, when the two eminences are first young and fierce, then quarreling over literary and personal matters. The Wordsworth never could approve of Coleridge’s neglect of his wife to pursue Sara Hutchinson (whose sister Mary became Mrs. William Wordsworth), even though they had little fondness for Sara Coleridge. The story of how she cared for their dying son Berkeley while Coleridge was in Germany, then was reduced to borrowing money, all the time urged by a friend “not to distract her husband from his studies by telling him of Berkeley’s death,” takes the modern breath away.

William Wordsworth was an outstanding English romantic poet. Even after many hardships, he found a way to be extremely brilliant and write some of the best poems of all times. Wordsworth’s most famous work, The Prelude, is considered by many to be the crowning achievement of English romanticism. Devastated by the death of his daughter Dora in 1847, Wordsworth seemingly lost his will to compose poems. William Wordsworth died at Rydal Mount on April 23, 1850, leaving his wife Mary to publish The Prelude three months later. 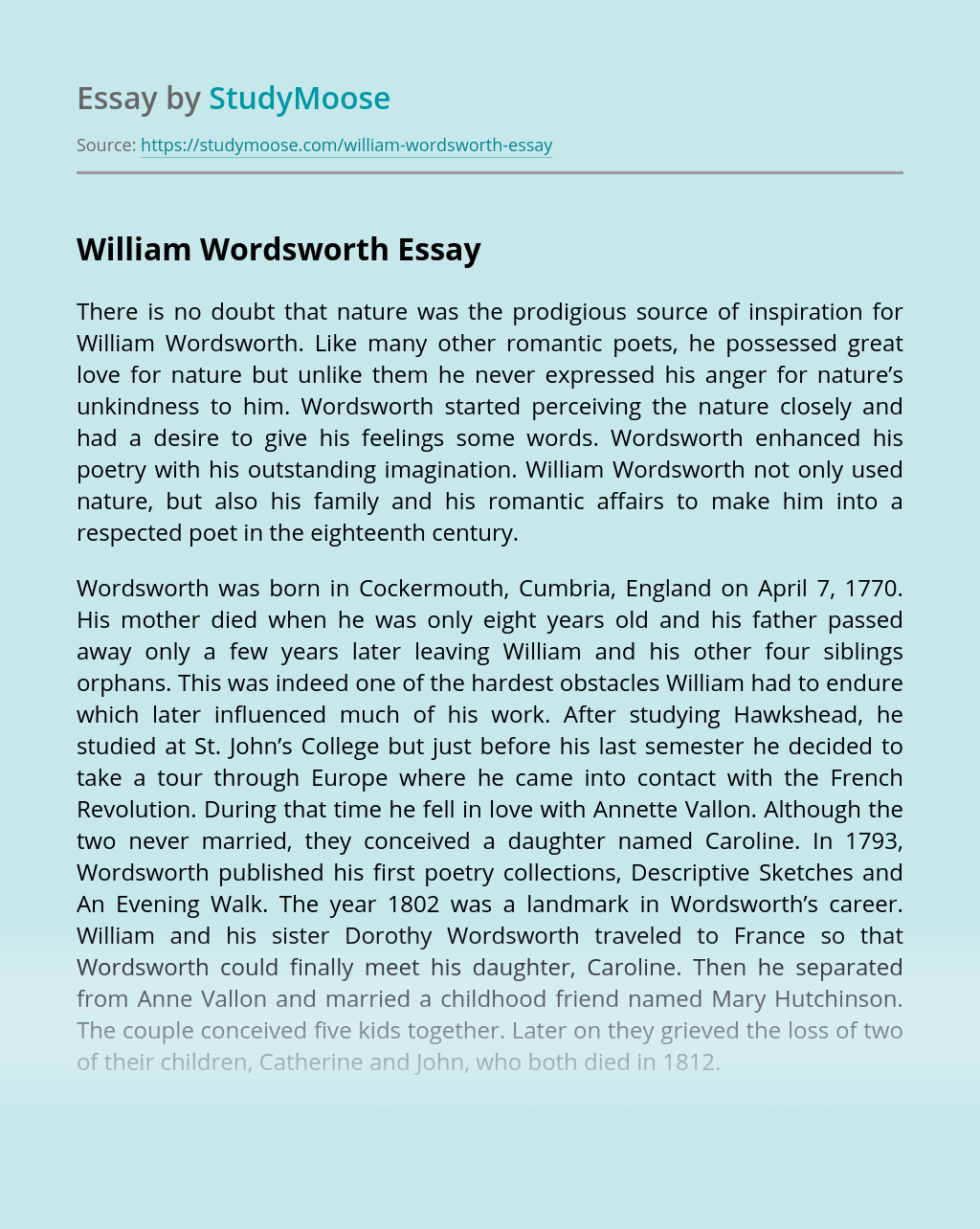 The symbol of the relationship between Amir and Hassan

In the book Kite Runner, the main characters Amir and Hassan have special relationships. Amir is in the superior position, while Hassan is the submissive one to Amir. As Hassan was Amir’s servant, Hassan sacrificed himself in order to forgive Amir’s sins. Amir realized that his sins were not simple mistakes that could be forgiven.... VIEW ESSAY

View sample
The Most Dangerous Game

The exciting suspense of action of Richard Connell’s ” The Most Dangerous Game” brings in a dark, mysterious, and evil setting as it takes us to a young man’s storm of thoughts about the game of hunting and the instinct to survive. Rainsford was his name, and he was a proud hunter full of wit... VIEW ESSAY

Numerous scholars who examine and analyze the comedy of A Midsummer Night’s Dream by William Shakespeare point to Puck as the most significant character in the play. Although Shakespeare masks Puck’s important role in the comedy by hiding him amongst the more powerful characters, it becomes apparent that Puck’s mischievous attitude and knack for creating... VIEW ESSAY

In both “Tune” and “Remember”, Rossetti conveys her own mindsets towards death through blogging about how others ought to treat her death and how she desires to be kept in mind, respectively. She resolves crucial concepts as well as using word choice and the metrical template to paint a clear picture of her perceptions of... VIEW ESSAY

A well-known American writer, laureate of numerous literary awards and recognized master of style Tim O’Brien won his fame for the most part owing to his works devoted to Vietnam war. Three of five his famous books placed Vietnam at center stage (Ringnalda 90). Moreover, his work Going after Cacciato published in 1978 which won... VIEW ESSAY