The Relationship between Man and Nature in William Wordsworth’s poems

Don't use plagiarized sources. Get your custom essay on
“ The Relationship between Man and Nature in William Wordsworth’s poems ”
Get custom paper
NEW! smart matching with writer

Wordsworth finds out as well as establishes in his poems a passionate, impressive, emotional and spiritual and relationship between nature and human life. The love of nature leads Wordsworth to the love of man which is noticeable in many of his poems. Wordsworth feels the existence of a divine spirit around all objects of nature – in the setting sun, the round ocean, the living air, the blue sky etc.

According to Wordsworth, nature plays the role of giving joy to human heart, and the healing influence on sorrow filled hearts. Wordsworth takes pleasure in gathering with nature. Wordsworth style of writing makes his work extremely vivid in both yours and his imagination, for example ‘with all its solemn imagery, its rocks, its woods, and that uncertain heaven received into the bosom of the steady lake’. It gives a clear sense of what Wordsworth was trying to express towards us and to try to make us clearly see what is in his mind.

In the poem ‘Composed upon Westminster Bridge’, Wordsworth’s sister Dorothy said ‘… we left London on Saturday morning at ½ past 5 or 6, the 31st July (I have forgot which) we mounted the Dover Coach at Charing Cross. It was a beautiful morning. The City, St Pauls, with the River & a multitude of little Boats, made a most beautiful sight as we crossed Westminster Bridge.

The houses were not overhung by their cloud of smoke & they were spread out endlessly, yet the sun shone so brightly with such a pure light that there was even something like the purity of one of nature’s own grand Spectacles’, this was inspiration for this poem because on a day Wordsworth would have found himself in a different type of setting. He would have found London crowded with people and there would have been an abundant amount of noise. In the poem he says ‘Open unto the fields, and to the sky; all bright and glittering in the smokeless air’, during Wordsworth’s time it was around the industrial revolution therefore making the early morning sky fill with smoke from all the machinery at work. Wordsworth uses spiritual references to reflect his spiritual experiences for example, ‘Dear God! The very houses seem asleep; and all that mighty heart is lying still!’. Wordsworth has these moments he calls ‘spots of time’ which according to him normally refer to nature. Wordsworth loves this ‘spots of time’ and finds it and important thing in writing his poetry.

The Relationship between Man and Nature in William Wordsworth’s poems. (2016, Mar 13). Retrieved from https://studymoose.com/the-relationship-between-man-and-nature-in-william-wordsworths-poems-essay 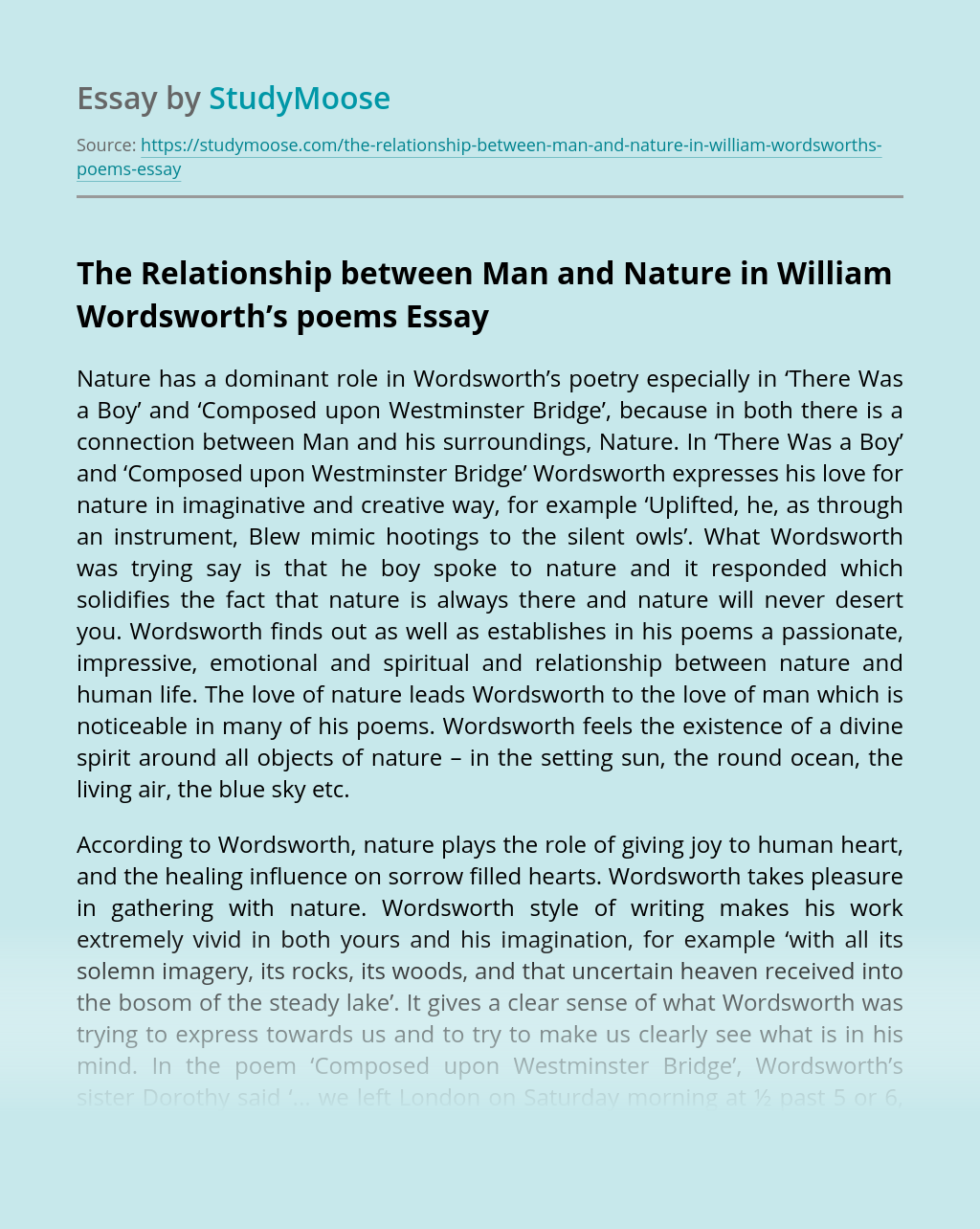