We all have the desire to control our destiny but the degree to which we are able to manifest that desire concretely is, ironically, not under our control. Thomas Lux’s poem, Wife hits moose describes the story of a wondering moose colliding with a wife driving through a forest road during dusk. The author’s third person recall of the incident creates a detached, ironic tone and outlines to the audience that the author has little at stake or control over the situation.

Don't use plagiarized sources.
Get Your Custom Essay on Wife Hits Moose Just from $13,9/Page

Lux effectively uses the last stanza in his poem to prompt the reader to consider the chance of such an encounter and as to whether it was contributed to by a supreme intelligence or just random chance.

The poem is written in four stanzas with a register of seven lines a stanza. Each stanza describes a different stage of the collision. From an introductory, tranquil scene of both moose and wife, then a detailed description of the collision and the aftermath, ending with the speaker pondering on the chance of such an event and if a supreme intelligence was involved.

The speaker’s use of “sometime” in the opening stanza allows him to detach himself from the collision and also highlights that he has no stake over the outcome of the crash. The speaker sketches a tranquil atmospheric scene through terms such as “moose”, “highway” and “forest”. The terms also highlight that the event could of happened in any location that has a “moose”, “Highway” or “forest”; this is purposely done to make the audience think about the chances of such an event happening, which brings forward the theme of supreme intelligence or a controller of fate. Lux characterizes the moose as an unassuming animal, however he personifies it as thinking for itself in the quote “decides the day, for him is done.” This develops the idea of supreme intelligence; if the moose decides the day is over, then it must have a minor thought process, which means that, it could believe in a supreme intelligence.

In line five the speaker switches focus to the wife driving the car and in doing so creates suspense as the audience is reminded of the crash between wife and moose. Throughout each stanza the poet shifts the focus his focus from wife to moose and in doing so creates a crosscutting film like atmosphere which only heights the anticipation the audience feels and also foreshadows that the two are on an unavoidable collision course into each other’s existence. The ‘blacktop’ and ‘pineforest’ are symbolic of both the wife driving the car and the moose, furthermore, both “blacktop” and “pineforest” are made up of two individual words but together; this could symbolize that both the wife and moose have two separate identities, a spiritual and personal identity. The extract “pineforest and blacktop/blend” foreshadows the potentially catastrophic encounter between the two and leaves the audience anticipating the collision. The theme of nature vs man is also present in this extract, blacktop is manmade and pineforest is natural, and when the two combine catastrophe will follow.

The register of the language in lines 15-19 recalls that of a police report, detached and straightforward. The use of the ellipsis in “wife/ hits moose, hard// at slight angle” causes both the speaker and reader to hold their breath as in anticipation, creating a suspenseful atmosphere, further engaging the reader in the text. The ending two lines of the third stanza are unexpected; it doesn’t follow the enjambment before it, in effect this slows down the reader and brings to light the factor that both parties are safe and “unhurt”. This is somewhat ironic considering the nature of the crash and the fact that the “diamond tipped” antlers of the moose merely scratch the surface of the windshield and didn’t penetrate though the windshield to kill or injure the wife inside. A supreme intelligence must therefore be involved in the matters concerning the crash. 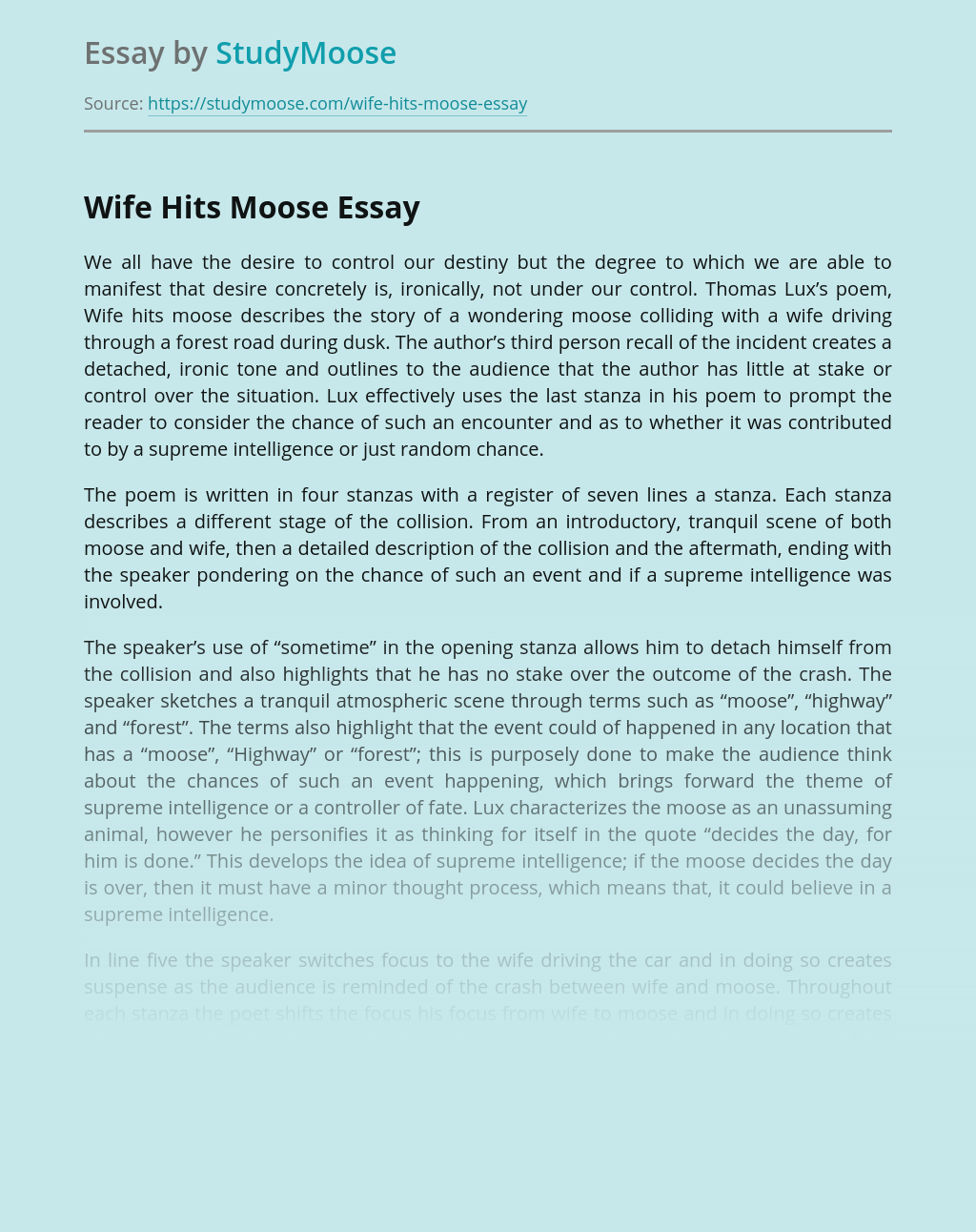 India ranks second worldwide in farm output. Agriculture and allied sectors like forestry, logging and fishing accounted for 18.6% of the GDP in 2005, employed 60% of the total workforce[7] and despite a steady decline of its share in the GDP, is still the largest economic sector and plays a significant role in the overall...

Tattooing as a trend in popular culture

Tattoos and tattooing are taking on an increasingly larger, more visible role in today’s mainstream pop culture. Now you see all kinds of tattooed celebrities, rock stars, movie stars, sports stars and even the elite super models proudly displaying their body art. Tattoos have been a part of people’s lives for many years now. To...

Get Essay
Cultural and sporting events

Cultural and sporting events both possess strengths in the area of promoting community within an environment. The atmosphere created by each is a key factor in the ability of these events to foster community spirit within a region. These activities also contribute to the building of communities in other areas, such as financial economic development....

Variety means the differences in between individuals and groups in society arising from gender, ethnic origins, social, cultural or religious background, household structure, impairments, sexuality and look. Diversity is more frequently viewed as an issue when it really should add to the community by reinforcing relations in between human beings. SHC33. 1 pc [1. 1b]...

Hippies and the Revolution of a Culture

“Tune In, Turn On, and Drop Out” was the motto of the hippie movement, a significant countercultural phenomenon in the 1960s and early 1970s that grew partially out of young America’s growing disillusionment with U.S. involvement in the Vietnam War. Hippies were mainly white teenagers and young adults who shared a hatred and distrust towards...