Why is King Henry VIII so important to the Renaissance?

The Renaissance was a cultural and artistic movement beginning in Italy in the late 14th century. It took about 100 years later to spread to England. For historical convenience, it began in 1485 when the Wars of Roses ended with inauguration of the Tudor Dynasty and lasted till early 17th century. The movement was slow to develop and reached to its height in the Elizabethan era in the second half of the 16th century. In Renaissance, the study of the humanities (Studia humanitatis) flourished and these included ancient Greek and Latin languages (grammar and rhetoric), literature (eg.

Don't use plagiarized sources. Get your custom essay on
“ Why is King Henry VIII so important to the Renaissance? ”
Get custom paper
NEW! smart matching with writer

poetry), moral philosophy, religion, and visual and performing arts such as music and theatre.

The development of large-scale book printing following invention of movable type printing press by Johannes Gutenberg in Mainz, Germany (circa 1439) was important to help spread Italian humanistic culture northward to France, Germany, Holland and England, where it became associated with the Protestant Reformation (or the English Reformation). William Caxton (1422-1491) was the first English printer to bring this technology back to England in around 1470.

The reign of King Henry VIII saw an important change in religion and politics when he made himself the head of the Church of England, bringing the church and state together (1529-39) and cutting all contact with the Catholic Church and the Pope in Rome. There were several developments in literature, visual arts and architecture during his reign and early period of “English Renaissance”.

Literature
The English humanistic literature was mainly of imaginary character. Thomas More’s “Utopia” written in 1516 in Latin, the international language of that time, was one of the examples.

The book consists of two parts and is written in the form of dialogue between Thomas More and a seaman Rafael Hythloday who traveled around the world.

In Book 1, Hythloday criticized European political system at that time: the tendency of kings to start wars and subsequent loss of money on fruitless endeavors (like in reign of King Henry VIII), cruel legislations against poor, the problems of enclosures (the extensive enclosing by landlords of the peasants fields used for sheep farming had denied peasants’ access to their farmland with and subsequent poverty and starvation). More tried to solve these shortcomings in the Book 2 and described an ideal fictional island “Utopia” with its religious, social and political customs.

The political system is democratic, the labor is the main duty, and there is no need of money transaction as there is no private property with goods being stored in warehouses and people requesting what they need. Meals are taken in community dining halls and the job of feeding the population is given to a different household in turn.

Other significant innovations of Utopia include: a welfare state with free hospitals, euthanasia permissible by the state, priests being allowed to marry, divorce permitted, few widowed women allowed to become priests, premarital sex punished by a lifetime of enforced celibacy and adultery being punished by enslavement. While Utopia might be some sort of perfected society, it is ultimately unreachable

Visual Arts
During the English Reformation, there was a large destruction of medieval religious art (iconoclasm). English art was mainly about portraiture and then landscape art for centuries to come. The artists at the time were mainly foreigners till after the end of the Renaissance. Hans Holbein the Younger (c. 1497–1543), a German artist and printmaker is best known as one of the greatest portraitists of the 16th century. He also produced religious art, satire, and Reformation propaganda, and made a significant contribution to the history of book design.

These portable mini-portraits were particularly valuable for different personal purposes at that time. For examples, a nobleman proposing the marriage of his daughter over distances might send a courier with her portrait to visit potential suitors. Soldiers and sailors might carry miniatures of their loved ones while traveling, or a wife might keep one of her husband while he was away.

Music
Henry VIII was a music lover and played various instruments. He composed his own English folk songs, one of his best known was “Pastime with Good Company”, also known as “The King’s Ballad”, written shortly after his coronation and thought written for Catherine of Aragon, his first wife. The secular court music was mainly about courtly love and one of the examples was William Cornysh’s (1465-1515) ‘Yow and I and Amyas’ (Amyas and you and I) in the pre-Reformation England. The Reformation had a great impact on religious music of Britain.

Following the Dissolution of the Monasteries, many English composers worked for the royal and noble families than for the churches, abbeys and religious orders. They also responded to the liturgical changes by introducing English language texts in sacred music rather than Latin. John Taverner (1490–1545) was one the important examples in the Henry VIII’s reign. His principal works include masses, magnificats and motets, of which the most famous is ‘Dum Transisset Sabbatum’ (“When the Sabbath was past.” Mark 16:1) dating from the 1520s.

Thomas Tallis (c. 1505–85) took polyphonic composition to new heights with works like his ‘Spem in alium'(“Hope in any other”) (c.1570), a motet for eight choirs of five voices each (ie. 40 independent voices). As for music printing, it was technically more complex than that of written text. Around 1520, John Rastell developed the single-impression method for printing music, in which the staff lines, words, and notes were all part of a single piece of type, making it much easier to produce, although not necessarily clearer.

Architecture
Despite some buildings in a partly Italian Renaissance style from the reign of Henry VIII, notably Hampton Court Palace, the Nonsuch Palace (pulled down around 1682–3), Sutton Place and Layer Marney Tower, it was not until the end of the 16th century during the reign of Elizabeth I that a true Renaissance style emerged, influenced far more by northern Europe than Italy.

In summary, Renaissance started late in England, more than a century later after Italy, when Tudor Dynasty began in 1485. There was slow initial development of this cultural and artistic movement during the reign of Henry VIII that reached its peak in the Elizabethan era in late 16th century. Literature and music were the dominant art forms in this “early modern” period. Visual arts were much less significant than in the Italian Renaissance.

Why is King Henry VIII so important to the Renaissance?. (2016, Apr 30). Retrieved from https://studymoose.com/why-is-king-henry-viii-so-important-to-the-renaissance-essay 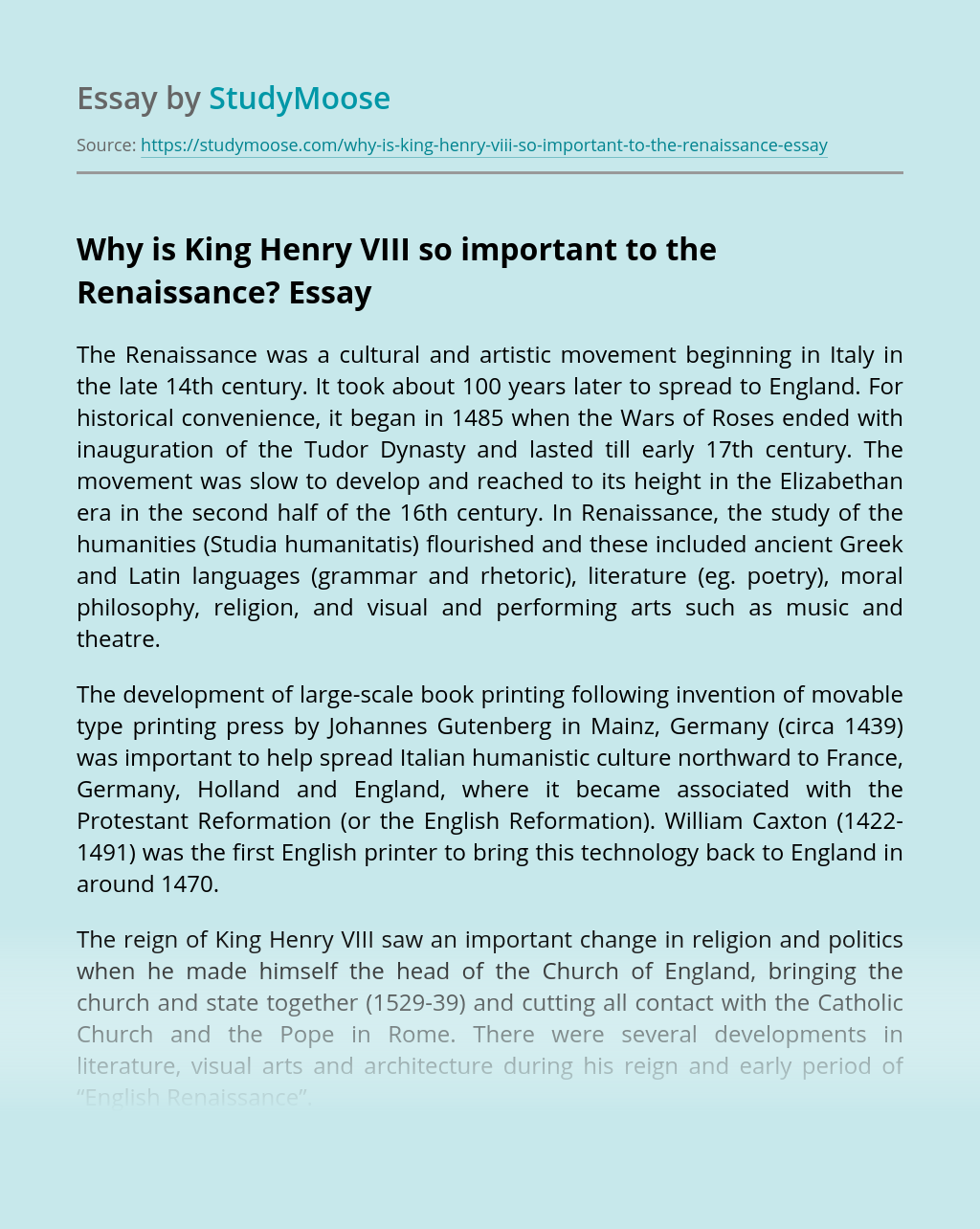