Who Was to Blame For The Death of John Proctor?

An Affair. Secrets. Witchcraft. Accusations. Hangings. In the book, The Crucible by Arthur Miller, John Proctor permanently lingers in a state of regret and anguish, for which he can only blame himself. Committing Adultery in a puritan society is a death sentence. Confused about his feelings for the young and seducing Abigail, John Proctor struggles to return to peace while trying to forgive himself, and wait for his wife to forgive and trust him. Accused of witchcraft in the midst of puritan anarchy, John must either die a good man and redeem his trust with God and his wife or live the rest of his life a conscious sinner.

Don't use plagiarized sources. Get your custom essay on
“ Who Was to Blame For The Death of John Proctor? ”
Get custom paper
NEW! smart matching with writer

At the beginning of the play, John Proctor is introduced as a farmer in his mid-thirties, that is not a partisan of the town, and shows a very strong sense of self-preservation.

The first real conversation he has with another character is with Abigail Williams, where Abigail is trying to make John tell her that loves her and that he will come again for her. John tells Abby that their affair is over with and Abby begins to plead for John’s love and he says “Abby I may think softly of you from time to time. But I’ll cut off my hand before I’ll ever reach for you again. Wipe it out of mind.

We never touched, Abby. ” John knows that he really did have an affair with Abby, but the fact that he denied it shows how at the beginning of the story, he was a man only concerned with only his own self-preservation.

Despite his adulterous behavior, John Proctor is a man that often serves as the only voice of reason during the play. In act two, in the scene where Reverend Hale asked John to recite the Ten Commandments, and John recited all except for adultery. This scene shows that John isn’t just pretending he didn’t commit a sin, but that in his mind the sin of adultery doesn’t exist by itself, it had to be triggered by Elizabeth telling John that he forgot, adultery as one of the commandments. It is from this point that John Proctor seems more willing to accept the consequences of his behavior. “I will fall like an ocean on that court! Fear nothing Elizabeth. ” Now John has a purpose for direct involvement in the trials, it is the fact that Elizabeth has now been accused of witchcraft.

He held himself to a high moral standard, not because his religion tells him to, but because he felt like it is the right thing to do. When he had his affair with Abigail, he felt like “. . . a sinner not only against the moral fashion of the time but against his own vision of decent conduct” (Miller 21). He already showed he is far from orthodox in his religion, and if he did not agree with the rules, he did not abide by them. It is doubtful he would have felt the guilt and self-loathing he did if his moral expectations were not as high as they were, whether it was the law in his church or not.

Who Was to Blame For The Death of John Proctor?. (2020, Sep 03). Retrieved from https://studymoose.com/who-was-to-blame-for-the-death-of-john-proctor-essay 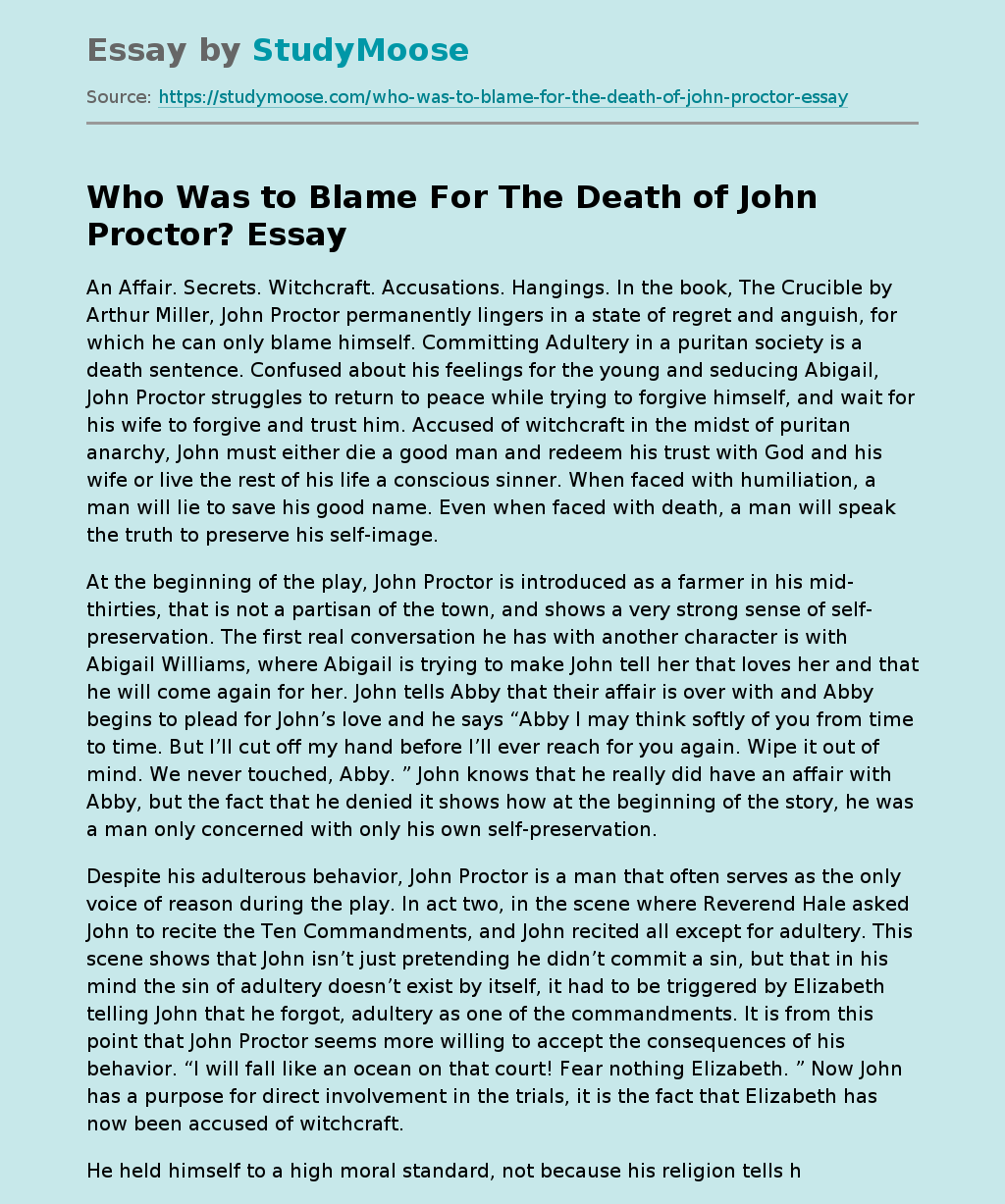