Who Is to Blame in "Long Day's Journey Into Night"?

When things are not going according to plan there are often blames and guilty consciences for the problems going on. Take family for instance, if a family has uneducated and bad-mannered kids, there are the parents to blame. And if the parents lose their minds because of the bad children that they spawned to earth, the kids are to blame. But who takes the most responsible for the suffering in the family? In the book Long Day’s Journey Into Night by Eugene O’neill, a disastrous family is portrayed.

Don't use plagiarized sources.
Get Your Custom Essay on Who Is to Blame in “Long Day’s Journey Into Night”? Just from $13,9/Page

Everyone in that family seems to be obsessed with either feeling guilty about what they’ve done in the past to make their family like this now, or blaming someone else for the problems they are now facing. Out of all characters, James Tyrone, the father and leader of the family, is most responsible for the suffering of the family because he is the person that started and led the family down a road of destruction through his bad habits of drinking and stingy spending habits.

Just like Mary is dependent of morphine, James is dependent of alcohol; they both seek to hide from their problems through drug abuse, and this has caused miscommunication within the family. Mary justifies her use of morphine through the whiskey consumption of James. They would often blame each other for their drug abuse. The true problem here is James is the one who caused Mary to be addicted to morphine; therefore, as the origin of the trouble, he should have helped her quit and recover, instead of trying to drink his way out of problems. But instead, he spends a lot of free time in saloons with hard-drink companions. If James Tyrone didn’t have such bad drinking habits, Mary wouldn’t have a reason to be strongly addicted to morphine, since their abuses of drug justifies each others’. James’ intense drinking habits have also affected his children, causing both Edmund and Jamie to be heavy drinkers that always appear drunk or drinking in every scene.

Although their family love binds them together and sometimes they try to protect each other, there are also scenes where they enhance each others’ drug abuse as Jamie pours liquor for Edmund while they talk, and when James feeds the children whiskey through spoons when they were babies. The drug abuse of the whole family origins from James Tyrone’s drinking habits. James Tyrone’s stubborn, cheap spending habits have led the family to the worst since he is not willing to spend money to let his family live a better life. James Tyrone originally had a promising Shakespearian acting career in Broadway, but once he made a very successful show, instead of continuing on the acting path to develop new and better talents, he stayed in the same show to earn more money, after he was done, he had missed the chance to improve and move one, thus destroyed his own career.

From this we can see that James Tyrone is a person that loves money, leading to his cheap spending habits where he would rather invest in land until he doesn’t have enough money left to provide his family with a good living. He wouldn’t even pay more for a better doctor that would help Mary go through birth-pain, which caused her morphine addiction. This is the largest guilt James should feel since the morphine addicted mom is what truly destroyed the family. Picture the family without Mary being addicted to morphine. Although there would still be several problems, the overall scene would be a lot better since the family would still be able to communicate with each other without constantly thinking that the mother is a drug addict.

When problems happen and there are too many people to blame, the one person that gets punished is often the leader of the pack. There is no difference in this situation, all four members of the Tyrone family have issues and can be blamed on. But there is no question that the origins of all problems are from the father – James Tyrone. Therefore, if one would be most responsible of the suffering of the Tyrone family, it would be James.

Who Is to Blame in “Long Day’s Journey Into Night”?. (2017, Jan 22). Retrieved from https://studymoose.com/who-is-to-blame-in-long-days-journey-into-night-essay 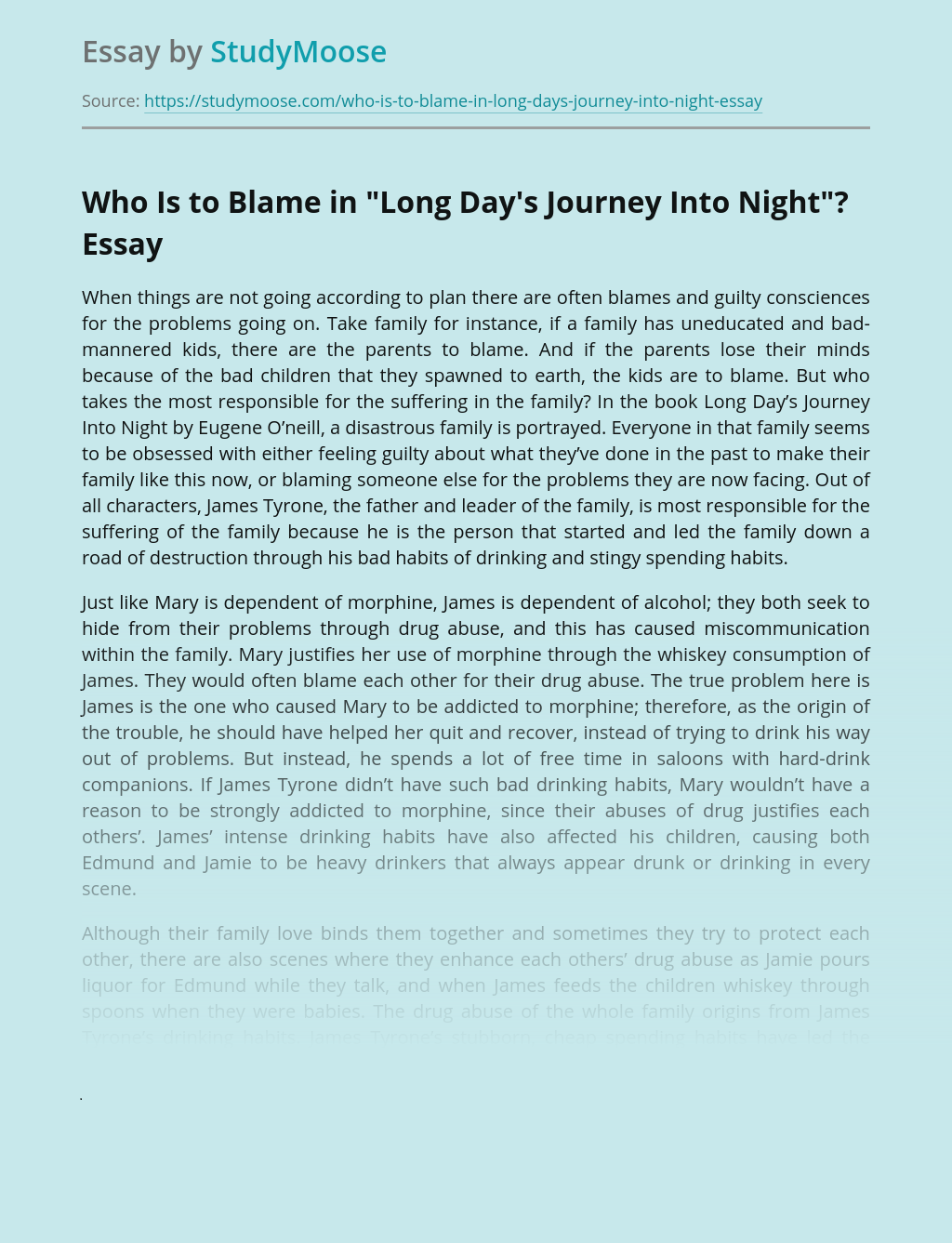 On this story, upon reading the title, I believed it will focus on basketball game and competitions however I believe I am wrong due to the fact that it was truly about a boy who had disappointments and had a hard time to endure. Early in the film, it shows a good relationship of Jim...

Thesis Statement: In this paper, I will try and analyze addiction and the various behaviors that addiction will induce in an individual, and I will also describe the kinds of addiction that an average individual is prone to, and research the efforts that are being made for an addict to try to control his offensive...

Drug is a substance that causes addiction, and it’s prohibits to treaded or grown or manufactured it only for some purposes prescribed by law. Drug addiction is one of the major problems In society. The effects of this disease are really serious. Many people get used to have drugs. Therefore, they get easily addicted to...

Drugs have been around for thousands of years. “A drug is any chemical that produces a therapeutic or non-therapeutic effect in the body (Drugs and Teen Substance Abuse 2000.)” Most drugs were first used for medicinal purposes, such as marijuana. Active substances were not extracted into drugs until the 19th century. Newly discovered substances like...

Alcohol is the ingredient found in beer, wine and spirits which causes drunkenness. Abuse of alcohol, or consumption of more alcohol than the body can handle, can lead to liver damage and other debilitating conditions. Alcohol abuse can also lead to alcoholism, or alcohol addiction, in which a person becomes physically and psychologically dependent on...