Who and what is an American?

American culture is a mixture of cultural diversity and a shared common identity which leads many to wonder what aspect should be of main focus, or at what cost does our cultural differences have to be sacrificed in order to establish a common identity. Many people dream about being an American because they envision America as the land of prosperity, peace and unity. Is it really? America is yet to be a united place of prosperity and peace when everyone who is part of it is in constant battle with one another.

Turn in your highest-quality paper
Get a qualified writer to help you with
“ Who and what is an American? ”
Get high-quality paper
NEW! AI matching with writers

Instead of being united and prosper as one, we create labels and barriers that divide each other. The importance of being united has lost its value because everyone has forgotten what being an American is all about. America is supposed to be all about the unity of people; everyone putting their differences aside and coming together as one, but instead, we are in constant reminder of the divisions and barriers that surround us.

The limitations and rights and wrongs are what make America; the diversity in cultures and race are far from it. The importance of social standing, race, rich or poor, the kind of car a person drives, are all elements that create this concept of what an American should be. Being wealthy, living in a nice home, having a high salary paying job is what we call the “American Dream”, but what does that even mean? This type of image we are encouraged to live by is what has caused this misinterpretation of the word American.

Being an American means being proud of your nationality and embracing your differences. Forming relationships with people outside of your circle and creating bonds that unite you to someone else that is also part of this country. Like Lapham says in his article, “Who and What are American”, “ the noun apparently means nothing unless it is dressed up with at least one modifying adjective.” (Lapham, 558) The point he makes is that we label people by the color of their skin, race, and religion, instead of referring to them as American.

If America was truly a culturally diverse nation and we sincerely shared a common identity by simply being American citizens, as Lapham states, it would be normal to see a black man with a white woman. People would not frown or comment on it because it would not be unusual to see two Americans together despite their physical appearance. Media, billboards, and even magazines are used to influence the image of similar ethnicities together. For example, the television, there are channels with only African Americans, or Asians, Whites, etc. Of course, this does not mean that everything is coordinated this way but the aspect that it is put together sends off the message of what is the correct way of living life and who we are supposed to surround ourselves with.

There is unity within the people but it is between the communities they create with people that are like them; not all are welcomed. If we all believed that we are all equal, having these types of lifestyles portrayed by the media would not emphasize the cultural differences between people and send off the message of sticking together by race. The message we are being sent is that we should worry about differences and label others. Instead of sending the correct message of coming together as one and not making it a battle between who is better than the other.

We are living by stereotypes and creating our own image of what an American should be instead of focusing on what is important. We waste our time labeling one another and creating ideas of the lives we should be living. As Americans we are lucky to be able to be part of a place that is full of opportunities but the focus is not on how to better ourselves as a whole, it is a constant battle of being better than others. The meaning of what being an American is different for every single person because we have all created our idea of what we want the definition to be. America can be viewed exactly the way you look at it through a maps perspective.

Borders dividing each state and different colors used to separate them. The idea of having borders between the states is what creates an illusion of a divided community. Every state is different and is inhabited by different types of people. But within these communities, we are able to find something that ties as all together; being part of a place where anything is possible. If we continue to live by these beliefs that have been implemented in our lives, the true meaning of what an American is will be forgotten.

While many people focus on their own definitions of what an American should be, we should come back to reality and truly remember the reasons why it is such a powerful word. Being an American is something we all should be grateful for. American means to be proud, it means to stand up for what you believe in and to fight for it. American means to have the freedom to do what you wish, to practice your own religious ceremonies, customs, and beliefs. We need to also understand that with freedom comes responsibility and we must realize that we are accountable for our actions. America is not perfect, but it is one of the only countries that have rights given to people of different diversities and gender. That is what we have to try and understand instead of putting focus on things that at the end of the day do not matter.

Who and what is an American?. (2016, Mar 25). Retrieved from http://studymoose.com/who-and-what-is-an-american-essay 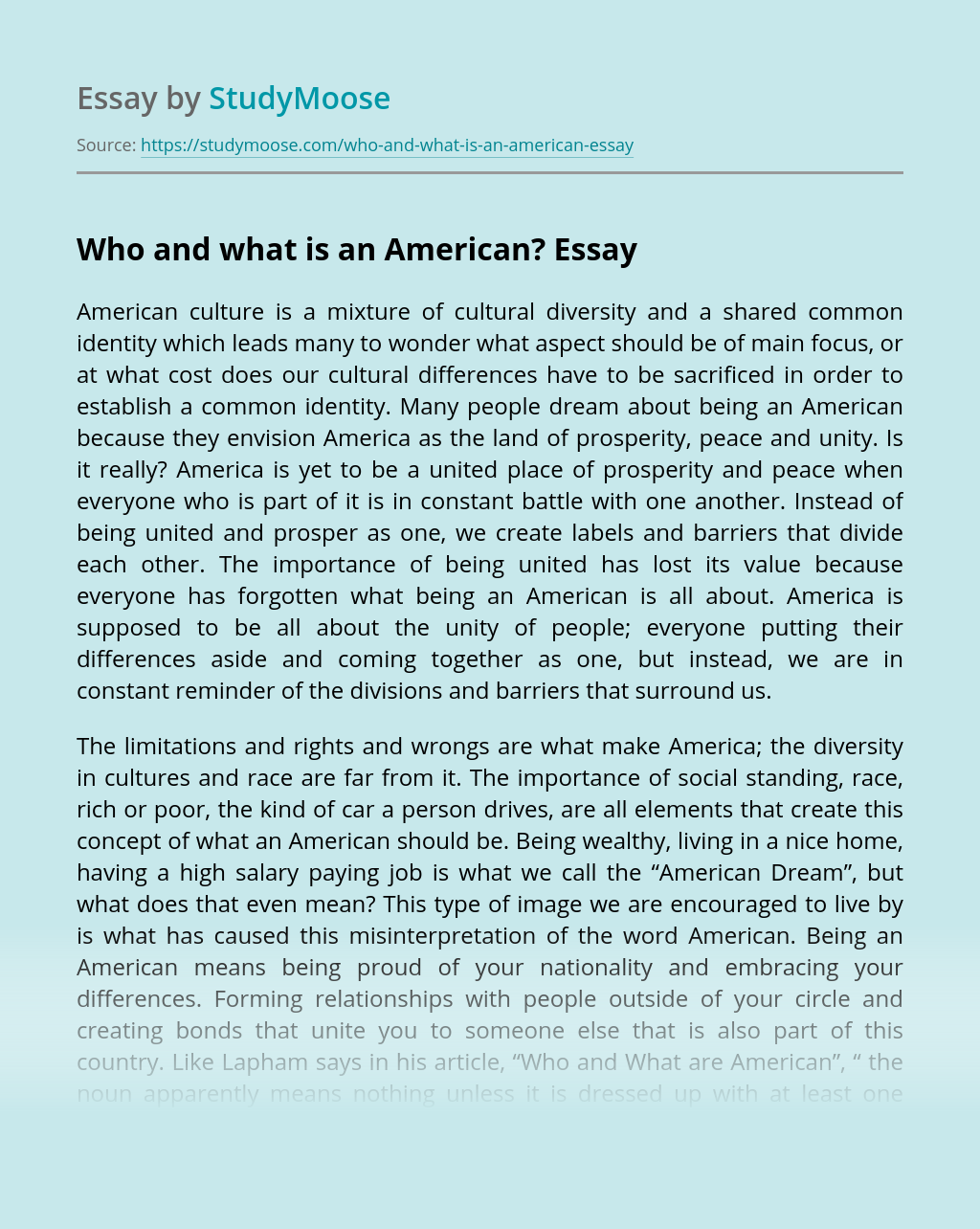 Turn in your highest-quality paper
Get a qualified writer to help you with
“ Who and what is an American? ”
Get high-quality paper
Helping students since 2015
Stay Safe, Stay Original