Where Are You Going, Where Have You Been?: Plot Overview

The short story, “Where Are You Going, Where Have You Been?” by Joyce Carol Oates focuses on the summer of the main character Connie and ultimately what happens when Arnold Friend goes to her house one afternoon when she is home alone. Arnold Friend victimizes Connie, a self-absorbed teenager, and it is implied that the story ends with something unspeakable happening to her. Oates drew inspiration for her story from a Life magazine article about a serial killer in Tucson, Arizona, and the music of Bob Dylan (WSJ).

Don't use plagiarized sources. Get your custom essay on
“ Where Are You Going, Where Have You Been?: Plot Overview ”
Get custom paper
NEW! smart matching with writer

The reason that this story stood out to me during my reading was that there are many different interpretations of what Oates’s message is and what the characters represent.

The hidden messages in the story represent her time period and elements of Oates’s life. Joyce Carol Oates was born in 1938 during the later years of the great depression and just a few years before the United States would enter World War II.

She grew up in Upstate New York and was encouraged to pursue an education by her parents. At fourteen, her grandmother gifted her a typewriter which allowed her to find her passion for writing. Oates wrote “novel after novel” and excelled in school. She earned a scholarship to Syracuse and eventually received her master’s from the University of Wisconsin in one year.

After marrying her husband, she taught at the University of Detroit which inspired her to write her first book, With Shuddering Fall, at the age of 28.

She has written an amazing amount of works during her time including poems, short stories, plays, and various other genres of literature. Her talent as a writer has been acknowledged in many ways over the years and in 1996 she was given the PEN/Malamud Award for “a lifetime of literary achievement.” Today she continues to write and works as a professor at Princeton University. Though Oates’s story reflected elements of 1960’s society, Where Are You Going Where Have You Been was inspired primarily by the story of Charles Schmid and the music of Bob Dylan. Charles Schmid was a man who committed three murders in Tucson in the 1960s. He was called the “The Pied Piper of Tucson” because of his ability to get the interest of young girls. Standing at only 5’4”, he wore cowboy boots with stuffed with to boost his height, used makeup to make himself look more attractive, and wore clothes that gave the impression that he was imitating a rock and roll singer like Bob Dylan. He roamed the town, luring young girls into his car and three of them were never heard from again. Arnold Friend shares many characteristics with Charles Schmid both physically and behaviorally. He is seen quoting Bob Dylan’s songs in the story. He also tries to charm Connie into getting into his car much like Schmid is said to have done to the three girls in Tucson.

Bob Dylan’s influence on society during the 1960s was great and his song, It’s All Over Now Baby Blue, served as inspiration while Joyce Carol Oates wrote her. The song’s influence on the story is impossible to ignore. For example, in a line spoken by Arnold Friend, “…I promise it won’t last long and you’ll like me the way you get to like people you’re close to. You will. It’s all over for you here…” (Oates) compared to a small piece of Bob Dylan’s song, “The vagabond who’s rapping at your door / Is standing in the clothes that you once wore. / Strike another match, go start anew / And it’s all over now, Baby Blue.” The mention of the “vagabond” (meaning traveler) by Dylan instantly one think of Arnold Friend and the obvious parallels in wording suggest that Oates had his song in mind when writing her story. For example, while reading the line “Strike another match” it is hard not to think of Arnold Friend’s threat to burn down Connie’s house.

Joyce Carol Oates uses Connie’s perception of time to demonstrate Connie’s character and superficiality and shows that her failure see past what is happening in the present is what leads to her downfall. In the essay “The Eternal Present in Joyce Carol Oates’s, Where Are You Going, Where Have You Been?” Michele Theriot, Assistant Professor in the Department of Languages and Literature at Nicholls State University, writes, “for almost the entire duration of her story, Connie is locked in the present, a present that has no sense of the past, a present that is wholly uninformed.” Theriot makes this point because Connie only concerned with herself and what is happening to her in the moment. For example, Connie’s self-image is based on how people see her, and she judges others the same way. When she sees her mother she thinks that at some point in the past her mother was pretty, but it does not matter because now she is no longer pretty. The only time Connie thinks about the past or even the future is when it is self-serving.

Where Are You Going, Where Have You Been?: Plot Overview. (2020, Sep 15). Retrieved from http://studymoose.com/where-are-you-going-where-have-you-been-plot-overview-essay 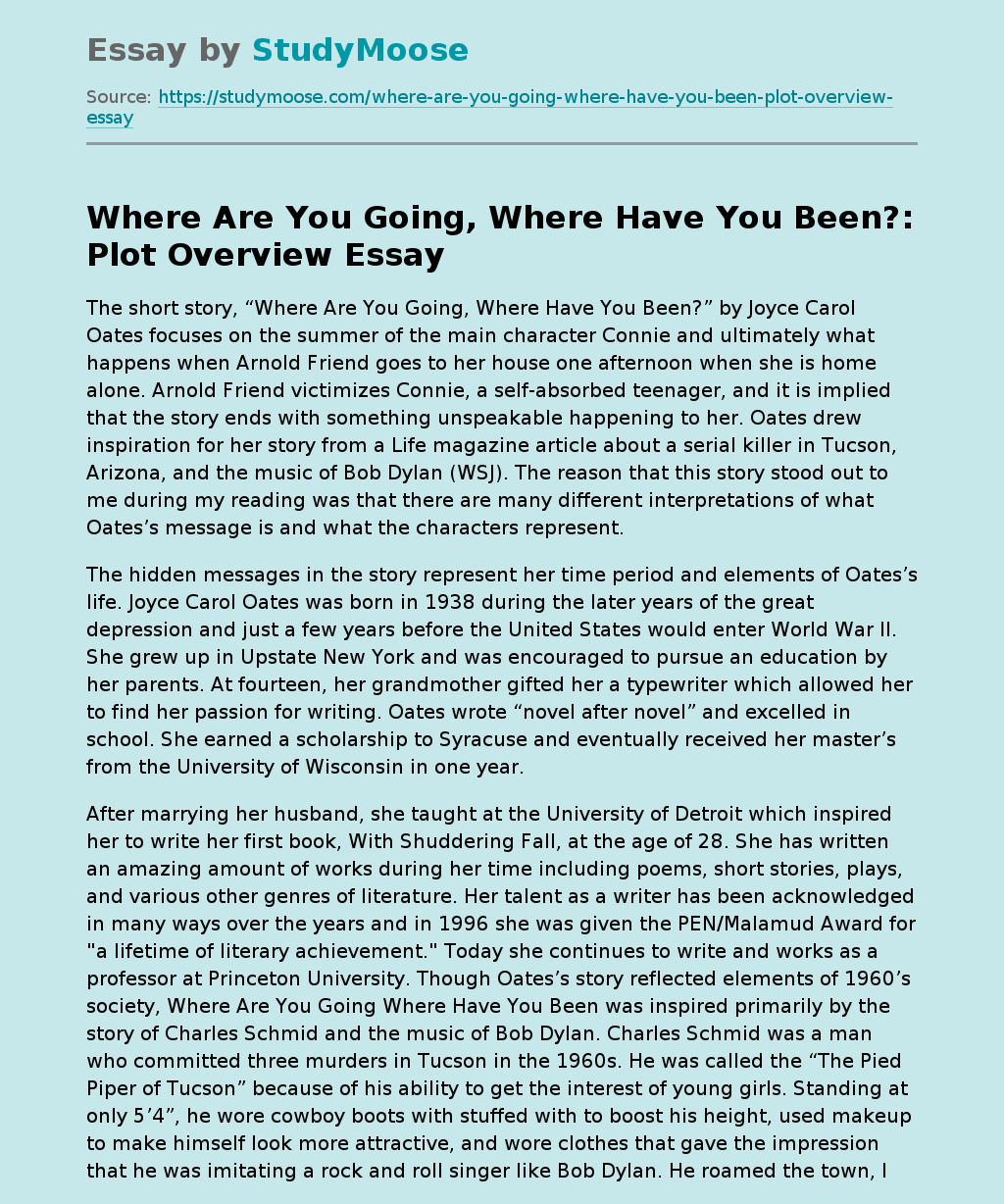