What were the roots of the Scientific Revolution?

The scientific revolution was a period of time, during the 16th and 17th centuries in which historical changes in intellectual thoughts and beliefs took place The changes occurred in two different areas, astronomy (the solar system) and biology (anatomy and physiology).This revolution was such a major milestone for man because it changed the way people looked at the world of nature and man.

The emergence of the scientific revolution was brought about by several intellectuals; Copernicus, Galilei, Kepler, Brahe and Newton.

Turn in your highest-quality paper
Get a qualified writer to help you with
“ What were the roots of the Scientific Revolution? ”
Get high-quality paper
NEW! AI matching with writers

Supporting the Copernican theory were Johannes Kepler and Tycho Brahe.

Brahe complied over 20 years of astronomical data which Kepler used. He discovered 3 laws of planetary motion that confirmed and modified the Copernican theory.

Next there was Galileo Galilei. He was the first European to make observations of the heavens via a telescope. Galileo who discovered the first four moons of Jupiter and that earth’s moon is bumpy and not smooth, also generated the law of inertia.

Finally we have Sir Isaac Newton. He was an English mathematician and physicist, considered to be the greatest scientist to ever live.

Newton used the works of Copernicus and Galileo in his own theory. He discovered the law of universal gravitation. He also began calculus and discovered that white light consisted of all the colors of the spectrum.

Those who helped with the emergence of the biological portion of the Scientific Revolution were the following; Galen, Paraclesius, Versalius, and Harvey.

Galen was a Greek doctor during the medieval times. He dissected animals instead of humans to produce his pictures of the human anatomy. He introduced the 4 doctrines of bodily humors used to treat diseases.

Three other figures credited with making changes to medicine were Paraclesius, who rejected Galen’s work. He’s also known as the father of holistic and homeopathic medicine. Andreas Versalius, who studied Galen and rectified some of his errors using the hands on approach. Lastly, William Harvey dealt a severe blow to Galen’s theories. Also, his own theories of the circulation of blood, laid the foundation for modern physiology.

What were the roots of the Scientific Revolution?. (2016, Aug 03). Retrieved from http://studymoose.com/what-were-the-roots-of-the-scientific-revolution-essay 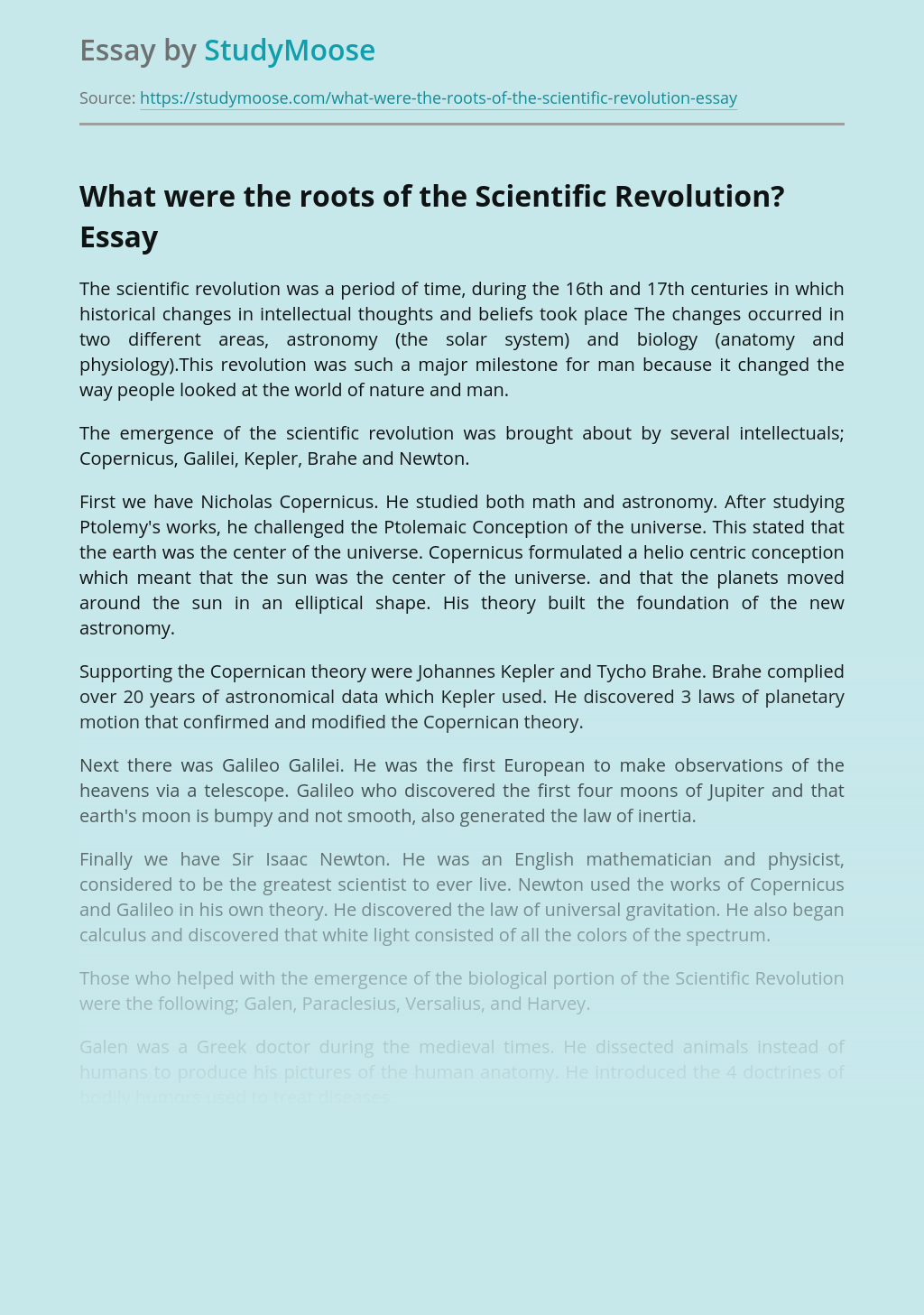 Turn in your highest-quality paper
Get a qualified writer to help you with
“ What were the roots of the Scientific Revolution? ”
Get high-quality paper
Helping students since 2015
Stay Safe, Stay Original