What Was Brown V. Board Of Education?

The Supreme Court case Brown v. Board of Education of Topeka in 1954 revisited the “separate but equal” doctrine. The court first ruled in 1896 in the Plessy v. Ferguson case that racially segregated facilities were legal. The Brown case was a major turning point during the civil rights movement. The court ruled unanimously that the racially-based school segregation was unconstitutional. This case set an important precedence for the future of civil rights. Following the Supreme Court’s decision on Brown v. Board of Education, there was much outrage and opposition, especially in the South.

Don't use plagiarized sources. Get your custom essay on
“ What Was Brown V. Board Of Education? ”
Get custom paper
NEW! smart matching with writer

The White Citizens’ Councils were formed to pressure political leaders to oppose court-ordered integration. In 1956, 96 of the 128 southern senators and representatives signed the Southern Manifesto criticizing the Supreme Courts’ decision. In the summer of 1957, the Little Rock school board worked to implement its mandated desegregation plan.

However, Governor Orville Faubus foiled their efforts out of fear that he would not be reelected if he didn’t oppose the racial integration of schools.

Faubus called on the National Guard to prevent the first African American students from attending Central High School. After three weeks, a federal judge ordered the National guard off the school grounds. People were outraged and there was a white mob outside the school. In the end, President Eisenhower dispatched units of the 101st Airborne Division to break up the mob, restore order, and protect the students. After serving two full terms as president, Dwight D. Eisenhower gave his farewell address in 1961. In his speech, he talked about his concerns about planning for the future and the risks of deficit spending.

He also talked about the importance of the military-industrial complex and how there should be checks on it to prevent it from becoming all-powerful and out of control. He stated the importance of conserving our resources and protecting out government we can continue to prosper with freedom and in peace. I enjoyed all of the readings.

The ones that stood out to me the most were “Brown V. Board of Educations of Topeka”, “Southern Declaration on Integration”, and “The Situation in Little Rock.” It was interesting to learn about the Supreme Court case of Brown V. Board of Education. This was an important case and set major precedence for the future of the Civil Rights movement. It ruled that the “separate but equal” doctrine was illegal. Although many were excited to have equal rights, this ruling faced significant backlash. The White Citizens’ Council used economic pressure to force political leaders into opposing integration. Ultimately, this group was successful and had 96 southern senators and representatives sign the Southern Manifesto.

“The Situation in Little Rock” also showed the effects the court’s decision had on the south. There was major opposition to the racial integration of schools. It was so great that President Eisenhower dispatched the 101st Airborne Division to diffuse the mobs, restore peace, and to protect the black students. It is fascinating to see how drastically people reacted to the court’s decision and the measures people took just to prevent racial integration. These people felt that the “separate but equal” doctrine was good enough and want things to remain segregated. They didn’t understand that these separate facilities were not truly equal.

What Was Brown V. Board Of Education?. (2020, Sep 15). Retrieved from https://studymoose.com/what-was-brown-v-board-of-education-essay 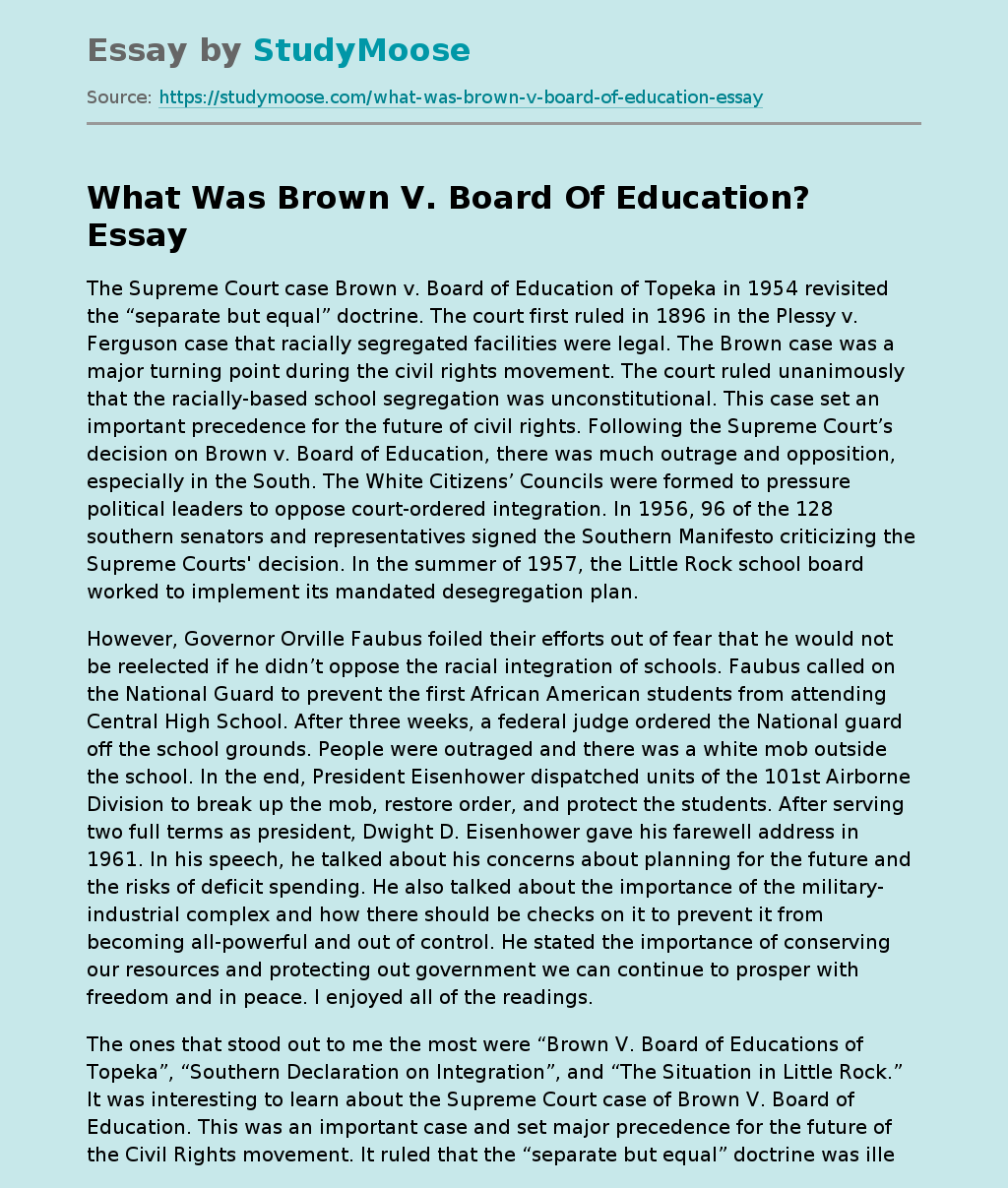