What use does Steinbeck make of animals and animal imagery in ‘Of Mice and Men’?

Don't use plagiarized sources. Get your custom essay on
“ What use does Steinbeck make of animals and animal imagery in ‘Of Mice and Men’? ”
Get custom paper
NEW! smart matching with writer

Which, one has to fully understand the book to finally see all of the signs and warnings that Steinbeck gives the reader using animals.

Firstly, Steinbeck uses Animal Imagery to convey Lennie’s Character by using them in similes and metaphors, always in comparison to Lennie. The usage of animal simile is a subtle way of Steinbeck portraying Lennie as he is portrayed, with out telling the reader directly that Lennie is this or that.

Within the first chapter, where Lennie and George are introduced, Steinbeck uses similes a lot to depict Lennie: dragging his feet a little, the way a bear drags his paws, and, Lennie dabbled his big paw in the water… this is extremely elusive to a reader as you have to analyze it further to understand it further. It a person is to be killed by a bear, it is not likely to have been mauled by its teeth, but rather its paws, as that is where the bear can channel all its weight and strength.

This is rather like Lennie, and implies that Lennie is extremely strong. The next description of Lennie is a comparison to a horse, and showing that he acts instinctively, like a horse: drank with long gulps, snorting into the water like a horse. Lennie and a horse are similar in the way their mind works: if its thirsty it eats, if its hungry it eats, if its tired it sleeps. They do this without any real thought about what going to happen when they next become hunger, or next become thirsty. Even a simple simile like Strong as a bull, implicate that Lennie is extremely strong, but not much else.

Even within the conveyance of Lennie’s character, Steinbeck is constantly using animals to foreshadow certain events within the book, and that when they happen, the reader can notice similarities between what happened to the animal and what the animal normally does. As previously mentioned, a bear’s paws are the most dangerous part of its body, and having Lennie’s hands compared to a bears paws warns the reader of something that might happen, and that he could very well be dangerous, as is discovered further on in the book.” …

Jesus Christ, somebody’d shoot you for a coyote if you was by yourself…” Without knowing it, George is foretelling exactly how Lennie is going to die- shot in the head quickly and, if not left for George to kill him, ruthlessly. When Candy’s dog died, it was a mirror image of what was going to happen to Lennie, but not only did it foreshadow this to the reader, but it also allows the reader to understand better why George killed Lennie the way he did. They were both killed physically in the exact same way- back of the head, no pain, and a quick, easy death. But looking into it further, Lennie’s death was a much gentler death then Candy’s dog ‘s death. Lennie was killed by George, in the comforting surroundings of the brush near the river, being told about the dream, one last time before he died, contented and blissful. Candy’s dog was killed by a stranger that had no compassionate feeling for the dog, and so did nothing to make sure that he was at peace before the death, just during the initial impact of the bullet.

The scene depiction at the beginning is important, as it is that place where Lennie will eventually die. They make the brush seem like such a peaceful natural place, that Lennie seems to be finally at peace when he dies. The scenery around which Lennie dies is very important, as it is another comparison the Candy’s dog. Candy’s dog was in a reasonably recognisable environment but it wasn’t peaceful, or particularly welcoming for him, it was just the most convenient place at the time. This was the same will Lennie’s death except form the fact that George told the story of his dream, one last time to make sure that George was at the peak of his happiness when he joined the deceased. The animals larking about silently tiptoe around the brush, as if they know what a serene dwelling it was. At the beginning of the first segment, the descriptions of the environment around them is very tranquil and all the animals seem to live in harmony with each other but in the last segment of the book, it doesn’t work so well, an you start to see that wildlife can never be that perfect, and for wildlife to be excitant, death is a necessity.

‘Of Mice and Men’ was always centered on this dream that George, Lennie and later on Candy all had and shared with each other, and of course animal make up a cast majority of this dream. George always described the place vividly to Lennie, the most descriptively when taking both to Lennie and Candy, using animals like a schoolchild to make the place seem more lifelike. ”An’ we could have a few pigs…An’ when the salmon run up river we could catch a hundred of ‘em an’ salt ‘em down…Ever; Sunday we’d kill a chicken or a rabbit. Maybe we’d have a cow or a goat…

An’ we’d keep a few pigeons to go flyin’ around the win’mill like they done when I was a kid…We’d have a setter dog and a couple stripe cats…” The imagery by George is so vivid you can tell that he was basing it of something that he knew and had experienced, which make you think that everything that he described is exactly what he used to have- the pigeon represent a sense of normalcy, the poultry animals represent food and having plenty, and the more domestic animals represent the love that George thrives fro, and meaning that he might not just want pets in the house.

The Title ‘ Of Mice and Men’ came from the quote ’the best laid schemes of mice and men, often go awry.” When this quote is used next to the novel itself, even the title was a hint of what could happen within the story, without even knowing the setting or the characters themselves. The best laid plan of Lennie and George is that if Lennie does something, he should go to the Brush, but inside George is hoping that the bribe of looking after the rabbits will be enough for Lennie. They two always had a less then ideal Plan B, where if a went astray, Lennie would go to the Brush and then the two can run off together to a new place. But soon this dream becomes to crumbling to crumble to pieces as George finally realises that he and Lennie cant do this for much longer, so he kills him, and put Lennie at peace.

What use does Steinbeck make of animals and animal imagery in ‘Of Mice and Men’?. (2016, Apr 22). Retrieved from https://studymoose.com/what-use-does-steinbeck-make-of-animals-and-animal-imagery-in-of-mice-and-men-essay 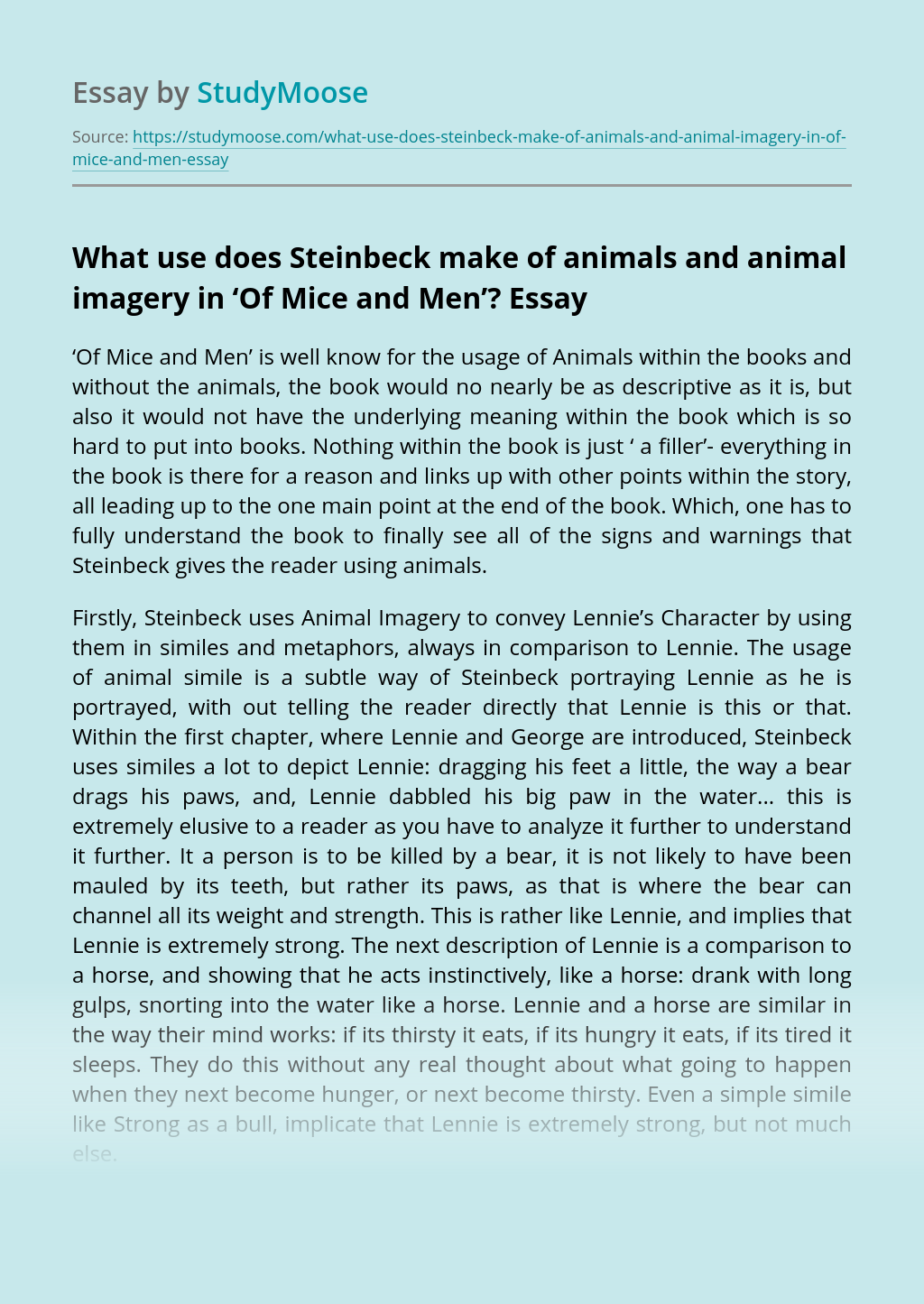