Anyone who doubts this needs to think of Othello from an imaginative point of view and the idea that it was written way ahead of its time. In the play, Shakespeare made the bold decision to tell a tale of a bewildered and doomed mixed-race marriage and ended it with a heart-breaking tragedy. When the premiered in London, few in the city had seen a black person but Shakespeare was able to bring the reality close to his generation, centuries before the same problem would fuel the tragedy that presses the modern society.

Don't use plagiarized sources. Get your custom essay on
“ What Makes Shakespeare Great? ”
Get custom paper
NEW! smart matching with writer

The play, to a literary enthusiast, is more consequential in the 21st century than it could have been in the 17th century as the cultural impacts of racism are still powerful in today’s society. Othello and Desdemona were forced to elope by a series of unfortunate events. Their eloping, opens us to the perception that Venice held about the illicit nature of their romance.

Surprisingly, to the eye of Shakespeare, the relationship was not illicit and agrees that the two love birds are entitled to their feelings and actions.

Othello and Desdemona put up an act that demonstrates that a black man from Africa has every right to fall in love with a white woman from upper-class Venice. Hollindale (1989, p45) writes that the two behave like they are from a free and civilized society and not like prisoners of a time when racism would taint such a move. The act was aimed to demonstrate to the then society that it was possible, in the distant future, to have a romantic relationship between a black person and a white person even when the same was culturally unfathomable.

Othello is a tragedy dominated by racial conflict. Through the play, it is clear that racial prejudice is poisonous and can easily transform lives into hell. Othello as a character is a perfect representation of this. He is a decorated soldier, a Moor, who has dedicated his life to the service of others and has demonstrated the same beyond reasonable doubt. His service is as good as his avoidance of crossing cultural and social barriers more so, through marriage as examined by Vaughan (1996, p.7).

Othello must always remember that he is a black man whose society looks at using its racial eye. The language that is used to refer to Othello is foul and characteristic of racial prejudice. Characters like Iago, consistently remind and erect barriers to Othello and cannot bear his success and race, leave alone marrying a white woman. Adelman (1997, p125) calls the behavior of Iago as eroticizing and racializing’ when viewed from the perspective of Othello. When Othello committed that one cardinal sin, it suddenly became the color of his skin that would be used to interpret all of his actions. His life was turned around and made miserable.

To put the place where blacks were held by the cultural and social context of Venetians into perspective, it is important to explore the venomous rage of the society whose moral fabric was threatened by the mere relationship of Othello and Desdemona. In the Venetian Senate, Brabantio fired the first salvo and said, ‘Bond-slaves and pagans shall our statesmen be’ (98-99). At the senate, Brabantio painted a picture reflective of the perspective that more would be at stake by allowing the union, not just dishonoring Desdemona’s father. Should the union be allowed by the society to proceed, Brabantio was convinced that the inferiors (black people) would be elevated to a level where they would be Venetian equals. His sentiments were seconded by Roderigo who sarcastically refers to Othello as ‘the thick lips’ (1.1.66), his skin and other features as expressed by Braxton (1990, p7). Much more vulgar language was used in reference to Othello to show the societal disapproval of his bold actions.

In fact, he felt that a black man courting a white woman was tantamount to controlling the white world. Historically, by the mere fact that blacks were slaves, the society expected them to remain subservient so as to remain at the pace set by history. Racial prejudice comes strongly as a precursor for sinister plans. Iago makes Othello suspicious of his wife. At the beginning, Othello was an individual who had a strong conviction of his persona but as he gets castigated due to his race, the feeling of inferiority sets in. Iago manages to turn other people against Othello through his weird and twisted concept of what being black means and he even makes an attempt to direct Othello’s mind that he is being cheated.

The alienation that he faces, as expressed by Г—zen (2004, p3) is directly related to his ethnicity, culture, and race which makes him feel alienated by the white society that he lives in. The feeling of mistrust spirals down to Desdemona, whom he thinks is not of his caliber. Towards the end, as expressed by Little (1993, p 306), Othello kills Desdemona as their marriage was the source of his blackness. In conclusion, it is clear that racial prejudice was deeply entrenched in the Venice’s society. Othello as a representative of the black race is seriously undermined despite his service to his community.

Due to racism, he is forced to hate his wife whom he associated with the beginning of racism. Shakespeare was able to bring out the concept earlier than it happened and did so using a tragedy which ends catastrophically. Characters in the play, in their natural behavior, brought out the different perspectives that the society held for blacks, despite their commitment to their societies. It is unfortunate that the same happens today.

Г—zen, Г—zlem. “Struggle for Meaning and Order in Hamlet and Othello.”. Anadolu

What Makes Shakespeare Great?. (2020, May 02). Retrieved from https://studymoose.com/what-makes-shakespeare-great-essay 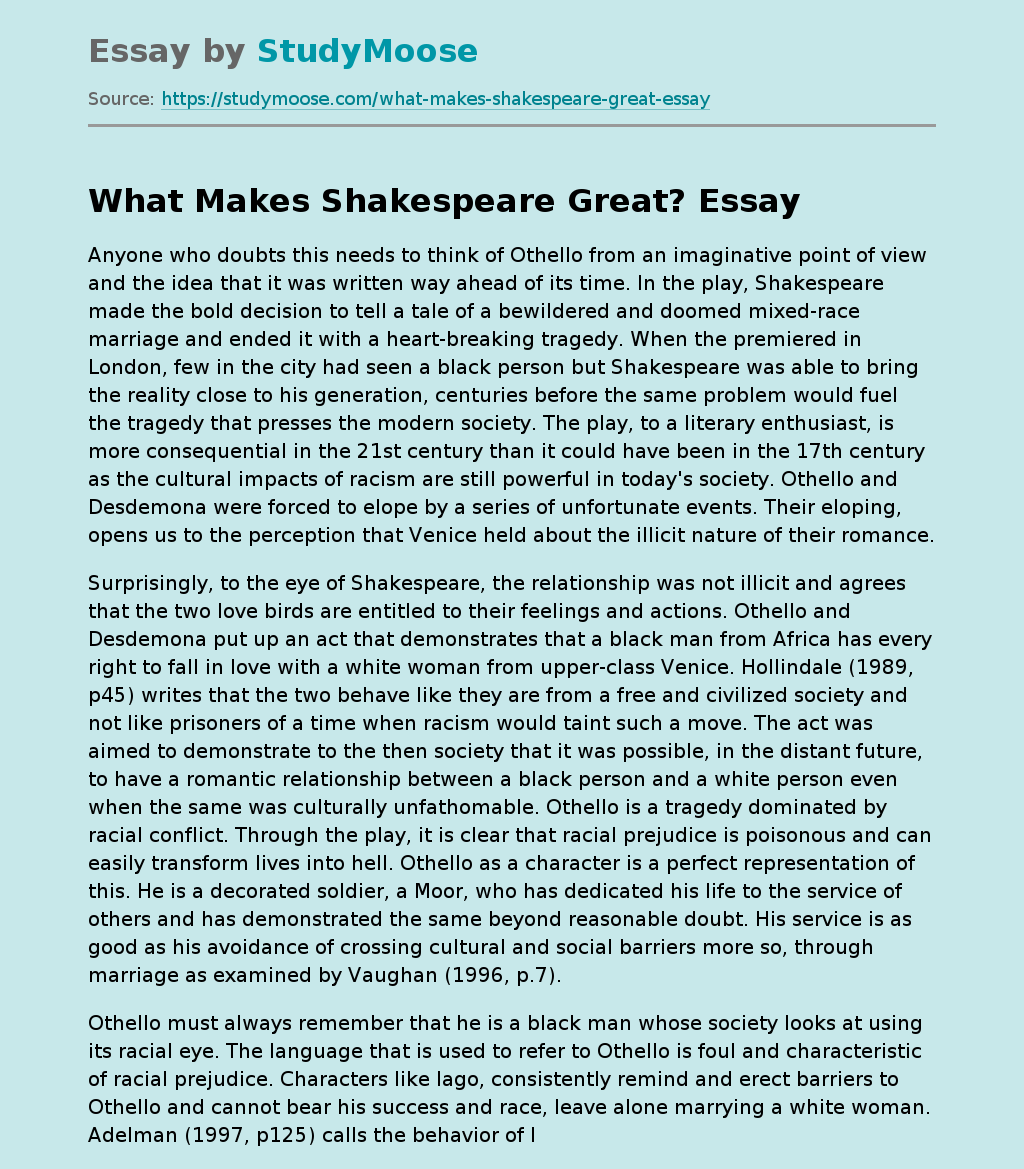