Macbeth and How He Makes Decisions

“In the long run, we shape our lives, and we shape ourselves. The process never ends until we die. And the choices we make are ultimately our own responsibility”-Eleanor Roosevelt. In the play Macbeth by William Shakespeare the protagonist Macbeth makes decisions with greedy and malicious intent that shape who he is as a person by making him selfish and violent. Furthermore, these new character traits affect Macbeth’s future decisions and actions that he makes for the rest of his life.

Don't use plagiarized sources. Get your custom essay on
“ Macbeth and How He Makes Decisions ”
Get custom paper
NEW! smart matching with writer

Several times throughout the story supernatural forces show Macbeth prophecies. He believes theses prophecies will come true and inturn they inspire hateful actions. Despite their influence Macbeth’s actions are still his own. The quote by Elonor Roosevelt can relate to how Macbeth is persuaded by his wife to commit terrible crimes he would not have even thought of, his decision to follow through with these malicious acts is ultimately his own responsibility. These choices that Macbeth makes lead him to his downfall and eventually death.

Macbeth is responsible for what he chooses to do with the witches prophecies and he also has power over lady Macbeth and can refuse to do as she commands. Even Though there were some external influences, Macbeth is the one who chooses to do most horrible evil crimes for his own personal gain. Proving that Macbeth based on much evidence is responsible for his actions that lead him to his demise.

One external influence is the three witches and their prophecies. Though they may have given Macbeth the idea of being king, and inspired the beginning of his malicious acts, they never forced his actions.

The witches never tell him how he will become king or what he has to do to make the prophecy a reality. This is proven as the only thing the witches mention about being king to Macbeth is when they proclaim “All hail, Macbeth: that shalt be king hereafter.” (1.3.53). This quotes clearly show that the Three Weird Sisters are telling him that he will be king but never say how. Macbeth on his own decides to tell his wife about the prophecies and together they plan to kill Duncan, so he can steal his crown and become king. Macbeth never considers any moral or legitimate ways to become king he chooses to follow an immoral path to gain power. Macbeth’s first irreversible action that puts him on the path to his downfall is killing King Duncan, which he does of his own freewill. When Macbeth hallucinates a dagger floating in front of him leading him to Duncan’s room he is not frightened, instead he is invited by it and chooses to follow it. This will result in him commiting the two most serious crimes murder and treason. This is shown when Macbeth says “Is this a dagger which I see before me, The handle toward my hand? Come, let me clutch thee” (2.1.40-41). As stated in the quote Macbeth never stops to contemplate how killing is an immoral way to become king and reflect on his actions. Instead he pulls out his own dagger while continuing to follow the floating one to Duncan’s room to kill him. During Macbeth’s final encounter with the witches they create an apparition that predicts he won’t be able to be killed by anyone born of woman. This prophecy causes Macbeth to believe that he is invincible and unkillable which influences his actions. The witches do not force Macbeth to act recklessly or carelessly he chooses to act this way based on his understanding of the profecia. The second apparition that appears before Macbeth is a bloody child and it tells him, “laugh to scorn The power the power of man, for none of woman born shall harm Macbeth.” (4.1.86-88). The witches apparition caused Macbeth to believe that he cannot be killed even though that is not what the apparition said. Macbeth then allows the prophecies to influence his actions. A clear example is when Macbeth chooses to take his anger towards Macduff out on his family and kills them all believing that there will be no consequences for his actions. Though the witches may have influenced Macbeth using prophecies and apparitions, he chose to commit the vicious act of killing on his own.

Another major influence on Macbeth choosing an immoral path to become king was his wife Lady Macbeth, as she thought of the idea and plan to kill Duncan and tried to convince Macbeth to follow through. Ultimately Macbeth is a man and has a lot of power over his wife due to the gender inequality of the time period that the story takes place in, and could have refused her. Lady Macbeth is treated more delicately because she is a woman and is not seen as an equal to men. After King Duncan is killed, she demands to know what happered and Macduff says, “O gentle lady,’Tis not for you to hear what I can speak: The repetition, in a womans ear, Would murder it as it fell.” (2.3.92-95). This quote shows that men is this time period see women as weak and delicate, Macbeth could have used this to his advantage and told lady Macbeth that she was a woman and did not know what she was talking about or simply just ignored her as she had no authority over him. If Macbeth chooses to use his power to tell his wife “no” he never would have begun on a destructive path instead he chose to listen to her and follow her plan. When Macbeth arrives home he tells Lady Macbeth that King Duncan will be dining at their house tonight she tells him her plan “look like the innocent flower, But be the serpent under it. He that’s coming must be provided for: and you shall put This night’s great business into my dispatch ” (1.5.72-75). After lady Macbeth speaks Macbeth does not challenge her or tell her that it is immoral to become king this way he simply says that they will speak about it later. If Macbeth had said something to Lady macbeth then the story would have been much different, if Duncan was not murdered by him, Macbeth could have taken a righteous path to become king. Later on Macbeth says “We will proceed no further in this business” and “I have bought Golden opinions from all sorts of people” at this moment Macbeth is trying to act nobley and keep the honor he has earned in battle and as a result he no longer wants to take part in Lady Macbeth’s evil plan. Though, his opposition to her plan only lasts a short while as Macbeth allows Lady Macbeth to get under his skin. Lady Macbeth is ruthless and insults him in hopes of getting her way “wouldst thou have that Which thou esteem’st the ornament of life, And live a coward in thine own esteem, Letting “I dare not” wait upon “I would,” Like the poor old cat i’ the adage?” (1.7.44-48). In this quote Lady Macbeth calls him a coward and even goes as far as to compare him to an old can from a story. Macbeth chooses to allow these insults to bother him and after further provocation agrees to go along with her plan. Macbeth makes the decision to take an unhonorable path in hopes of pleasing his wife and proving to her that he is not a coward. Lady Macbeth was attempting to persuade Macbeth to steal the crown through the use of insults though ultimately Macbeth is the man and has power over his wife, he could have simply said “no this is not up for discussion” instead of giving in to her. Furthermore he chose to tell Lady Macbeth about the prophecies which initially sparked her plan and created this dilemma.

Macbeth’s decisions are his own as he has free will therefore he is responsible for their consequences. Macbeth’s first malevolent act is killing Duncan although external forces including but not limited to the withces and his wife inspired him to commit the crime he chouse to follow through with the murder. The witches influence his judgement a second time when they prophecies that Macbeth will not be able to be killed by anyone born of woman, causing Macbeth to believe that he can not be killed. Due to his new fearlessness he chooses to take out his harboured anger toward Macduff by killing his family. Both killing Macduff and Duncan have major impacts on the plot as killing Duncan began his journey on an unrightful path and murdering Macduff’s family resulted in Macduff killing Macbeth. This ensured the crown returning to Malcome and the end of the play. This play relates to the real world as your actions always have consequences even if they are not visible at first or immediate.

Macbeth and How He Makes Decisions. (2021, Feb 04). Retrieved from https://studymoose.com/macbeth-and-how-he-makes-decisions-essay 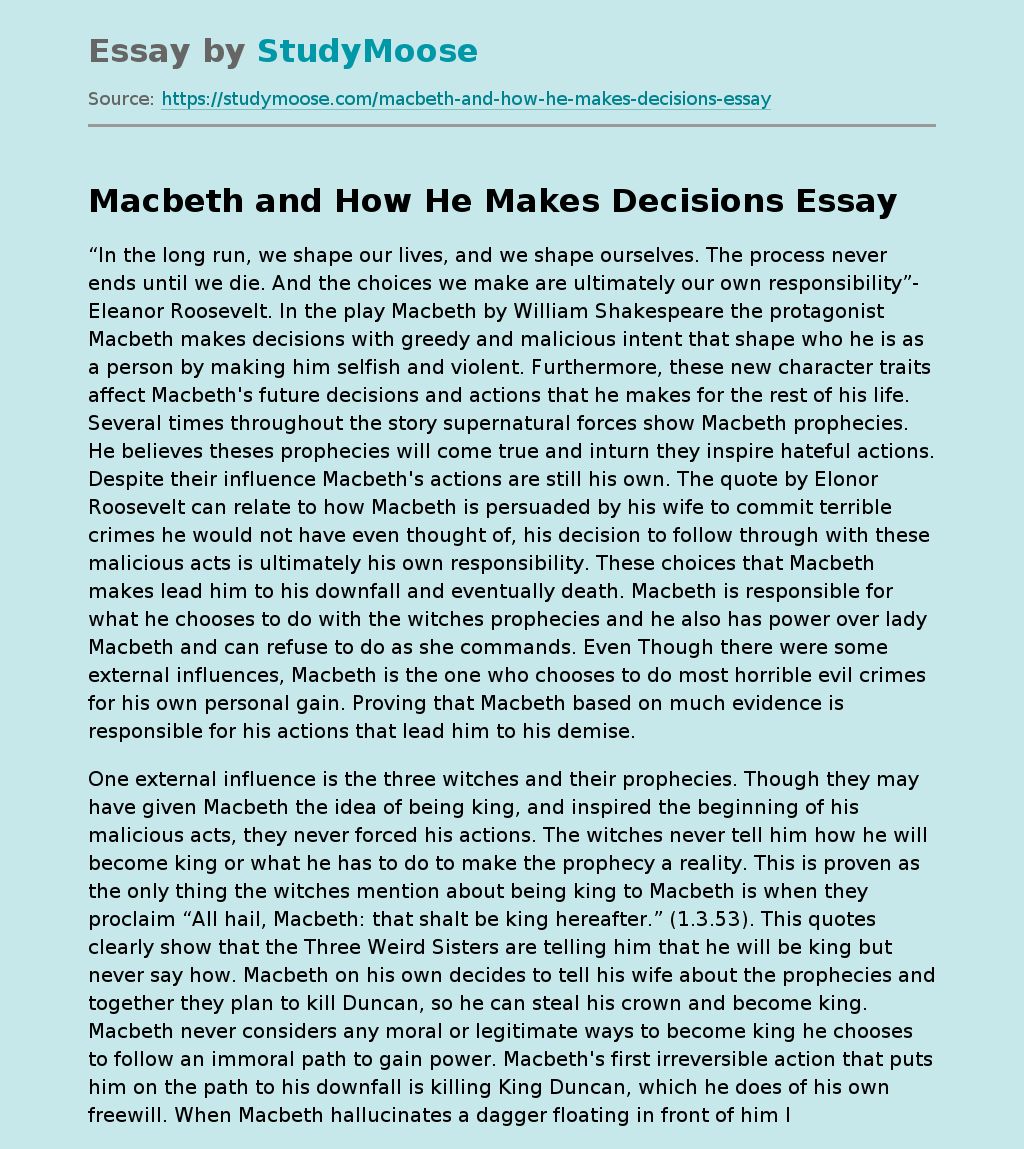