What are some of the key developments? What functions does it perform? Typography is the structuring and arranging of visual language, it is concerned with the way in which type units and type anatomy are arranged to convey a message (Baines and Haslam, 2005, p.6). The first typeface was created by Johannes Gutenberg in 1440 called Blackletter (fig 1), he invented the first moveable type which gave people a faster, cheaper way of obtaining the written word as up until this point all written materials were done by hand which took a long time and was costly to purchase until this revolutionary invention(Loxley, 2011, p.

Don't use plagiarized sources. Get your custom essay on
“ What is Typography? ”
Get custom paper
NEW! smart matching with writer

10). It was originally used for manuscript lettering and Gutenberg used it to print his own ‘Gutenberg Bible’ which was an attempt to make his type have a close resemblance to that of the handwritten bibles in order for his new product to be acceptable to his potential market (Loxley, 2011, p.13), however it’s not easy to read in a body of text as it has dramatic contrasts between thick and thin strokes and elaborate swirls on the serifs, therefore today its now best used for headings, logos and posters (fig 2).

In 1470 Nicholas Jenson created Roman type (fig 3), inspired by the text on ancient roman buildings. It was renowned for its evenness and comfortable fit of its letters as words, the proportions of the letterforms made it highly readable and appropriate for large amounts of text compared to blackletter. (‘Typographic Timeline’). Shortly after in the 1500s Aldus Manutius created italics (fig 4), this was a way for more words to be fit on a page, meaning money would be saved by the printer with the use of less paper.

Aldus was a large part of bringing ‘portable’ book to the literate masses and the first to print the major Greek classics. (Heller 2015). Today italics are usually used as a design detail or to create emphasis when writing.

Previously type designers had been copying and improving type that had been developed by their predecessors, however in 1957 John Baskerville went about designing a new typeface style that was influenced by modern calligraphic writing (fig5) . He was the first type founder of his era who took inspiration from the calligraphic trade and created a contrasting type to anyone else at the time, especially by designing type with no ornaments which would’ve seemed highly radical at that time (Beier 2015). His developed type design stood out from the previous typographers and soon led to others following in his footsteps. Giambattista Bodoni was highly influenced by Baskerville’s work along with Firmin Didot, they created the first ‘modern’ Roman typefaces (fig 6) where the contrasts were more extreme than ever before which created a new fresh look for type design (tracy 2018). John Baskerville had created a shift in focus, where early printers practiced their craft in an effort to produce beautiful functional typefaces that are clear and legible, Baskerville repositioned the focus leading to the purpose to not be only to communicate content but also create type that played a role of visualising the emerging neoclassical moment (Beier 2015) which emphasised importance on principle such as simplicity and symmetry.

Following after this came the invention of Slab serif type (fig 7). Designed by the English typographer Vincent Figgins in 1815 slab serifs were characterised by bold heavy square cornered serifs, minimal stress in rounded letters and little contrast between thin and thick strokes. This type evolved from the need for eye-catching designs and developed to be used for advertising posters and billboards (fig 8) in the early 19th Century (‘Typographic Timeline,’ n.d.). During this time many typefaces were being created to accommodate advertising’s rise due to more competition of products and in 1916 William Caslon IV created the first typeface without and serifs at all.

During the 19th century the way in which type could be printed also changed significantly. Where the Gutenberg press was largely used it still meant that you could only set one letter at a time which was time consuming, tedious and labour intensive. Between 1883 and 1885 a German – American clock-maker and inventor named Ottmar Mergenthaler invented the first ever mechanical typesetting machine that could set complete lines of type(The Invention of the Linotype Machine (Jienne Alhaideri ’13) – From Tablet to Tablet: A History of the Book 2012). By speeding up the printing process this machine revolutionised print production, first in news papers where producing frequent daily editions was required. This machine was eventually known as the Linotype.

Around the 1920s geometric type began to gain popularity. The 20s was a time where typographic innovation and invention began to flourish, and the architecture of geometric sans serif explored the structures of basic geometric forms. In 1927 the typeface Futura (fig 9) was created by German book designer Paul Renner who based the initial design on a circle, square, and a triangle, its final form however ended up not being geometrically exact and its strokes were not uniform widths. Futura embodied the current modernist movement with its lack of decoration and its architectural from and function together(Monotype 2014). Geometric type would commonly feature perfect circles for the letter ‘O’ for example, or the uppercase ‘M’ might pair two perfect triangles together. Futuristic geometric type often adopted squarish letter structures that encapsulated the technological advancement and innovation of the time. In the 1970s there was an increase in popularity of geometric type, such as Herb Lublin and Tom Carnese Avant Garde type (Haley and Al 2012).

Furthermore in the 1950s another significant typeface was created by Swiss designer Max Miedinger and Edouard Hoffman, called Helvetica (fig 10). Helvetica is minimalistic like those of the geometric fonts being created at the same time. They intended for this typeface to be neutral, clear to the eye and that to be used in a variety of ways. It became instantly popular and a staple of modernist typography design. With its sleek and modern look it was adopted for transport signs, company logos, and other marketing materials (fig 11) because of its neutrality that makes it go unnoticed(Fussell 2019), Massimo Vignelli loved this characteristic of Helvetica ‘There are people that think that type should be expressive. They have a different point of view from mine’ Hustwit, Gary. Helvetica. 2007, its functional invisibility is what made it so popular in the first place.

It is impossible for graphic designers to be familiar with each individual typeface that exists because they’re so many that can be created. Due to the advancements in technology today typefaces can be created, modified and refined easily on computers and quickly. However, knowing the origins of typefaces and the functions that significant typefaces in history had can provide stronger foundation of knowledge which helps designers understand how changing type anatomy and details of individual letters can create a different aesthetic, and help a typeface communicate visually in different ways that can be useful when approaching a brief and meeting a clients needs effectively.

What is Typography?. (2017, Feb 24). Retrieved from http://studymoose.com/what-is-typography-essay 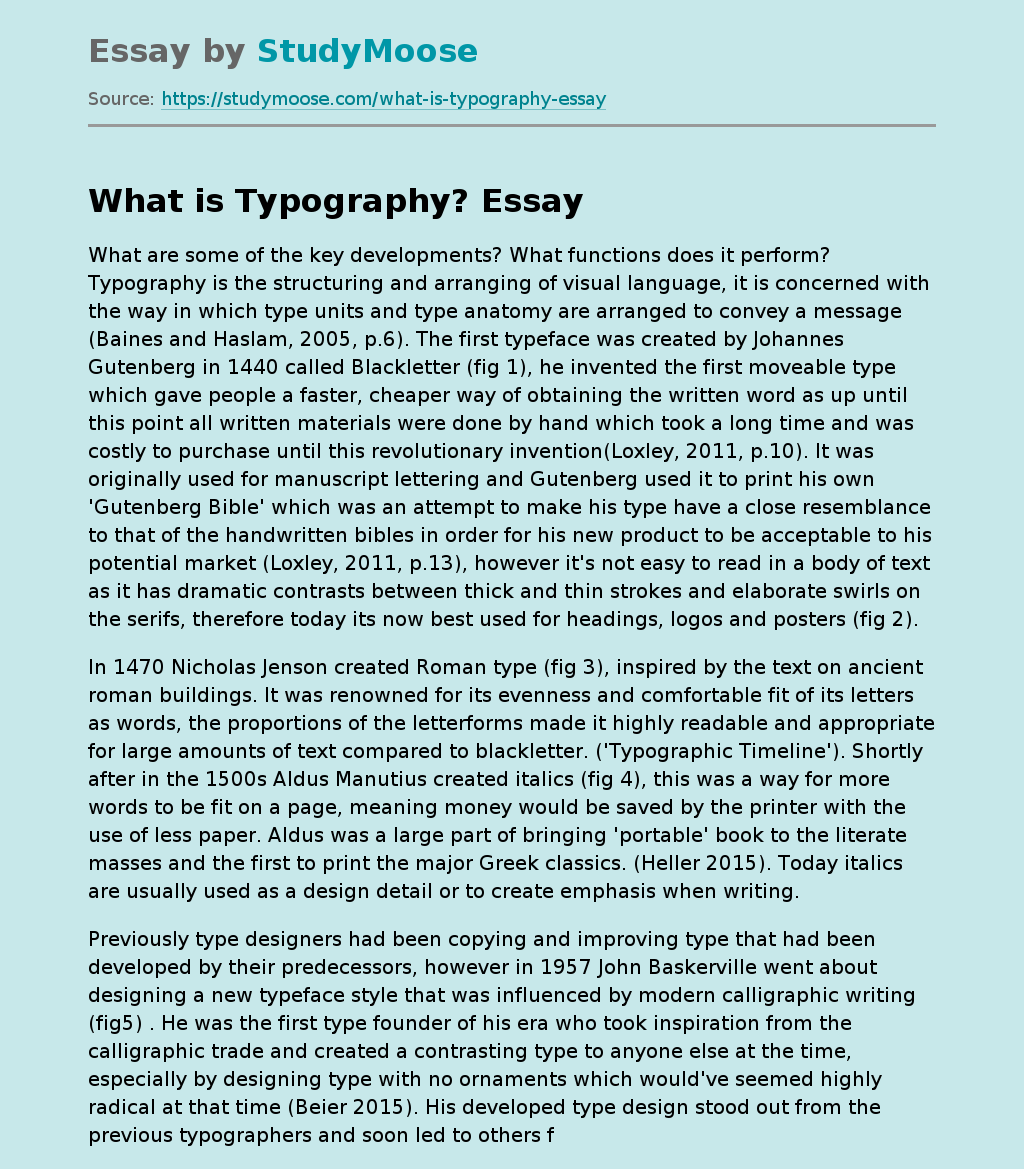