Resilience – the “Buzzword” of 2013- as declared by Time magazine due to its conceptual vagueness and malleability (Brown 2016). The origins of this “buzzword” arise from the Latin word resilient, meaning “to bounce back” (Klein, Nicholls, & Thomalla, 2003). Since early and very long, resilience was defined and used in many disciplines and in various ways. For example, the concept of resilience in relation to eco-systems is defined by Holling as a way to understand the capacity of ecosystems to absorb change, or more specifically, how to persist developing in the original state subject to disturbances and changing conditions (Holling, 1973).

Don't use plagiarized sources. Get your custom essay on
“ What Is Resilience? ”
Get custom paper
NEW! smart matching with writer

This ecological thinking of resilience defines the city as an entity with multiple forms of equilibrium that may transform and evolve over time. Contrary to the ecological unpredictable multiple equilibrium perspective, the engineering perspective of resilience is measured in terms of speed of recovery and the ability of a system to bounce back to its original condition, and thus, the engineering system has a single predictable steady-state or equilibrium to which it must return (Folke, 2006).

, and White– and therefore constantly changing despite the fact that it’s threatened by disturbances or not.

Applying the concept of resilience to cities and urban context is becoming crucial as according to the United Nations, 55% of the world’s population today lives in urban areas, and this proportion is expected to increase to 68% by 2050. Therefore, if not well-managed and planned, this rapid urbanization trend will put strains on cities’ sources and urban systems and can lead to long-term stresses. Resilience in the context of cities is defined as “Urban Resilience” (UN Habitat, 2017). Cities are complex systems that incorporate many interdepended and linked elements ranging from infrastructure and built environment to socio-economics and politics. In order to understand the meaning of urban resilience for cities, it is therefore critical to define the urban system. According to UN-Habitat, an urban system refers to the process of connectivity, interaction, operation, and organization of these elements within an urban area (UN-Habitat, CRPT).

When applied to cities, the definition of resilience remained the same; the real change was connecting it to the various changes and disturbances that cities encounter. As a result, urban resilience is an evolving concept. For example, the concept of urban resilience was extensively used in the context of urban hazards and disaster risk reduction, which is defined to be the capacity of cities, with its infrastructure, urban populations, and communities to successfully recover from both natural and human-made hazards (Leichenko, 2011). While the Rockefeller Foundation definition of urban resilience is “the capacity of individuals, communities, institutions, businesses, and systems within a city to survive, adapt, and grow no matter what kinds of chronic stresses and acute shocks they experience.”

“Resilience is viewed firstly as a framework for thinking, and secondly as an increasingly relevant issue in international development and urban studies” – Un Habitat
The UN-Habitat adds to the Rockefeller Foundation definition a vital part; that is “sustainability”. “Urban resilience is the measurable ability of any urban system, with its inhabitants, to maintain continuity through all shocks and stresses, while positively adapting and transforming toward sustainability” (UN-Habitat-CRPT).

All of this literature and conceptualization of urban resilience is trying to create guidelines for cities to face and respond to hazards, natural, and human-made. However, the study on how urban systems respond to mass displacement remains limited. People are being displaced by conflict and disasters elsewhere and end up in urban areas, or camps in urban areas. The challenge of mass displacement is global, as this rapid influx of new and possibly long-term residents put pressure on the urban systems (Kirbyshire, Wilkinson, Le Masson, Batra, 2017). Cities, therefore, face difficulties in addressing adequate basic services to the growing populations. The main challenge for host cities is how to integrate these “undesirables” and their “out-spaces” – as described by Agier M. – into the urban system of the city positively.

Research Definition – Urban Resilience in the Context of Refugees

In some countries like Jordan, Palestinian refugees are residing in camps since 1948 or 1967; meaning that they are no longer considered mass displacement as they have been residing in Jordan for more than 70 years. Resilience definition in the context of refugees is not defined yet and this research is an attempt to define it. For the purpose of this paper, urban resilience is defined as the capacity and ability of the city – with its urban elements, local governments, and stakeholders – to adapt, absorb, and integrate a rapid influx of refugees into the wide urban system while considering their socio-economic profile, and transforming positively towards sustainable communities.
“Humanitarian response alone is utterly insufficient. We must establish a solid link between the humanitarian, resilience and development dimensions.”– Antonio Guterres

What Is Resilience?. (2021, Jul 11). Retrieved from https://studymoose.com/what-is-resilience-essay 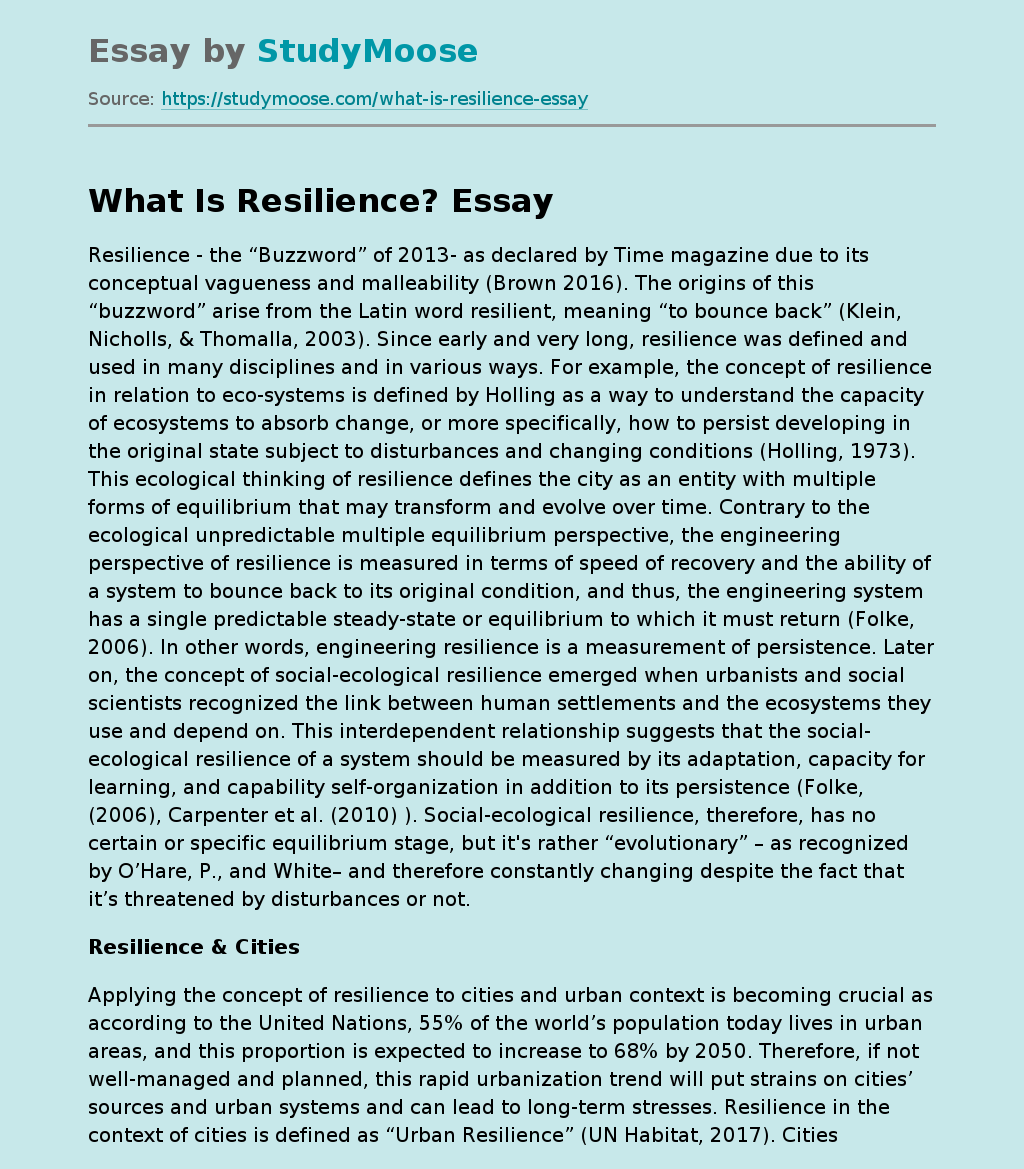