What is perfection if not dipped in pressure pushing you to the?

“What is perfection, if not dipped in pressure pushing you to the edge of insanity.” To escape the harsh and unforgiving nature of reality, individuals often attempt to cushion their experiences through the use of gentle illusions. In the wake of trauma and hardship, one often turns to falsehoods to protect oneself from pain. However, in doing so, one risks an even greater and more painful fall from grace. Illusions serve both as a tool of self preservation and as a catalyst of ruin for Blanche Dubois.

Don't use plagiarized sources. Get your custom essay on
“ What is perfection if not dipped in pressure pushing you to the? ”
Get custom paper
NEW! smart matching with writer

This is a crucial theme in Tennesse Williams’s 1947 southern gothic film, A Streetcar Named Desire. Set in New Orleans during the restless years following World War Two, A Streetcar Named Desire is the story of Blanche DuBois, a fragile and neurotic school teacher that flees her troubled life in Mississippi searching eagerly for someplace or someone in the world to call her own . Throughout the film, self preservation plays a significant role in how individuals respond to competing demands.

We see Blanche self destruct and drive herself to the brink of madness in an attempt to protect other’s views of her as a woman in society. She descends into insanity while trying to preserve the person she once was and uses her former self as a shield in order to protect herself from the harsh reality of her life. She refuses to see herself as she is but instead creates the illusion of what ought to be.

Blanche lives in the shackles of the person she once was.

Although Blanche is miserable, she can’t seem to escape or move on from her past. With every path she’s taken in an attempt to get away from her torment, she’s only managed to avoid the inevitable. With wild manifestations of her guilt, her past life finds a way into every aspect of her life. Blanche wishes to wash away her wrongdoings and start anew, but it’s evident there’s still an attachment with her to her former life. Her desire to live in the past is fueled by her fear of unstablity and failing expecataions. Discussing Blanche’s retreat from reality is critical because it’s difficult to distinguish between when she has lost her grip on reality versus when she’s simply imagining a better future full of romance and fantasy. For Blanche, the idea of illusion trumps the brutal reality of her life. Blanche employs illusion and deception as a means of self preservation, in order to survive both physically and emotionally. Blanche employs illusion and deception as a means of self preservation, in order to survive both physically and emotionally. During and following the loss of Belle Reve, Blanche is left struggling to support herself and must use deceitful strategies to protect her physical and economic wellbeing. In order to sustain herself, Blanche is forced to seek a husband who can support her financially and thus creates an illusion of purity to attract suitors. This demonstrates that Blanche’s need for physical and economic preservation cause her to deceive Mitch about her real age and nature. By concealing these aspects of her character, she attempts to maintain her attractiveness as a method of self preservation. Although ultimately her efforts to deceive Mitch into marrying her fail, the illusion she creates acts as a prospective source of stability and happiness in her future, and thus can be viewed as a tool of physical self preservation. Seeing how far she’d fallen from grace proved too tramatizing for Blanche to handle. Trying despreatly to live up to the expectations pushed upon her, Blanche continuesly uses fiction and fabrication in an attempt to maintain some regularity in her life. She’s deceitful because in her eyes in order to preserve her image of innocence and purity, she must revert back into the person she was long ago. Blanche’s inability to move past her trauma is fueled by her natural instinctive to preserve and protect people’s vision of the “perfect Blanche”. Throughout the story, we see her prioritising others opinion of her over her own wellbeing. Blanche would do anything to escape her past but is unwilling to give up the life she once led. The major flaw in Blanche’s logic was becuase of her constant lies, she slowly became unhinged believing in her decefit ful lies and believeing in their existsene. Becuase she’s living in the past, she’s subconciously clining to her former self and her traumatic losses, which are ultietly drving her over the edge.

Blanche cracks under the pressure of extreme societal expectations. Early on in the film, Blanche begins spinning her web of lies, and internalizes the idea that once her true self is revealed she won’t belong in the world. She’s ashamed and resentful at how far she has strayed from her former morals and values. The hate and resentment towards herself builds up causing her natural self preservation instincts to kick in and she becomes deceitful. Blanche also uses illusion and deception as a means to ensure her own emotional survival. As a result of the loss of her ancestral home and her socially unacceptable promiscuity, Blanche is forced to cope with misfortune by protecting herself in a shell of illusion. This can be observed in key symbols like her jewelry and clothing, which are often described as fake while having the appearance of being expensive. By wearing clothing which are intended to mimic wealth, she attempts to protect herself and others from realizing the truth about her impoverished state. Throughout the film, we see her often in minimal lightning. Constantly hiding behind shadows, and concealed light bulbs. The clear conclusion is that she’s getting older and doesn’t want anyone to see that she’s no longer young. “I don’t think I ever seen you in the light. That’s a fact! [..] You never want to go out in the afternoon. [·] You never want to go out till after six and then it’s always some place that’s not lighted much. [·] What it means is I’ve never had a real good look at you.” Of course, one might argue that Blanche is hiding more than just the wrinkles on her face. It is evident that she’s ashamed of her behavior and desperate to hide her past from Mitch. She’s manifesting this desire to hide in a physical way. “I don’t want realism. I want magic! Yes, yes, magic! I try to give that to people. I misrepresent things to them. I don’t tell the truth, I tell what ought to be truth. And if that is sinful, then let me be damned for it!” Now we see that Blanche’s fear of the strong light is about more than the age showing on her face. She’s not only hiding her appearances from the world, but refusing to look at the world in a harsh light herself. Blanche has a hard time accepting these events in her life and tries to substitute truth with illusion. Given these circumstances and her own fragile nature, it is easy to understand why Blanche feeds off magic and fantasy instead of realism. Furthermore, to avoid the societal stigma of being a woman who has had many sexual partners, Blanche attempts to protect herself by pretending to be the ideal model of feminine sensitivity. This is evident as she frequently wears white, a colour symbolizing purity and innocence. This is also seen through her constant bathing, symbolizing a desire to cleanse herself of her past. Blanche’s actions reveal that she seeks emotional survival by attempting to mask her suffering and history, through subtle acts that create the illusion of refinement and innocence. Blanche uses illusion as a tool to manipulate not only how others perceive her, but also how she perceives herself. By altering truth and reality, she is able to suppress the trauma and hardships she has had to endure, in an attempt to survive emotionally. Tennesee Williams demonstrates the human tendency to alter realities in order to cope with difficulty and to retain some degree of control in an otherwise uncontrollable situation.

Although Blanche attempts to use illusion as a tool of self preservation, it ultimately serves as a catalyst to the ruin of her reputation, and her physical and emotional wellbeing. As a result of her tendency to misrepresent reality, the revelation of Blanche’s true nature by Stanley contributes to her ultimate downfall. “I don’t mind you being older than what I thought. But all the rest of it–Christ! That pitch about your ideals being so old-fashioned and all the malarkey that you’ve dished out all summer. · I was a fool enough to believe you was straight…” The unravelling of Blanche’s deceits ultimately causes her to lose face, and costs her any hope of being happy with Mitch in the future. This passage demonstrates that Mitch’s illusion of Blanche has disappeared, and the consequences of her dishonesty are severe. Blanche loses Mitch and with that she loses a valuable chance at redemption and wellbeing. Blanche also undergoes physical ruin due to the failure of her illusions. Throughout the film, Stanley and Blanche consistently antagonize one another, and Stanley’s need to establish reality is always at odds with Blanche’s obsession with illusion. This struggle for dominance between the two reaches its climax when Blanche is sexually assaulted by Stanley. As Stanley commits this unforgivable violation, he exclaims, “We’ve had this date with one another from the beginning!” From this event, it is evident that Blanche’s final encounter with Stanley is the end result of a struggle between illusion and truth. Stanley’s character embodies the hard and cruel nature of reality whereas Blanche, in her weak and delusional state represents the weak last gasps of a crumbling facade. The play reaches a climax, in which Blanche is totally and completely ruined beyond salvation, in which her illusions have led her to her destruction. Mourning the loss of a fragile illusion and the defiant dignity once possessed by her. Following this traumatic event, Blanche retreats fully into a psychiatric delusion. Thus, physical ruin is inflicted upon Blanche due to the repercussions of her once deceitful nature.

What is perfection if not dipped in pressure pushing you to the?. (2019, Nov 19). Retrieved from https://studymoose.com/what-is-perfection-if-not-dipped-in-pressure-pushing-you-to-the-example-essay 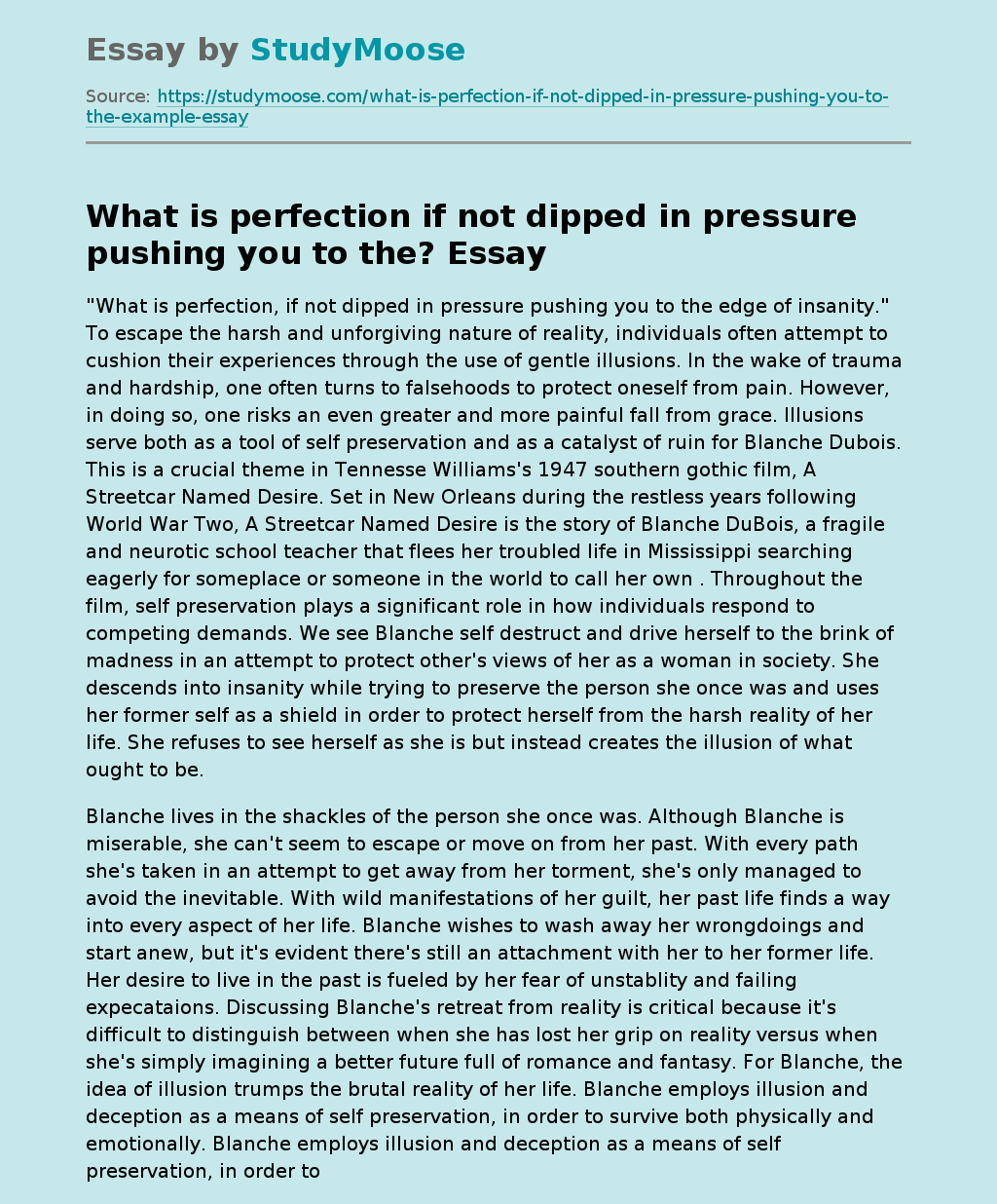