What Impact Did Stalin's First Five Year Plan Have on the Economy and People of the Soviet Union?

In 1928, Joseph Stalin developed his first plan that concentrated on the development of the Soviet Union in the global economic spectrum. Stalin proposed that electricity, coal, and iron production need be increased significantly in the following five years in order to compete with capitalist countries.

Don't use plagiarized sources. Get your custom essay on
“ What Impact Did Stalin’s First Five Year Plan Have on the Economy and People of the Soviet Union? ”
Get custom paper
NEW! smart matching with writer

Stalin’s speech will be evaluated for its origin, purpose, values and limitations.

Summary of Evidence
Before Stalin, Russia existed in a poor state. Many of the people were depressed starving, and living in poverty. (“The Russian Revolution”) Due to WWI and the Bolshevik Revolution, the number of workers in Russia had decreased from 3.6 million to 1.

The plan was set to drastically increase production of coal, oil, iron, and steel in Russia at almost unrealistic rates. (Trueman) Stalin had several reasons for creating his first Five Year Plan. He believed that the USSR should overtake the capitalist countries by improving the industry. Stalin also stated that the Soviet Union was “backward”.

He declared that to be backward was to be defeated. Thirdly, he prophesied that Germany would invade and the Soviet Union would not be powerful enough to withstand their attack.

Lastly, the Five Year Plan was used as propaganda in support of Stalin and Communism. (Clare) Because of inadequate agriculture, Stalin declared each village should unite their farms into a collective farm. He believed that by unifying the farms, agriculture would grow through Russia more rapidly. (“Stalin–Collectivization”)

The Five Year Plan was successful in its goal of increasing the industry of Russia. According to Stalin, the results were impeccable and the plan had no downsides. Stalin stated that because of the Five Year Plan, the Soviet Union had developed a tractor, automobile, machine-tool, chemical, modern agriculture, oil, and electricity industry. (Stalin) Russia was transformed into a more modern state and gained allies so that that the country was able to withstand Hitler’s invasions. (Stalin) Despite Stalin’s persistence, the Five Year Plan had several failures. Production increased, but it was at the expense of the workers.

Their quality of life decreased dramatically, often being beaten if late to work or sent to labor camps for mistakes. (Jones) In 1929, Stalin delivered a speech in which he stated the kulaks need be eliminated because they were responsible for the famine. Stalin sent them to Russian labor camps called gulags. (Stalin–Collectivization) The rapid production Stalin wanted led to scarcity of food. The health of peasants all over Russia declined quickly. (Jones)

The value of this speech is its ability to show how Stalin was attempting to convince the party that the Soviet Union was much more affective than the capitalist countries. He insists that the Five Year Plan has not caused distress for the people of the country, but uplifted poor peasants to a position of security. The document is limited because Stalin only reports on the successes of the Five Year Plan. He intentionally leaves out information about the areas in which the plan failed, in attempt to convince his Communist associates that it was a complete success.

Analysis
Although Stalin’s plan was successful in increasing several industries immensely, he did not reach his ultimate goal. Stalin originally ordered a 200% increase in iron production and 335% increase in electrical power, which were unrealistic goals for increases in industry.

What Impact Did Stalin's First Five Year Plan Have on the Economy and People of the Soviet Union?. (2016, May 29). Retrieved from https://studymoose.com/what-impact-did-stalins-first-five-year-plan-have-on-the-economy-and-people-of-the-soviet-union-essay 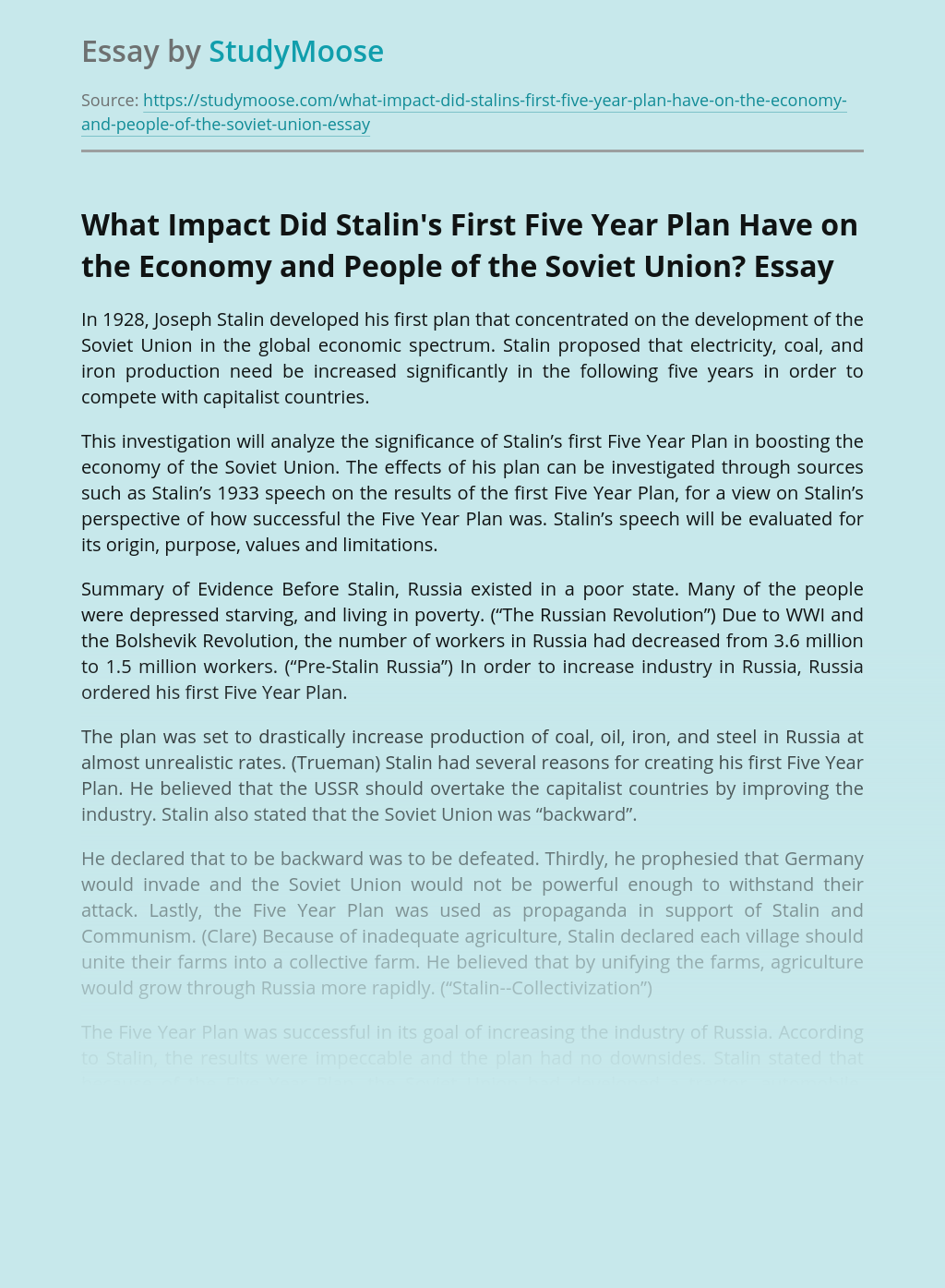