What if Julius Caesar was not assassinated

Julius Caesar was the emperor of the roman republic. As a powerful political and military figure, Caesar established the Roman Republic as one of the greatest civilization of the time. He was later assassinated as a plot by the senate, leaving the republic in chaos. Julius Caesar’s assassination was carried out his own senate. There was a conspiracy against him that involved his best friend, Marcus Junius Brutus. He was assassinated on Ides of March. His assassination came as fear raged in the senate that due to his dictatorship he could overthrow the senate into a tyranny.

This might not have taken place, but unfortunately for his assassins, things did not turn out the way they had expected. If Caesar has lived, the republic would not have gone into conflicts that led to the fall of the republic (Osgood, p. 18). This paper is a discussion on what would probably have happened if Caesar was not assassinated. If Caesar had not been assassinated the chaos that emanated in Rome after his death would not have happened.

The Liberator’s civil war would have been avoided has Caesar not been assassinated. The Roman Republic would not have become the Roman Empire.

The Roman Empire was born after the fall of the Roman Republic that followed the assassination of Caesar. Probably one day the republic would have ended, but definitely not as fast as it occurred with the death of Caesar (Parenti, p. 48). Julius Caesar’s assassination ended his good work as a military leader and respectable politician.

Had he not been assassinated he would have continued to gain power in Rome. Even before his assassination he has become so powerful and had begun to be a dictator. Though a dictator he was loved by the Romans.

It is as a result of this love and respect that people made destructive political decisions. They never had any problems with him as their leader. This leader has brought great prosperity to Rome. His military strength had brought in more power and land, which increased the strength and size of the empire. If he had lived, this powerful leader would have continued with his endeavors of greater success of Rome (Osgood, p. 28). Maybe if Caesar had not been killed, the leadership of the republic would have taken another direction after his natural death.

Before his death, he had named his grandnephew, Gaius Octavian, his only heir. If had lived longer Octavian would not have assumed power at the age of eighteen. He would have been leader when he gained the leadership or maybe someone else would have taken it. Though Octavian proved to be a strong politician, it was the assassination that brought him to power at such an early age. This power and the love from the society that adore his great uncle had a negative effect of the young Octavian (Stone, p. 123).

If Caesar had not been assassinated the senate would have retained the democratic society, as was its objective. Despite the fact that Caesar had become a dictator, the senate had managed to have in place a democratic society. If he had not been killed, it would have taken long for the republic to become a monarchy. This is what happened after his death and accession to power of his great nephew. The changing of the republic into a monarch would not have occurred fast because the people would still have confidence with the senate.

The lack of confidence with the senate was contributed by the assassination of Caesar. As a result it was very easy to change the government. Despite the fact that Caesar was a dictator his living would have seen the society remain a democratic one. Because of the people’s love for his successor, he became a greater dictator that his great uncle ever was. If he had survived, the power would not have gone into the hands of a young man who ended up getting corrupted by the power and love from the society (Zoch, p. 217). The death of Caesar was the cause of the fast end to the roman civilization.

Had he lived, this would probably never have occurred, or would have taken a longer time to take place. Probably if the emperor had survived, the republic would have remained a civilization for very many centuries. It was his assassination that started a domino effect that led to the fall of the civilization. The monarch that the people had so much wanted gave a lot of power to the emperors who followed and made them to abuse power. The senate would have persisted if Caesar was not assassinated (Osgood, p. 20). This would mean less power to the emperors.

Lack of another body that would regulate the power of the emperor, they ended up abusing the power and misusing what had taken a lot of time and strength to establish. It is this much powder that led to the fall of Rome. Romans were in need of a monarch led by Caesar, but due to his assassination, they received a monarch ruled by greedy emperors. The fall of Rome was quickened by the society that loved Caesar and wanted to hold on to him as their king (Stone, p. 193). Conclusion If Caesar was not assassinated, the Roman Republic would not have fallen so fast.

Probably the civilization would have survived for many centuries. Maybe there could never be anything like the Roman Empire that replaced the Roman Republic. The civilization ended with the domino effect that followed the assassination of Julius Caesar. This was because of the enormous contribution he had made to the republic and the chaos that followed his assassination. His military and political strength, he made the republic one of the greatest civilization of the time. With the violent way that he died, this marked the start of the end of the civilization.

What if Julius Caesar was not assassinated. (2016, Oct 17). Retrieved from http://studymoose.com/what-if-julius-caesar-was-not-assassinated-essay 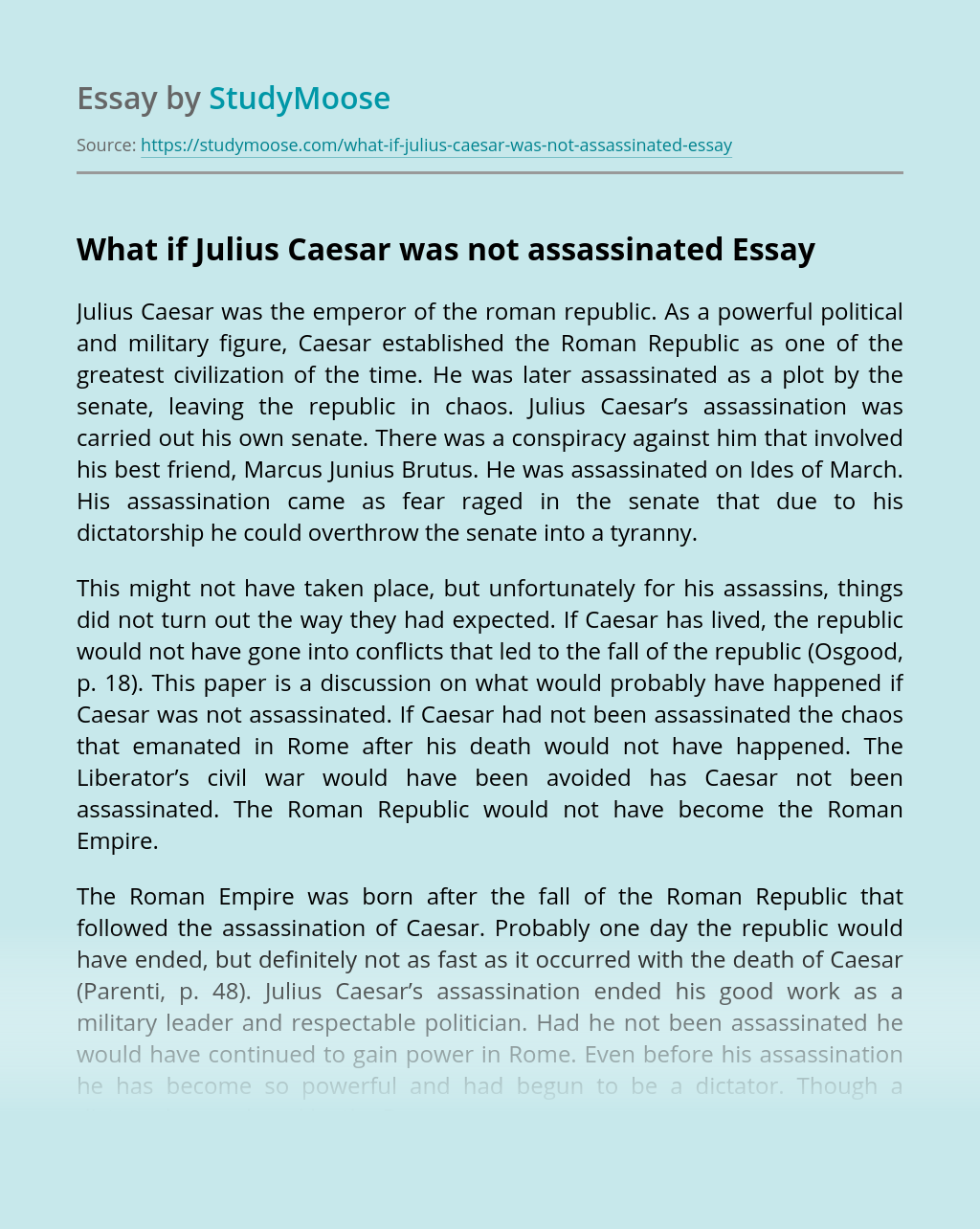 Don’t waste time
Get a verified writer to help you with What if Julius Caesar was not assassinated
Hire verified writer
$35.80 for a 2-page paper
Stay Safe, Stay Original