In the play, Julius Caesar by Shakespeare, the main character Brutus made several errors in judgment. His many aberrations led to his own death. The first and most basic fault by Brutus was allowing himself to become involved with the conspirators. The second was allowing Mark Antony to live and then permitting him to speak at Caesar’s funeral. The third fault by Brutus was his battle plan for the war at Philippi. The act of joining the conspirators in a plot to kill Julius Caesar was Brutus’ first blunder.

At first Brutus was unsure about the plan and needed more time to think about it. Cassius then misled Brutus into believing that more people would support the action of killing Caesar than leaving him alive. Cassius makes Brutus believe this by sending many fake letters through his window, signed with various names, in the days leading up to the assassination.

If Cassius wouldn’t have swayed Brutus into believing that Caesar needed to die the great tragedy of Julius Caesar would have never occurred.

Brutus should have never listened to Caesar.Therefore, leading to Brutus’ first mistake. Furthermore, the second mistake of Brutus was first, allowing Mark Antony to live and second, giving him permission to speak at Caesar’s funeral. When the conspirators first brought up the idea to kill Mark Antony along with Caesar, Brutus quickly rejected this offer. Brutus stated that “…for Antony is but a limb of Caesar” (Act 2, Scene 1). Brutus figured that once Caesar was killed Antony was sure to kill himself because without Caesar he was nothing.

Leading to Brutus’ first mistake regarding Mark Antony, allowing him to live when he as well could have been assassinated. The second mistake of Brutus involving Mark Antony was allowing him to speak at Caesar’s funeral. Although, Cassius warned Brutus about allowing Antony to speak, he still permitted him anyway.

Obviously, Brutus misjudged the effect that Antony would have on the crowd. Along with the original bad decision of allowing Antony to speak, Brutus then goes and decides to leave when he is finished delivering his own speech at the funeral of Caesar. Without Brutus there Antony was free to speak to the crowd without any challenge or interruption. During Antony’s speech he inspires the crowd to go against the conspirators. Brutus manufactured two brutal mistakes regarding Mark Antony. Lastly, a mistake which lead to his own death was his battle plans for the war at Philippi. Although, Cassius and Brutus disagreed on battle plans, Brutus ended up persuading Cassius to follow his battle plan which stated that they should march to meet the enemy at Philippi rather than waiting to be found.

With the decision to march they gave up the advantage of the hills, and were defeated in Philippi by Antony and Octavius’ armies. When Titanus is sent to check on the battle proceedings, Pindarus mistakenly reports him captured by the enemy. Cassius then asks Pindarus to kill him. Later, Brutus is convinced by Caesar’s ghost that he must die as well. He runs onto a sword held by Strato and ends his life. The mistake of marching forth at the war of Philippi lead to confusion and defeat. Thus, another mistake made by Brutus.

In conclusion, throughout the play Brutus made several hamartias. With the first hamartia being to join the conspirators and the last deciding to march onto Antony and Ocatvius’ army, Brutus was an extremely flawed character with poor judgment. Being naive lead him to join the conspirator’s plan and possessing faulty judgment with Antony lead to the Plebeians believing that Caesar was killed for no reason. Even though Brutus made several mistakes, he was as Antony said, the only conspirator whose intentions were honorable and unselfish. 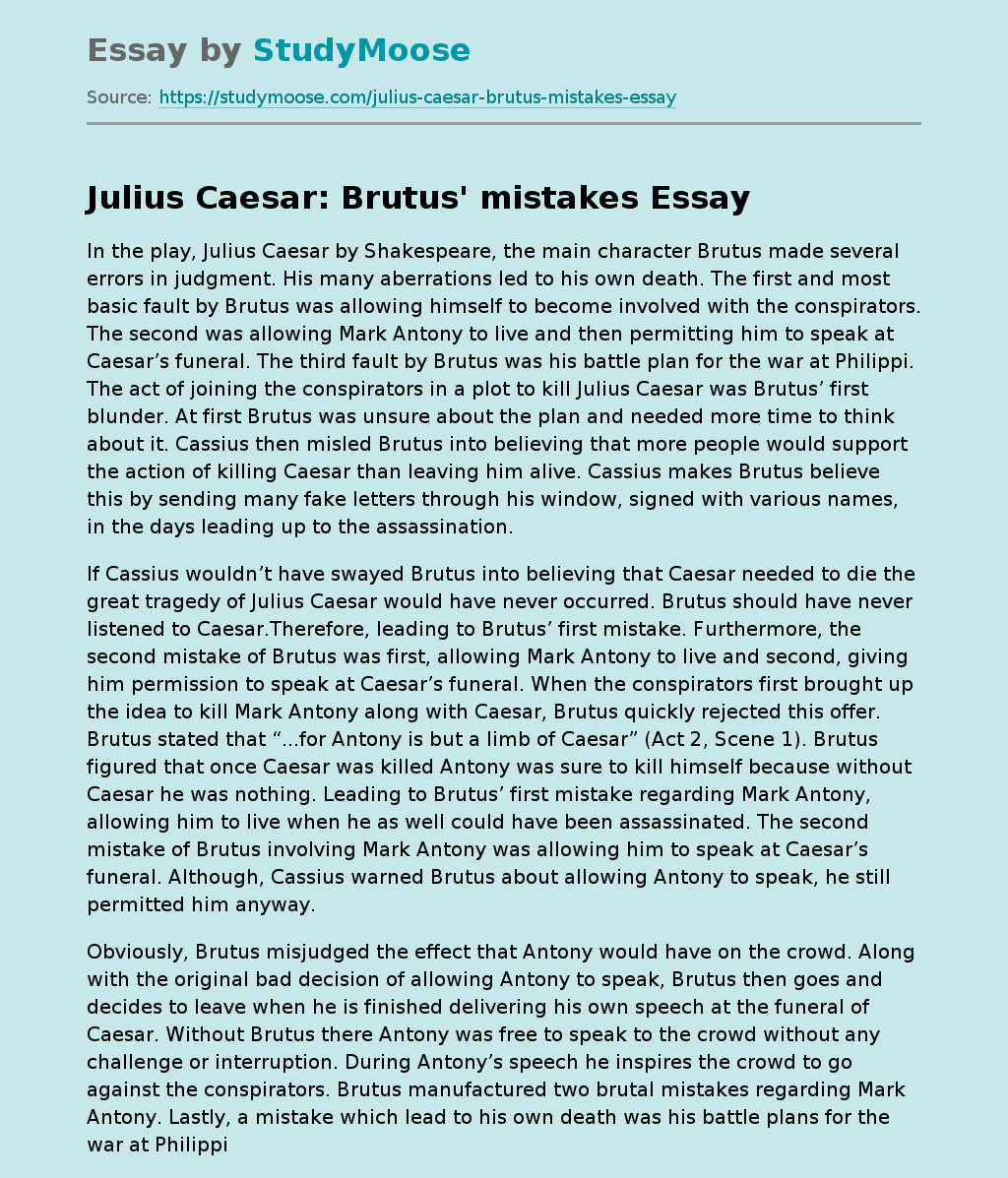