What Does The Word Culture Mean?

Have you ever though what does the word “culture” means? Well, throughout life people refer to this word as art, beliefs, behavior, ideas or activities relating to literature, art, and music of a particular society or group of people. However, that is only the simply definition that appears on the dictionary. Culture involves other important subjects that describe deeply this word, issues such as, family, language, identity, stereotyping, raising, expectations, economic situation and so on. Therefore, family is the place in which society begins, but in many cases families are part of different cultures, and the ones that are affected by this situation are the kids.

Don't use plagiarized sources. Get your custom essay on
“ What Does The Word Culture Mean? ”
Get custom paper
NEW! smart matching with writer

These children are the ones who have to fight day by day against these two different worlds. To illustrate this, I choose some stories such as, “the Good Daughter,” by Caroline Hwang, “Living in Two Worlds,” by Marcus Mabry and “Almost a Woman,” by Esmeralda Santiago. Each of these stories reveals the conflicts children have to confront in the adjustment in a foreign culture and the roles that family and cultural identity play in accentuating these dilemmas.

This essay will show how children have to face the pressures and demands of living in two different cultures.

First of all, one important aspect of the experiences of these children is to define their identity. Therefore, for children that belongs to two cultures is not easy to find their identity, especially if they come from immigrant families. In the story “The Good Daughter,” Caroline Hwang, an American-born Korean, describes how she loses her identity.

Throughout all her life she though that she was American as Korean, but she did not imagine that a visit to the dry cleaner was going to make her realize that she was not as Korean as she though. According to “The Good Daughter,” The woman behind the counter of the dry cleaner tells Caroline: “You do not how to speak your name,” (15).

This incident surprised her; at that moment she discovers that all her life she had mispronounced her name. Besides that, she feels betrayed by her parents, since they never tried to correct her and for that reason, she became unsatisfied with her cultural identity. Caroline says, “I identify with Americans, but Americans do not identify with me,” (16). This shows how difficult it is for her to be a part of American society and how she is repelled from the only culture that she knows. For instance, the parent-child relationships it is very important in the development of self-esteem in children. On the other hand, Esmeralda Santiago form the story “Almost a Woman,” was an immigrant too, who had also problems with her identity. Esmeralda was a young Puerto Rican girl with a big confusion in her mind. Since she arrived to the United Stated, her mother told her that even though she was in America she had to behave like a Puerto Rican girl and not like Americans. Regardless of that, her mother wanted Esmeralda to be American in terms of language, education and how to act among Americans, but she was not allowed to act like American girls of her age. She discovers that her life was very different from American adolescents.

As a result of that, she became confused about her identity, she did not know what makes her American and what Puerto Rican. As an illustration of this, she says, “Was I Americanized if I preferred pizza to pastelillos? Was I Puerto Rican if my skirts covered my knees? If I cut a picture of Paul Anka from a magazine and tacked to the wall, was I less Puerto Rican than when I cut out pictures of Gilberto Monroig? Who could tell me?” (Santiago 25). There is a clear example of Esmeraldas confusion and her seek to find her identity. She did not know where Puerto Rican ended, and Americanized began. Since she arrived to the United States she became part of a new world in which she had to live, but besides that she is still part of her family world, in which her mother does not listen to her when she refers to her needs in the adjustment to the new culture. According to the stories “The Good Daughter” and “Almost a Woman,” is obvious, that parent relations are important because they impact the child identity so strong. This means that parents need to be the tool that a child needs to find their identity.

Secondly, poverty is unfortunate but is the true reality that many individuals have to face. Sometimes people do not discover that they are poor until they travel between those two worlds or cultures. In the yarn “Living in Two Words,” Marcus Mabry has two different lives. He discusses his life in Stanford University, where he resides in a nice two bedroom apartment on campus and on which he have had a sheltered life with dinner parties, and comfort. However, during winter break he has to return home and hit with the reality. The transition from University life to his poor home seems to create a great emotional confusion in his life. Seeing his family situation Marcus feels helpless, embarrassed and even guilty sometimes, he says, “More than my sense of guilt, my sense of helpless increases each time I returned home,” (Mabry 153). Therefore, Marcus feels a terrible ache knowing that his family is suffering all the time and that his people are being killed by poverty.

In addition, scarcity continue to let our children live in unsatisfactory conditions. As an illustration of this, in the story “Almost a Woman,” Esmeralda was not traveling between the universes of poverty and affluence like Marcus Mabry, but she was an immigrant from Puerto Rico who had to face different cultures too. Throughout all her life she thought was not poor until she came to the United States. For Esmeralda being a part of the American culture was becoming poor. One day her mother told Esmeralda to accompany her to the DEPARTMENT OF PUBLIC WELFARE, because she had lost her job and she was not able to maintain her children. For instance, her mother tells her to translate to the social worker, and she says, “That the factory closed.

They moved to another state. I don’t have any money for rent or food,” (Santiago 19). A situation like this demonstrate that is not easy for immigrants to improve their living conditions because most of the time they do not have a stable job. As a consequence of that, Esmeralda wanted to go back to Puerto Rico where she knew who she was, where she did not know that she was poor, where she did not know her parents did not love each other, and where she did not know what it was to lose a father. In other words becoming poor in a culture that you are a foreign is hardest that becoming poor in your own culture, this means that although you miss many thing you still have more common things that identify with you.

Last, language is one of the most important facts that influence in the adjustment of cultures. As humans we acquire language for very direct, meaningful purposes. In the story “Almost a Woman” Esmeralda Santiago has to deal with the barriers of a language different that hers. However, English was difficult to learn it was not a barrier for her; it was a challenge to succeed in the new culture. As an example of that, Esmeralda put all her effort in learning English by reading books with illustrations, speaking English at home and practicing with her family. In addition to that, their English grow slowly until became a bone with her brothers and sisters, but at the same time it separates them from their mother and grandmother. This kind of situation where children mostly speak English can very often alienate them from their parents or grandparents, and eventually weaken the family bonds.

What Does The Word Culture Mean?. (2016, Jun 21). Retrieved from https://studymoose.com/what-does-the-word-culture-mean-essay 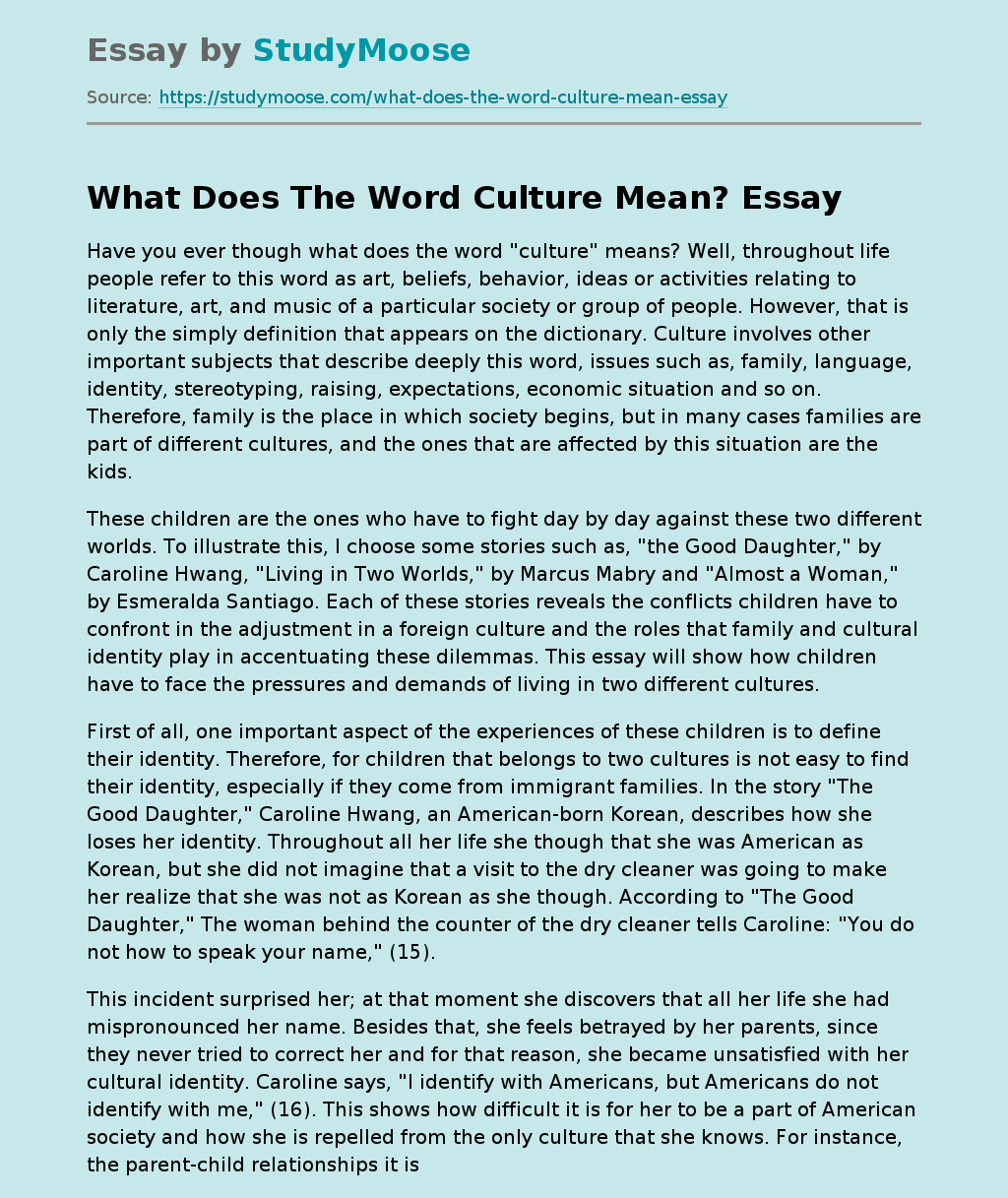