Water is one of the most important issue that affects

Water is one of the most important issue that affects relations between the nations. The threat of water scarcity becomes severe with population growth, industrialization, urbanization and environmental degradation. Only 3 % of the total water available on the planet is fresh water, out of which 2 % percent is frozen in glaciers and ice caps. Only 1 % fresh water present as lakes, aquifers, ponds and rivers is available for human consumption. In the last 100 years the world population tripled and the use of water grew six times.

Don't use plagiarized sources. Get your custom essay on
“ Water is one of the most important issue that affects ”
Get custom paper
NEW! smart matching with writer

On comparing the worldwide water availability, we understand that bulk of the Indian subcontinent is facing water “stress” to “scarcity” with extreme “scarcity: in Pakistan with Nepal and Bhutan as the exceptions. As per an UN report, South-Asia in 1951with abundant water, in the last 60 years has reached a state of being water stressed and by 2050 is likely to experience a state of “water scarcity?. South-Asia is heading for an era of “hydrological warfare” in which water resources become vital National Security assets to be contested and controlled.

Water doesn’t have an economic substitute and consequently is increasingly being considered an important strategic target during conflicts.

Nepal and China, the GBM basin is the 3rd largest hydrological system in the world after the Congo and Amazon rivers. “The worldwide paradigm shift in river basin management has not affected policymakers in South Asia.

Hydro-diplomacy in the GBM basin is still based on reductionist engineering and looks at marginal economic benefits, without showing any concern for the long-run implications for livelihoods and ecosystem. The governments in the river basin are already facing the challenge of extreme poverty, despite the countries experiencing high levels of precipitation” (Bandyopadhyay, 2009). Neither has there been a proper understanding on selecting the right type of institutional mechanism on regional cooperation, nor a detailed all-inclusive cost-benefits evaluation carried out on the huge potential of the basin. A holistic framework based on IWRM for the basin is imperative, the same concept implemented successfully will serve as a vital framework to be applied to other river basins in South Asia.

Increasing water demand in South Asia will lead to its acute scarcity and water will become a resource of contention and conflict. The paper seeks to study and analyze the implementation of IWRM in the GBM basin that is shared by China, Nepal, Bhutan, India and Bangladesh. The various dimensions of water sharing in South-Asia, various issues existing in GBM basin and identifying the untapped benefits, understanding the concept of integrated management of the basins and its implementation in GBM basin are essential to manage hydro-political conflicts and sharing benefits. It is imperative to coordinate all water related development plans and aspirations of riparian nations through effective trans-boundary cooperation by promoting implementation of the IWRM concept in the GBM basin. In this context, the rationale of this study lies in its attempt to highlight the importance of implementing IWRM in the context of GBM basin to mitigate hydro-political conflicts thus promoting shared prosperity & development in South Asia.

South Asia is gradually heading towards acute water scarcity exacerbated by growing population, industrialization, mismanagement, climate change and lack of cooperation. This region hosts major trans-boundary water courses with serious water disputes. The initiatives to cooperate in development and management of water resources have shown little promise. The unilateral behavior of co-riparians, asymmetric power relations among nations, absence of framework agreements, nationalistic sentiments and lack of regional mechanism to share waters are among the main reasons for water disputes. Past bilateral approaches show that the absence of multilateral integrated management poses difficulties for effective GBM basin water management. A multilateral management approach with a joint river basin institution and mutually agreed treaty with dispute resolution mechanisms is vital. Internationally accepted trans-boundary IWRM principles need to be adhered. Therefore, this research attempt to propose implementing of IWRM in the context of GBM basin to mitigate hydro-political conflict thus promoting shared prosperity & development and also to highlight the applicability of the same concept implemented successfully to other river basins in South Asia.

Water is one of the most important issue that affects. (2019, Nov 27). Retrieved from https://studymoose.com/water-is-one-of-the-most-important-issue-that-affects-example-essay 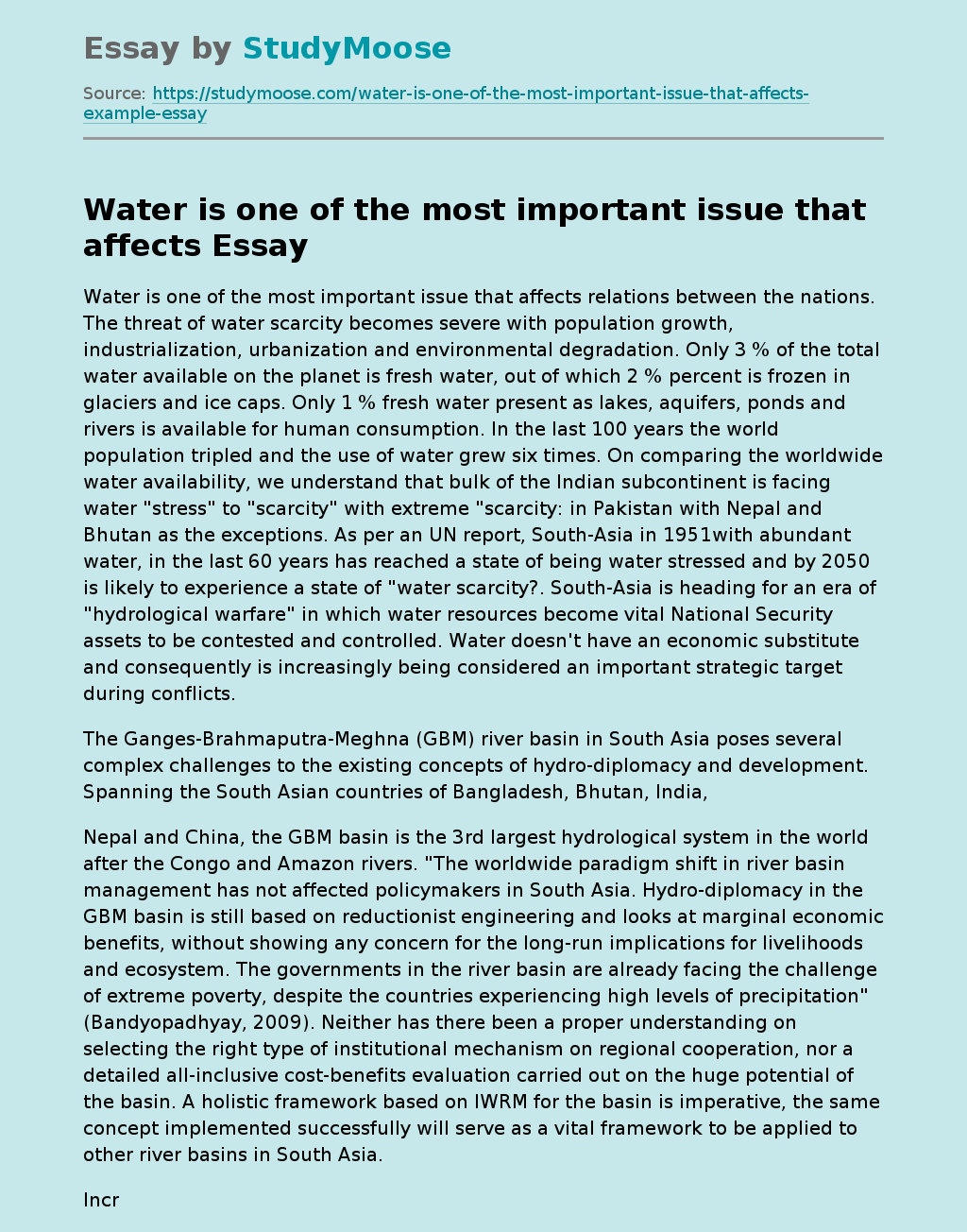