Was Reconstruction A Success or a Failure?

Even though there were many plus sides to the civil war, for example, the abolishment of slavery, secession was refuted, and the supremacy of national government. There was still one downside which was the Reconstruction of the country. The main issue was how they were going to figure out what to do with all the freed slaves and how to protect their rights. Some ways reconstruction was a failure is the establishment of the KKK/racism, the political rights of the freedmen, and misleading statistics of the election.

Don't use plagiarized sources. Get your custom essay on
“ Was Reconstruction A Success or a Failure? ”
Get custom paper
NEW! smart matching with writer

There were many more reasons why reconstruction was a failure but these were the most impactful. Like all things in life, reconstruction had to come to an end, the resulting outcome was both a success and a failure. The Ku Klux Klan was a group of white males that would rally their views and opinions about African Americans. They were completely against the idea of them being freedmen. Congress’ reconstruction efforts to have equal rights for freedom failed because the KKK would intervene in the wrong ways.

In Document 2 General Thomas discusses the KKK. Their main purpose was to get rid of African Americans so that the whites could gain more power. They even killed any who supported the African Americans, even if they were white. “With the close of the last and the beginning of the new year the State of Tennessee was disturbed by the strange operations of a mysterious organization known as the ‘Ku Klux Klan’” General George Thomas acknowledged what the KKK was trying to do.

They were creating obstacles for the government while they were trying to take care of the freedmen. Another way the KKK was an impactful part of the failure of Reconstruction was shown in an editorial in Atlanta Newspaper when the editor of the section tries to get white males to help out in getting rid of the African Americans’ rights. In document 4, the Atlanta news uses this editorial to call for the formation of “White Leagues” to the reconstruction. “Let there be ‘White Leagues’ formed in every town, village, and hamlet of the south, and let us organize for the great struggles which seem inevitable.

We have submitted long enough to indignities, and it is time to meet brute-force with brute-force.” In the document, the speaker states his views on the African Americans in the south. He wants the Northerners to go to the South and Organize a way to convince freedmen to stop voting. Also, they tried to stop them from taking part in politics. The political right of the freedmen was very splotchy. They had limited rights and then had restrictions on top of those rights, just limiting them even more. Their rights were all just affected by the fact they were African Americans who were former slaves, nothing else. In document 1 Congressman Boyer is talking about how freedmen shouldn’t be allowed to vote. He claims that African Americans are not mentally capable as whites are. “But it is not the complexion of the negro that degrades him… [the Negro is] a race by nature inferior in mental caliber… the negros are not the equals of white Americans” He automatically puts a label onto the African Americans saying that they are not equal to white Americans.

Since they’re a different complexion since they were born and raised different they’re considered to be not equal. The splotchy political rights of African American was shown in document 6. In the document, Dr. W. E. B. DuBois tells us about how the African Americans who wanted to work weren’t allowed to do anything involved in politics. In order to survive during that time, they needed to give up their political powers. “ But the decisive influence was the systematic and overwhelming economic pressure. Negroes who wanted work must not dabble in politics. Negroes who wanted to increase their income must not agitate the Negro problem.” They were trying to stop the African Americans from having any sort of political power or from taking part in any political events. They were given working contracts from former slaves owners but they were told they couldn’t vote in order to earn.

The last most major reason why reconstruction was a failure was the election that ended reconstruction. In document 8, we’re given a map that has the statistics of the election. In the key clearly shows that Samuel J Tilden won in both the popular vote and the Uncontested Electoral Vote. So it wasn’t possible for Hayes to win unless there were other deals made. “The disputed presidential election of 1876 set the stage for the final stage of reconstruction–the removal of all federal troops from the last three “unreconstructed” Southern states: Louisiana, South Carolina, and Florida.” Hayes was guaranteed to win the election as long as he removed all union troops from the last 3 unreconstructed states. Removing these troops would allow the freedmen to be open to more injustice. The white would be able to treat the freedmen poorly and nothing could be done about it by the union since their troops were no longer stationed there.

Another way this election assisted the failure of the reconstruction was because it brought reconstruction to an end altogether. Since the freedmen were open to all injustice, the efforts by the Northern Republicans in Congress to protect freedmen and their rights were abandoned. There was nothing left to be done. The freedmen were on their own couldn’t be helped. Their freedom, rights, and political rights were all left unsecured. In general, reconstruction was a win and a loss. It was a win since there were a few things that went right like the abolishment of slavery and it was a loss because it wasn’t well thought out enough. There was way too much grey area in order to bring a large amount of change. Whatever reconstruction did and didn’t do set the stage for America we live in today.

Was Reconstruction A Success or a Failure?. (2020, Sep 06). Retrieved from http://studymoose.com/was-reconstruction-a-success-or-a-failure-essay 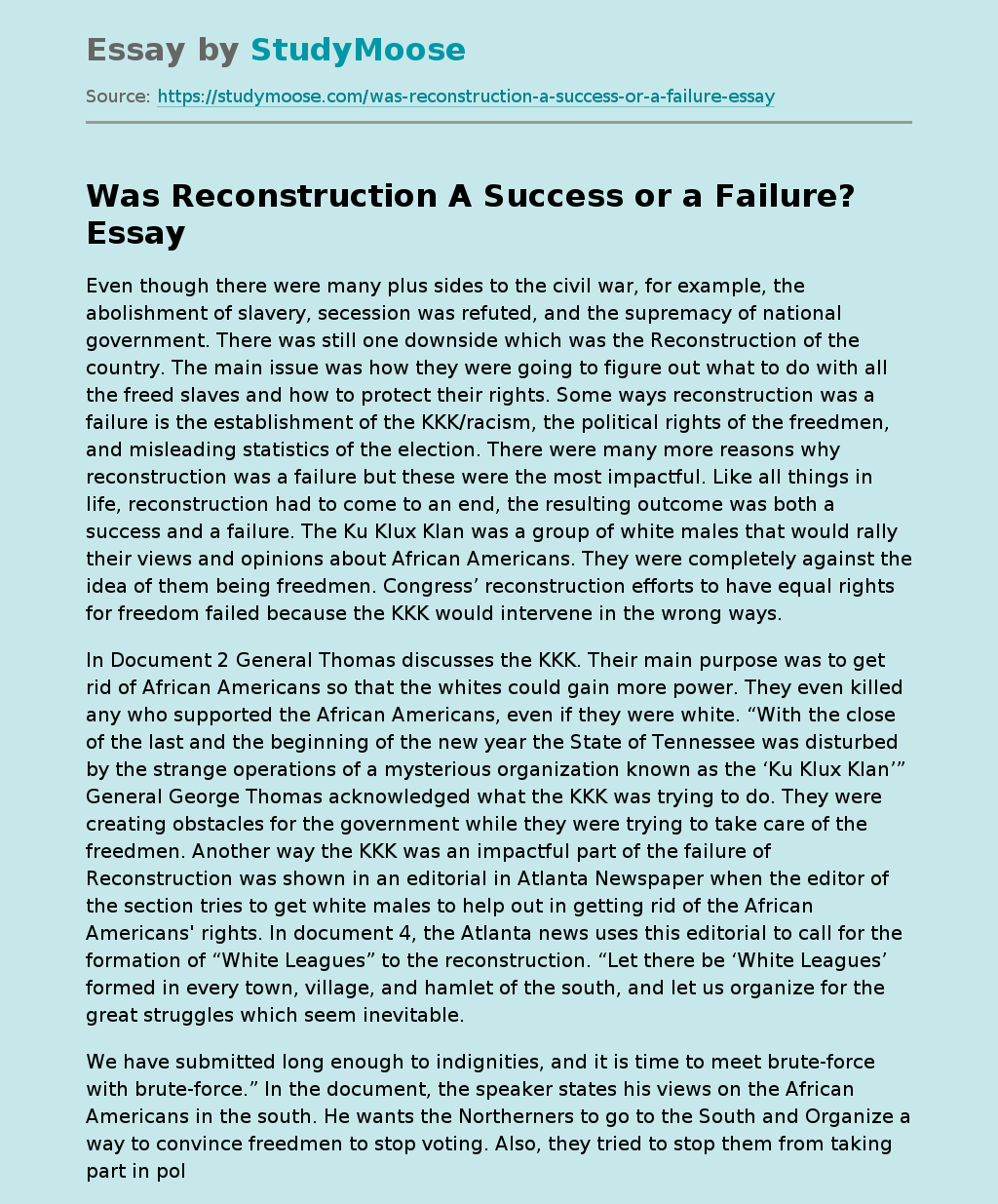