Walton and Victor Characters in a Novel Frankenstein

In the beginning of chapter five, Shelly starts to use setting to create a chilling atmosphere of horror. She writes of it taking place on a dreary night, this builds a sense that it is dark with a creaking noises of wind, thunder and rain pattering ‘dismally on the pain’. In addition to these the book describes the ‘half extinguished light’ and the moon as a ‘dim and yellow light’ these words suggest darkness with only a small amount of light about, emphasising the feeling of gloom and despair.

Don't use plagiarized sources. Get your custom essay on
“ Walton and Victor Characters in a Novel Frankenstein ”
Get custom paper
NEW! smart matching with writer

Shelley then goes on to describe the character’s appearance writing of his’ dull yellow eyes’ and ‘his yellow skin’ this gives the reader an increasing idea that the monster is diseased or unnatural and therefore would appear more frightening to the reader, and also suggesting the creature has all the characteristics of a devil describing it as ‘the demoniacal corpse’. Shelley also tries to create a feeling of horror through the imagery of Frankenstein’s dream or more, nightmare which Victor is ‘started from’ ‘with horror’ apparently ‘disturbed by the wildest dreams’.

Mary Shelley writes of Victor seeing ‘the corpse’ of his ‘dead mother’ scaring Frankenstein in order to scare the reader also. The book, on the other hand, shows more than just a horror story with many different themes being linked into it. In chapter five it particularly shows both the physical and psychological effect on Victor. Physically, Frankenstein tells how he has ‘deprived’ himself ‘of rest and health’ trying to create the monster.

This gives the reader a better impression of how obsessed he has become and that nothing else was of importance while he was creating the monster.

It also shows how he takes a sudden hatred to the creature and realises that he has gone against nature and what he has done is wrong, describing the ‘breathless horror and disgust’ filling his heart. This paragraph is not simply for clear cut horror but also examines the sudden change in Frankenstein when the creature is born. As in chapter five the rest of the book juggles both the horror aspect and the deeper themes. Mary Shelley uses horror in the rest of the book in a similar way.

There are many references to the creature as ‘the demon’ or the ‘devil’ this suggests Shelly has constructed it so that the audience perceives it as an evil being. The monster is also described as ‘the shape’ suggesting the unknown which would frighten people as it could be anything and be a great danger. The book also shows how Frankenstein reacts and feels at certain points when he is scared ‘Trembled with rage’ or ‘I felt a faintness seize me’. Shelley also uses setting but in a different way.

Instead of being dark and dreary, the writer uses ‘wild and mysterious regions’ because they are dangerous areas and are totally isolated giving a sense of loneliness and helplessness. One of the main themes within the book is the dangers of obsession and how Captain Walton follows the same course to obsession. Both men are obsessed by one thing, Walton writing in his letter ‘I dedicated myself to this great enterprise’ and Frankenstein admitting that he had ‘worked hard for nearly two years, for this sole purpose’.

At many places in the book it mentions of how because of obsession Victor compromises his physical and psychological state and the relationships and lives of his family. As written in chapter five he ‘deprived’ himself ‘of rest and health’ and similar to this, Walton writes in his letter how he also has ‘voluntarily endured cold, famine, thirst and want of sleep’. Frankenstein also suffers from obsession as he pushes people away from him, especially his love Elizabeth, and again Walton is indifferent as he writes to a beloved one a long way away, which suggests he has been away from her a long time.

The two characters are both very alike wanting to be remembered in history with Walton saying ‘I preferred glory to every enticement that wealth placed in my path’. Because of these similarities Walton is then able to see his future self through Victor, and therefore sees this as a warning, eventually turning back. This also links to the theme of being a warning, that it may go wrong as when Victor talks to the Captain saying, ‘I ardently hope that the gratification of your wishes may not be a serpent to sting you’, hoping that for Walton it does not turn bad as it did for himself.

He also tries to warn him with, ‘I imagine that you may deduce an apt moral from my tale, one that may direct you if you succeed in your undertaking and console you in case of failure’ Victor is trying to warn him that even if you do what you have set out to do, you may not get what you want, that although he achieved in making the creature, he did not act as he should have done and warns Victor to do the correct thing if he succeeds. As well as this there is another warning Shelley covers in this book between Victor and Walton about challenging nature.

Walton and Victor Characters in a Novel Frankenstein. (2020, Jun 01). Retrieved from http://studymoose.com/walton-and-victor-characters-in-a-novel-frankenstein-essay 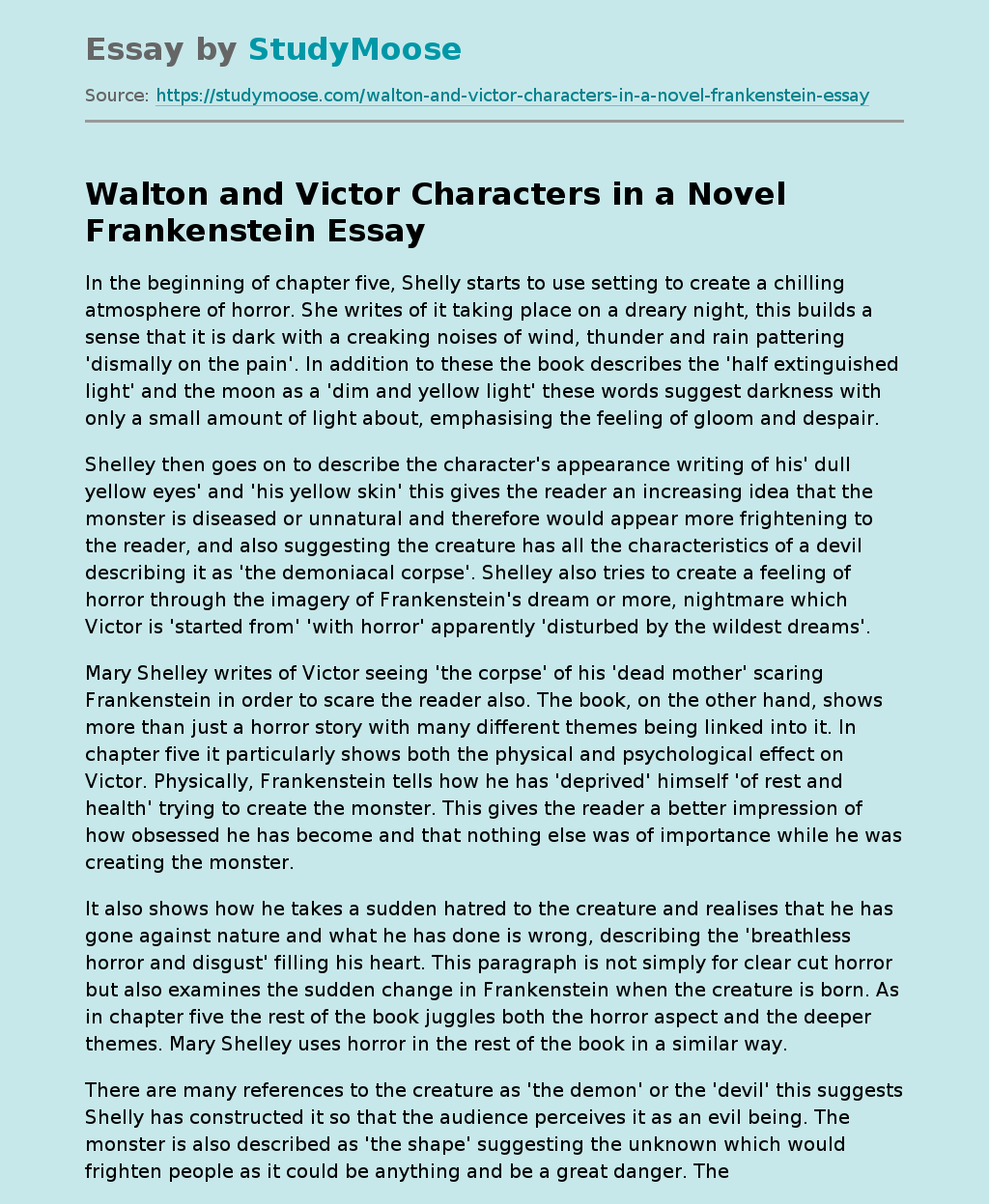