In the poem “America”, Walt Whitman views America as the center of all countries and the home to many people who have different qualities but equal. He uses words like perennial, mother, capable, adamant and equal to contribute to his tone of patriotism and pride for his country. The word mother is used to depict that America is caring to all her citizens, or sons and daughters. America is like the mother who cared for him as a child. The word equal shows that America is a place where everyone is equivalent to each other and there are no classes dividing us, and Whitman saw America as a place where people were seem as a family.

Don't use plagiarized sources. Get your custom essay on
“ Walt Whitman and Allen Ginsberg ”
Get custom paper
NEW! smart matching with writer

The word capable portrays that all people of America are able to accomplish goals through the challenges they encounter. Perennial means to last or exist for a long time, Whitman may have used this word to illustrate that America will forever be on this earth and will always be the mother to her son and daughters.

Adamant is used to say that America will stay grounded in its beliefs that everyone is equal and will not be persuaded by any other country. The tone of “A Supermarket in California” by Allen Ginsberg, seems to be disappointment because of the mainstream culture in America. Ginsberg is writing about his experiences and visions or thoughts of America and there is a gradual shift in his attitude towards American culture. Ginsburg beings the poem with excitement towards the Supermarket, with wives, husbands and children all shopping in the aisles.

The supermarket is a symbol of traditional American values and the consumerist culture American are obsessed with. The words childless and lonely are used to show that Whitman is the only person in the supermarket without a child. This could mean that America is not what Whitman believed it used to be, American has changed and does not carry to same ideals Whitman once believed it did. In the beginning of the poem, Ginsberg explains that he has a headache walking down the street, the word headache could depict his frustration for the change of American culture towards consumerism. L

ost America of love is stated to illustrate that the 20th century America has lost its “love” compared to the 19th century America. 19th century American was more about compassion and not about the possessions Americans had. America was a country of love, democracy, kindness and compassion in the eyes of Walt Whitman. Ginsberg’s poem is trying to show that all these characteristics of American citizens have been lost in today’s America. Whitman and Ginsberg show two different American societies in different time periods. In Ginsberg’s time period, America has experienced the Civil War, Industrial Revolution and a new era of technological advances. Through these events America has lost the compassion and love that was shown in Whitman’s poetry. Ginsberg broke away for Whitman to show that America is the same and it doesn’t stand for the same values it once did in the past. Family traditions and values have changed and so has the American society. 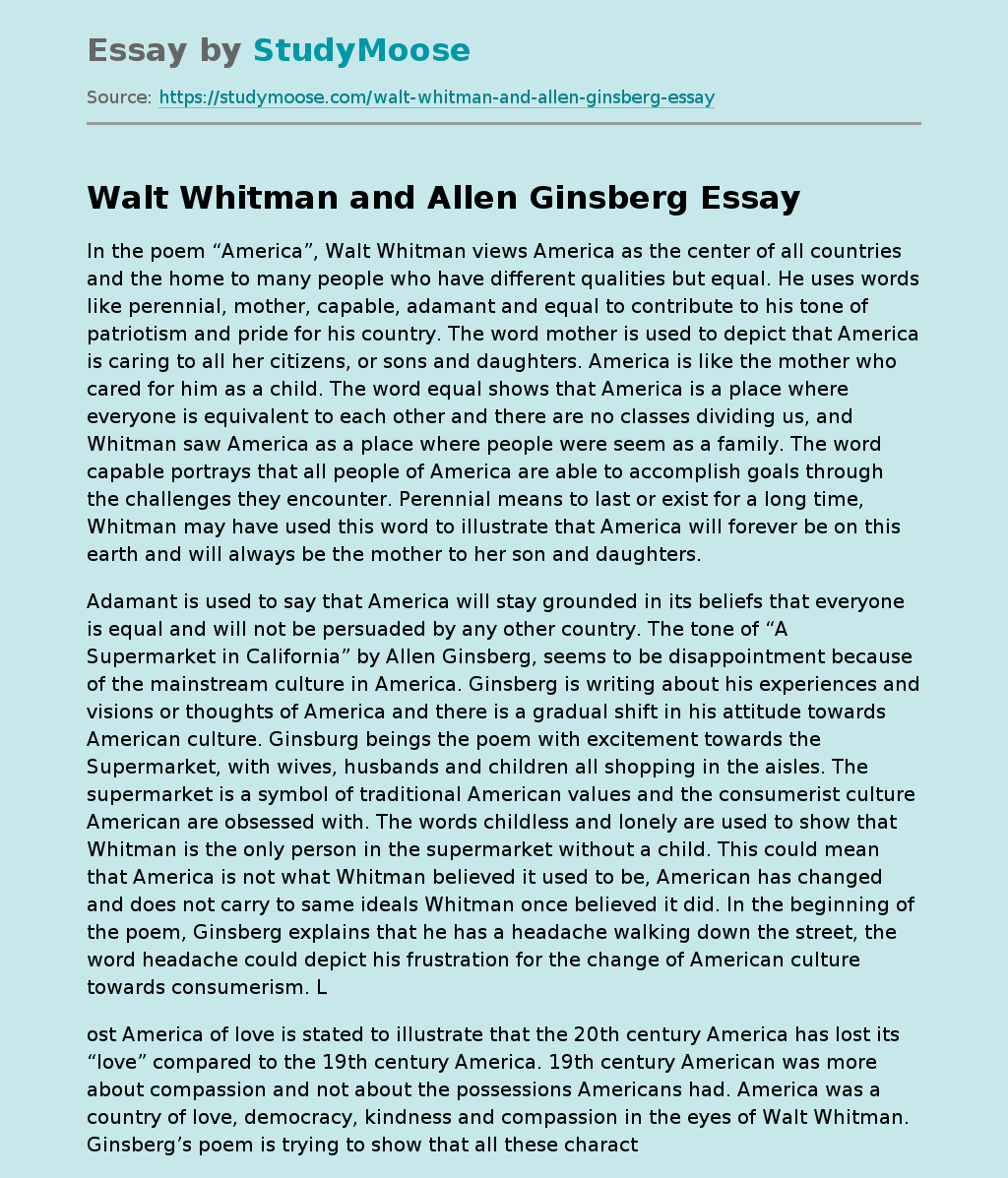