The poem "America" by Allen Ginsberg

Allen Ginsberg has been credited “the single greatest influence on the American poetic voice since Whitman”, by Bob Dylan himself, and Ginsberg would most probably agree, being his own biggest fan. “America” is typical of Allen Ginsberg in that it’s increadibly long. Allen Ginsbergs poems are characteristically long winded and conversational- or monologual- quite unlike the usual style of a poem. He uses peoples full names, and often dedicates poems to specific people. He writes exactly what he sees- which are often everyday ordinary things- such as going to chinatown- but he presents them with an interesting perspective- often political, cynical or sexual- which is why people either love or hate Allen Ginsberg’s work.

Don't use plagiarized sources. Get your custom essay on
“ The poem “America” by Allen Ginsberg ”
Get custom paper
NEW! smart matching with writer

His pieces are often like cleverly constructed diary entries with a slightly poetic ring to them, rather than poems with a slight conversational tone.

The tone in America evolves quite radically from cocky to concerned, and the language is informal (full of elision), nondescriminating towards swearing- selectively descriptive – the only really metaphorical line I could find was “in the light of 500 suns”, and blatantly honest (I go to chinatown).

Repitition is really the only true poetic device of this poem, and gives the reader the impression that each line is separate from the others, as if the poem itself, is simply a collection of one liners Ginsberg has spouted or perhaps heard at one time or another, and glued together with a common message.

In the first two lines, America and the world have obviously just been through world war 2, and are in the midst of the cold war against Russia.

Allen Ginsberg basically communicates his doubt that america’s is the only and right way.

The poem is basically divided into three tonal and attitude verses. In the first, Allen Ginsberg appears quite overly infantile and immature in his response to America’s actions, as if he isn’t a part of them. He speaks as if America is his parent- or a separate entity to himself, and is satisfied winging to it. He acknowledges the large and international issues present, for example the atom bomb threats and “human war”, but refuses to budge from a narcassistic viewpoint, talking of material desires, alcohol, sex, of that I want I want attitude. He also refers to higher authorities to validate his opinion- (for example his psychoanalyst, and several others in the full version.)

In the second verse “it occurs to me that I am america” he adopts a far more involved attitude. He acknowledges that his every action effects other’s lives in some way or another. In saying that he IS america, allen ginsberg is taking his complete happy go lucky attitude and disreguard for his actions as a part of america to the opposite extreme, and instead taking on all the stresses and responsibilities under his belt as if he is america. Although whilst doing this, he still holds a somewhat cynical approach.

In the last verse, he takes on a responsible yet not soley responsible role in the runnings of america- offering concerned interest and advice- a far more adult perspective- and finally in the last two lines decides to take action for what he believes in.

Overall I found this a provocative, entertaining and satisfying poem to read. Although allen ginsberg definatly has a habit for writing odd overly long inside-joke style confusing poems, I thought “america” was particularly to the point and relevant, coming from an american’s pen.

The poem "America" by Allen Ginsberg. (2016, Jun 22). Retrieved from https://studymoose.com/the-poem-america-by-allen-ginsberg-essay 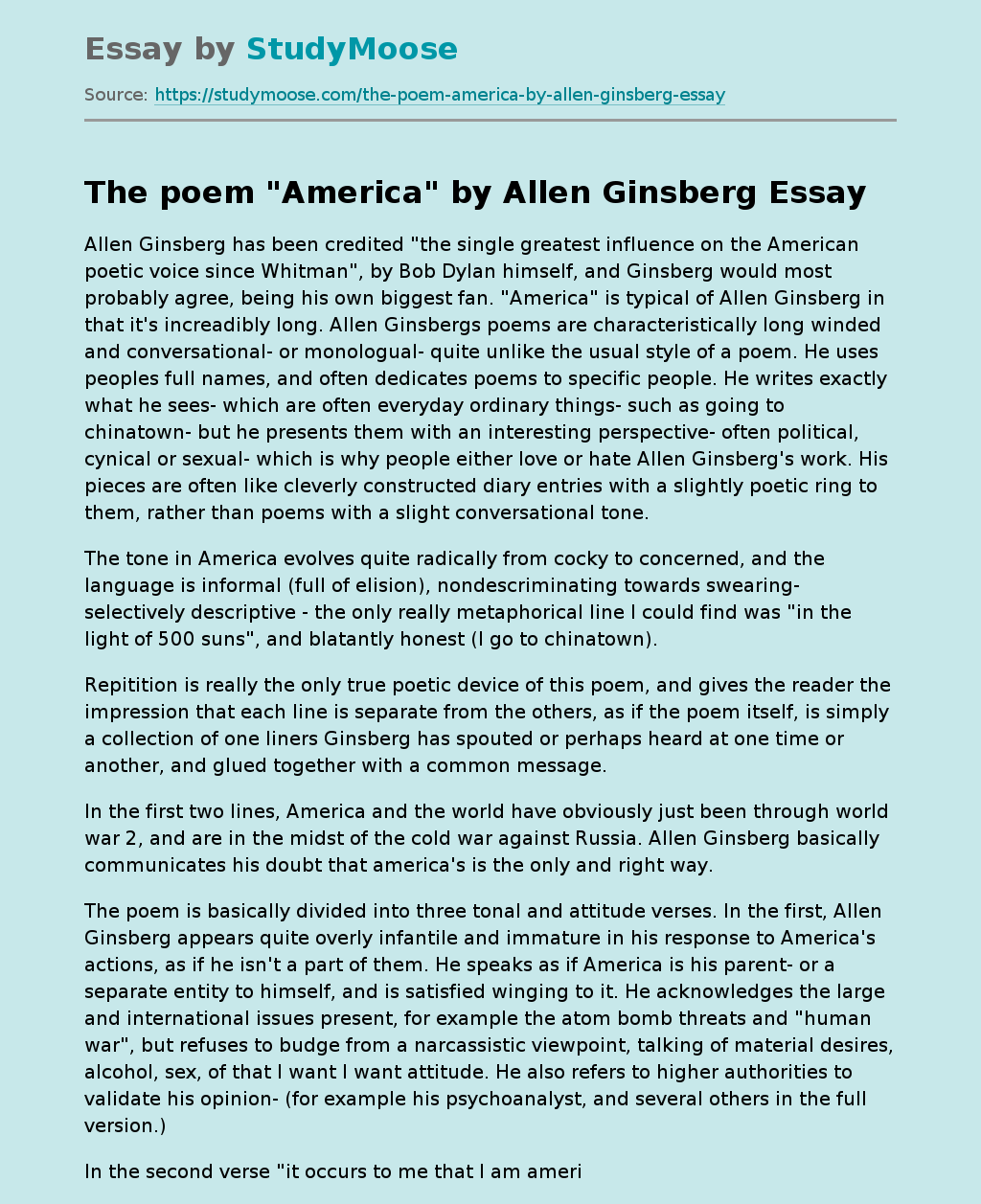