Analysis of "I Sit and Look Out" by Walt Whitman

I sit and look out” by Walt Whitman echoes all miseries and atrocities of life that rose to the surface in the wake of capitalism. 19th century witnessed a sea change in the lives of people as rat race for materialistic possession became more prominent and principles were relegated, concerns and emotions were sidelined from inside of human beings.

The poet pen pictures such a sad tale of human life by attempting to pose as onlooker who watches everything but does nothing to alter situations.

Turn in your highest-quality paper
Get a qualified writer to help you with
“ Analysis of “I Sit and Look Out” by Walt Whitman ”
Get high-quality paper
NEW! AI matching with writer

In this analysis of “I Sit and look out “by Walt Whitman, the capitalization of the verb “sit”denotes the action of an onlooker. It is also symbolic of the speaker who sits idle and shows no sign to do anything.

His constant position is also indicative of his complacent confinement which is miles away from suffering multitudes. On the other hand, the idea of “I Sit and look out” is expressed through the term ‘look out’ that speaks of his own position which is safe and secure, away from the sufferings of the mundane world.

In ‘I sit and look out” by Walt Whitman, the usage of free verses is abundant which serves to denote a never changing situation. All throughout the poem, the poet keeps an undermined toned of pessimism and paints an apocalyptic imagery that hits the readers as they progress in the poem.

“I Sit and look out “by Walt Whitman is also a fine instance of the author’s disillusionment with the world that is evident through the first two lines of the poem and it continues to the point where he exclaims; “I SIT and look out upon all the sorrows of the world, and upon all oppression and shame; I hear secret convulsive sobs from young men, at anguish with themselves, remorseful after deeds done; I see, in low life, the mother misused by her children, dying, neglected, gaunt, desperate; I see the wife misused by her husband-I see the treacherous seducer of young women; The poem is more of a study of this dystopian world where oppression and shame rule the roost of the society.

The theme of “I Sit and look out “draws upon an image of seclusion as the poet feels that he is located and placed at an altitude that is way higher and away from the episodes of sufferings and misery. The paroxysmal sobs of youth stifled in World War, having an albatross around their neck is an imagery that speaks of their remorseful actions. Walt Whitman talks about children who have taken advantage of their own mothers and now she lies all alone distressed, her solitude beckons her children every moment. The poet speaks of a distressed time where wives are put to misuse by their husbands, cheated, abused and tortured.

The husbands are pen pictured as “callous lovers’ who picks up young women and deceives them without a shade of remorse or guilt. The theme of “I sit and look out”points at the jealousy of the human race among themselves, unrequited love that is seemingly impossible to hide. The angst and the anxiety of the poet, the fear and the tension that rumbles up the poet’s mind while he sits comfortably in his place is an awakening call for the readers to rise up and take a step in altering the situation.

Walt Whitman’s agony and meanness are justly defined in the lines; “I observe a famine at sea, I observe the sailors casting lots who shall be kill’d to preserve the lives of the rest, I observe the slights and degradations cast by arrogant persons upon laborers, the poor, and upon Negroes, and the likes; All these–all the meanness and agony without end I sitting look out upon,See, hear, and am silent.“ The poet seeks to demarcate emotions in his poemby introducing camouflage to pertain jealousy and unrequited love behind the mask of smiles and affability. The ego is hosted and the sufferings are subdued and the speaker is never at rest although he doesn’t move from his position. Perhaps, the process of being an onlooker is more painful than being the victim.

In other words, the poet calls one and all to rise and do what is right to free themselves from the shackles of pain and liberation and pacify their ego. It is the onlooker who sits silent through the dangerous aftermaths of war, the deaths of millions and autocracy that causes dents within the state. He has to bear the pain as he beholds the sight of prisoners-tortured and tormented-the most terrible byproduct of wars and battles fought. The pen picturisation is horrific, where sailors are thrown into the sea to fight the waves and survive to the shores. The poor workers, the Negros are subjected to slavery in the hands of the capitalist world where nothing prevails but oppression and penury.

“I Sit and look out ‘transforms itself to be a worthy satire of troubled times where agony and not beauty lies in the eyes of the beholder. It’s good to know:

Analysis of "I Sit and Look Out" by Walt Whitman. (2016, May 20). Retrieved from https://studymoose.com/analysis-of-i-sit-and-look-out-by-walt-whitman-essay 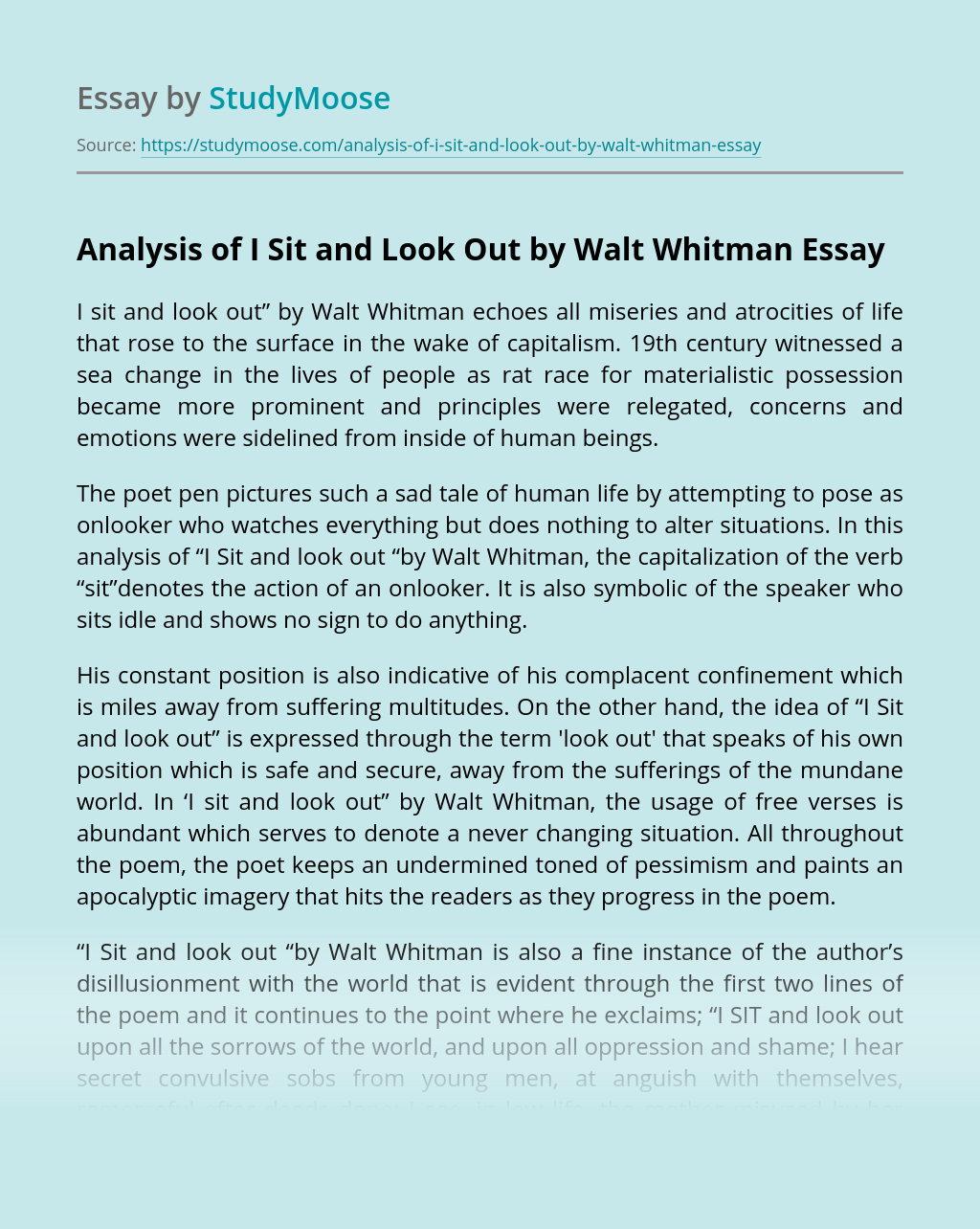 Turn in your highest-quality paper
Get a qualified writer to help you with
“ Analysis of “I Sit and Look Out” by Walt Whitman ”
Get high-quality paper
Helping students since 2015
Stay Safe, Stay Original