The Importance of Sex Education in School

Walking out of the high school building less than two years from her graduation date, is a young mom toting a child on her hip. She shushes the screaming baby, trying to stuff the newly printed out GED into the diaper bag dangling precariously from her shoulder. She’d had dreams of attending college and getting her dream job however, that all changed in the tenth grade.

She didn’t plan on being a teenage mother, but her lack of education on the subject led to just that.

Don't use plagiarized sources. Get your custom essay on
“ The Importance of Sex Education in School ”
Get custom paper
NEW! smart matching with writer

If only she’d been taught the consequences and risks that come along with having sex at an early age like contracting a sexually transmitted disease or becoming pregnant at an early age. Starting in junior high schools, a semester of health class should be devoted to educating students on sex health and awareness.

Sex education classes in schools should be more than an abstinence-only class. Sex education is any process dedicated to providing information about sexual techniques, practices, and health or human sexuality (Sex Education).

However there are two types of sex education offered in school systems: abstinence-only and comprehensive.

Abstinence-only tends to have a black and white approach to premarital sex. It is viewed as forbidden and religion seems to over shadow the real lesson. Instead of educating students on the risks of unsafe sex or providing safer alternative methods, they say that refraining from having sex until marriage is the only solution to ending teen pregnancy and the outbreak of STDs in the United States.

Since the average age a female gets married is 27.4 and males is 29.5, it is unrealistic to expect teeangers to abstain from sex until they’re married (Mackenzie).

Some abstinence-only sex education instructors use fear tactics to keep students from having sex, like exaggerating statistics on STDs and announcing that the only way to prevent getting infected, is to abstain from any form of sex (Sex Education Programs- Advocates for Youth). Oftentimes, teenagers reach out after they have already had sexual relations so it is important for them to receive accurate and unbiased information.

Twenty-five states require that sex education must be taught during school, yet only thirteen of those states require that the curriculum be medically accurate. Sex education classes should be medically accurate and should include alternative methods to reducing teen pregnancy and reducing the likelihood of catching a STD. Adolescents feel more confident whenever they are accurately informed, which encourages them to make safer choices by receiving a comprehensive sex education.

Sex education teachers should also educate adolescents on how to cope with puberty. Some pre-teens and teenagers are too embarrassed to talk to their parents about the changes happening in their bodies. It is important for adolescents to understand what is going to happen, before it does or at the very beginning of their own puberty. Girls begin to feel heightened emotions and start their menstruation cycle, while not understanding what is happening to them at around the age of thirteen.

Boys will notice that their voice changes and they start sprouting hair in places they’ve never had it before at around the age of fourteen (The 5 Stages of Puberty). It’s important that they know it’s normal and expected to go through these changes. Some females go through puberty as early as eight or as late as sixteen and some males go through puberty as early as nine and as late as sixteen (Boys and Puberty). So it is important that they realize they will grow at different rates because of their genders.

Without the validation that they’re normal and nothing is wrong with the way their body has changed, they could feel alienated from their peers. Sex education classes should educate both genders on the effects of puberty and how to cope with it. They should assure students of what is normal and what is not, so students know whenever something is truly wrong.

The topic of teenage pregnancy should be discussed in sex education classes, along with the proper use of contraceptives. Approximately one-in-four girls become pregnant at least one time before they turn twenty. Of these teen mothers, only half earn a high school degree by age twenty-two and they are more likely to live in poverty than mothers above the age of twenty (Teen Pregnancy Prevention).

Once teenagers have their first child, they don’t have the time to go to school and take care of a newborn, so they drop out of high school. CaSonya West was one of the many teenage mothers who dropped out of high school because she became an unexpected mother at the age of sixteen. She had plans to further her education at college, but getting pregnant changed everything.

The most difficult part to her, was realizing that she was just a kid herself and now she had to suddenly become a responsible adult and care for another human being. West stated that she didn’t regret having her son, but she wished she wouldn’t have had the it won’t happen to me mentality about getting pregnant (West). Teenage mothers are more likely to have a low income and need government assistance because they lack the education required to get a stable, well-paying job.

Having a child as a teenager, affects more than just education. It can cause numerous health issues to the mother and the baby, which can be fatal or life-changing. The probability of having a child with a low birth weight, which can lead to mental issues or infant death, is twenty-one percent higher than children born to mothers between the ages of 22-24 (Pregnancy Information for Teens, 4).

Since their children are more likely to need medical attention than others, they would need to visit the doctor’s office more often, but because of the fact that teenage mothers have a low income, they can’t afford numerous doctor bills. Some sexually active teenagers don’t believe they’ll ever become pregnant, yet they aren’t using the correct contraceptives or using them at all.

However, 90% of teenagers will become pregnant within a year of having sex without the use of contraceptives (11 Facts About Teen Pregnancy).  Some may think it’s a hassle to remember to take birth control pills everyday, or don’t want to get a prescription because their parents may be informed. There are multiple other alternatives, like condoms, birth control implants, birth control patches or shots (Birth Control).

Some sex-education classes refuse to address the topic of contraceptives because they either view it as a type of abortion tactic or they believe it would encourage students to engage in sexual activities. CaSonya West stated that she had never been formally introduced to contraceptives and wasn’t aware of the percentage of effectiveness. She felt like if she had been aware, she more likely would have refrained from having sex without protection of any kind, or refrained from sex completely (West).

Sex education classes should educate their students on the serious risks of contracting STDs. STDs are sexually transmitted diseases that are sometimes incurable. In 2014, nearly nineteen million cases of STDs were reported, nine million of those were from people ages fifteen to twenty-four (Yancey). Many high school students are either too embarrassed to discuss the possibility of them having STDs or are uneducated on the topic and don’t fully understand them.

Some teenagers believe that if they haven’t technically had sex or they’ve only had one sexual partner, then they aren’t at risk of having contracted a sexually transmitted disease (STD Statistics). However, some STDs like chlamydia, gonorrhea, syphilis and others can be transmitted through oral sex (Yancey).

They should be taught to look for symptoms and to regularly go to the doctor if they are sexually active because left untreated, some of the diseases can be fatal. Because of the lack of education on STDs, many teenagers believe that it isn’t serious if they have contracted something. The biggest thing they’re worried about is their parents finding out or word spreading at school that they’re infected. Some of the consequences are more serious than they think.

For example, chlamydia and gonorrhea can cause pelvic inflammatory disease, which often leads to infertility (Infertility & STDs). All it takes is one sexual partner to transmit a disease and then a teenager will never be able to conceive a child in the future. Other STDs can affect more than just the person who has contracted them. Some result in genital warts which can be passed on to a child during birth and if left untreated, will not go away (Genital Warts).

Some children who have never had sex, grow up having an STD because their mother was irresponsible and didn’t take the right precautions or treatments. Some teenagers believe AIDS, Hepatitis and HPV are now curable because of the numerous studies and billions of dollars that are spent searching for a cure (Yancey).

Sadly, that isn’t the case and once diagnosed, the only treatment is to help subside the painful side effects. If sex education classes taught students about the different types of STDs and the severity of contracting one, then they would be more likely to take the necessary precautions to avoid getting infected.

The Importance of Sex Education in School. (2019, Dec 18). Retrieved from https://studymoose.com/walking-out-of-the-high-school-building-less-than-two-years-from-example-essay 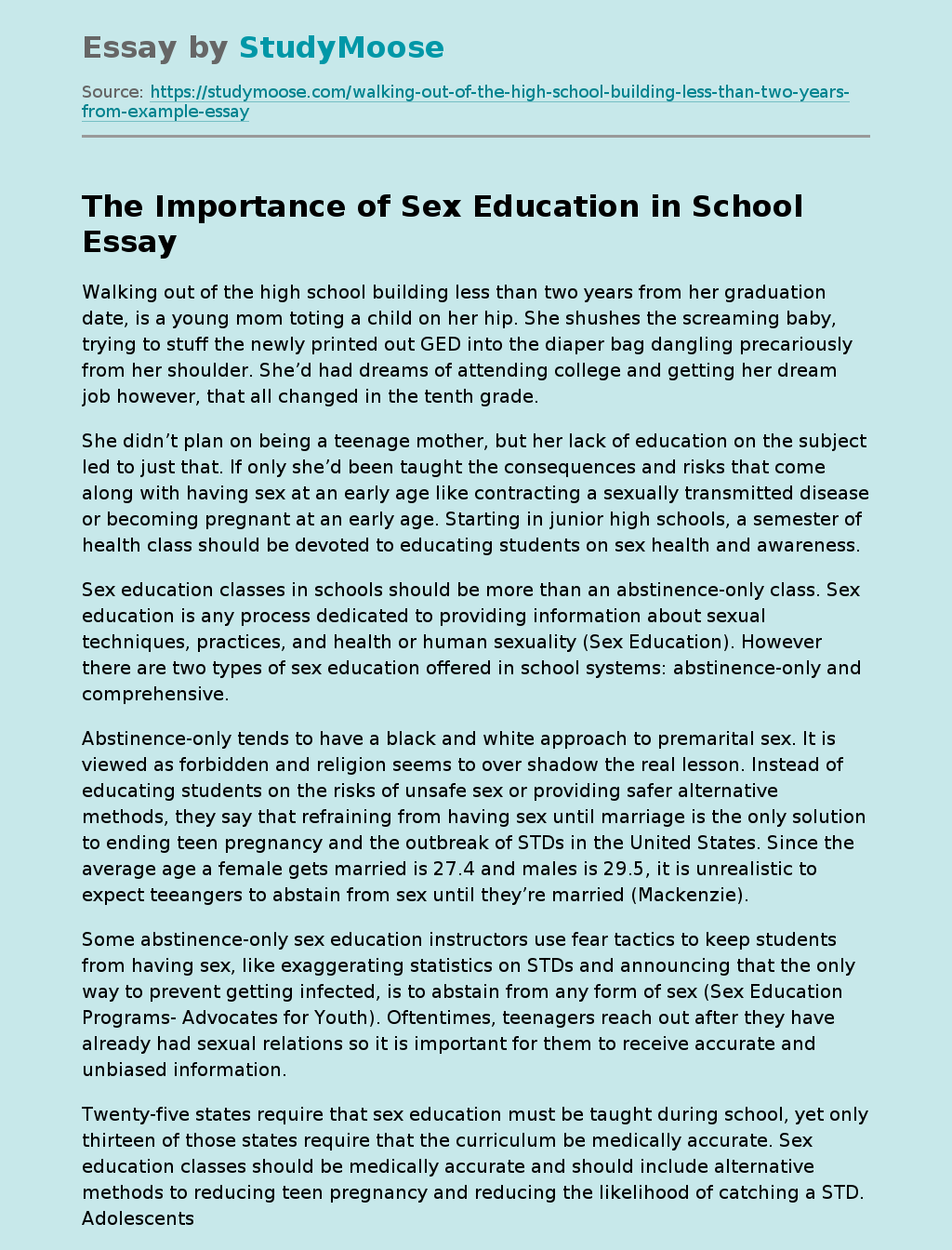