There are several specific quotes which depicts how Voltaire tried to champion or fight for the goals, beliefs and vision of a society that is enlightened. Some of these quotes include: “As long as people believe in absurdities they will continue to commit atrocities.” This is a very important quote by Voltaire in the society because it acts as an illustration of how a society would be if people cont9onue to hold on to absurdities. The things that people in the society need to believe in should be things that bring progress and not things that continue to generate controversies as well as misleading the society.

Don't use plagiarized sources. Get your custom essay on
“ A Several Specific Voltaire’s Quotes ”
Get custom paper
NEW! smart matching with writer

The other quote is, “I do not agree with what you say, but I’ll defend to death your right to say it.” This is another important quote through which Voltaire is seen to champion for the beliefs, goals and vision of the society. Every individual has the right of speech and freedom of expression hence no one should be prevented from airing their views or opinions as long as they do not infringe on the rights of others.

It is not necessary for everyone to agree with each other on ideologies. Therefore, by supporting the rights of other people, a society will be able achieve its goals, visions and maintain positive beliefs. From the quotes by Voltaire, there are many of them that I find quite fascinating and intriguing. However, the one that I consider to be my favorite quote is the one that says, “Every man is guilty of all the good he did not do.” This is one quote that touches on our behavior as human beings in this world hence the reason I chose it as my favorite quote.

The wit presented by Voltaire through this quote is admirable. In life, we as human beings we have the opportunities where we can be able to do good but in many occasions, people become so selfish that they cannot do anything good. If everyone would make use of the opportunities they have to “do good in the society”, there would be no vices in the society, crimes would be eradicated and many problems that people face such as poverty would be eliminated. This quote depicts what I yearn for in this world, to see everyone working for the good of all despite the differences that exist. I personally believe that if people “do good” the world would be a better place but we all fall short of this virtue of always doing good. Instead we have embraced selfishness and only pursue things that are of personal benefit and interest. Therefore, I completely agree that we are all guilty for not having done anything good despite having the opportunities.

After reading all the quotes by Voltaire, I must admit that the quotes are quite good and interesting as they touch on the lives of human beings and provide guidance on how to live this life. However, there are quotes which I failed to understand why Voltaire would say such things. I was left wondering of Voltaire was only putting forward his own thoughts and never did enough research. One of the quotes that I consider to be my least favorite and disagreeable is the one that says, “History is only the register of crimes and misfortunes.”

I find this quote to be quite misleading especially to the modern generation. Does it mean that there are no good things that happened in history? Is everything recorded as history that bad? This is disagreeable considering that there are a lot of good things which happened in history and have been clearly documented. The thinking of Voltaire in this quote is narrowed and disoriented with no facts. Inventions took place in the past and these have helped shape the modern world. Therefore, I totally disagree with Voltaire on this quote as it is misleading and does not contao9n any facts about historical happenings.

After reading the numerous quotes by Voltaire, I would say that the views presented by Voltaire are mixed views and a combination of several things. The quotes provided by Voltaire are quite helpful in the society because they advise, warn, encourage and provide guidance on how to live as a society. Voltaire portrays the society as one that needs guidance of which he provides through several quotes such as “I do not agree with what you say, but I’ll defend to death your right to say it.” On the other hand, some of the quotes show pessimism such as the quote on history as a registry when he says, “History is only the register of crimes and misfortunes.” Voltaire also sounds helpful when he says, “Let us work without theorizing, tis the only way to make life endurable.” Therefore, it can be observed that it is a mixture of things in the life of human beings that are presented in the quotes by Voltaire. 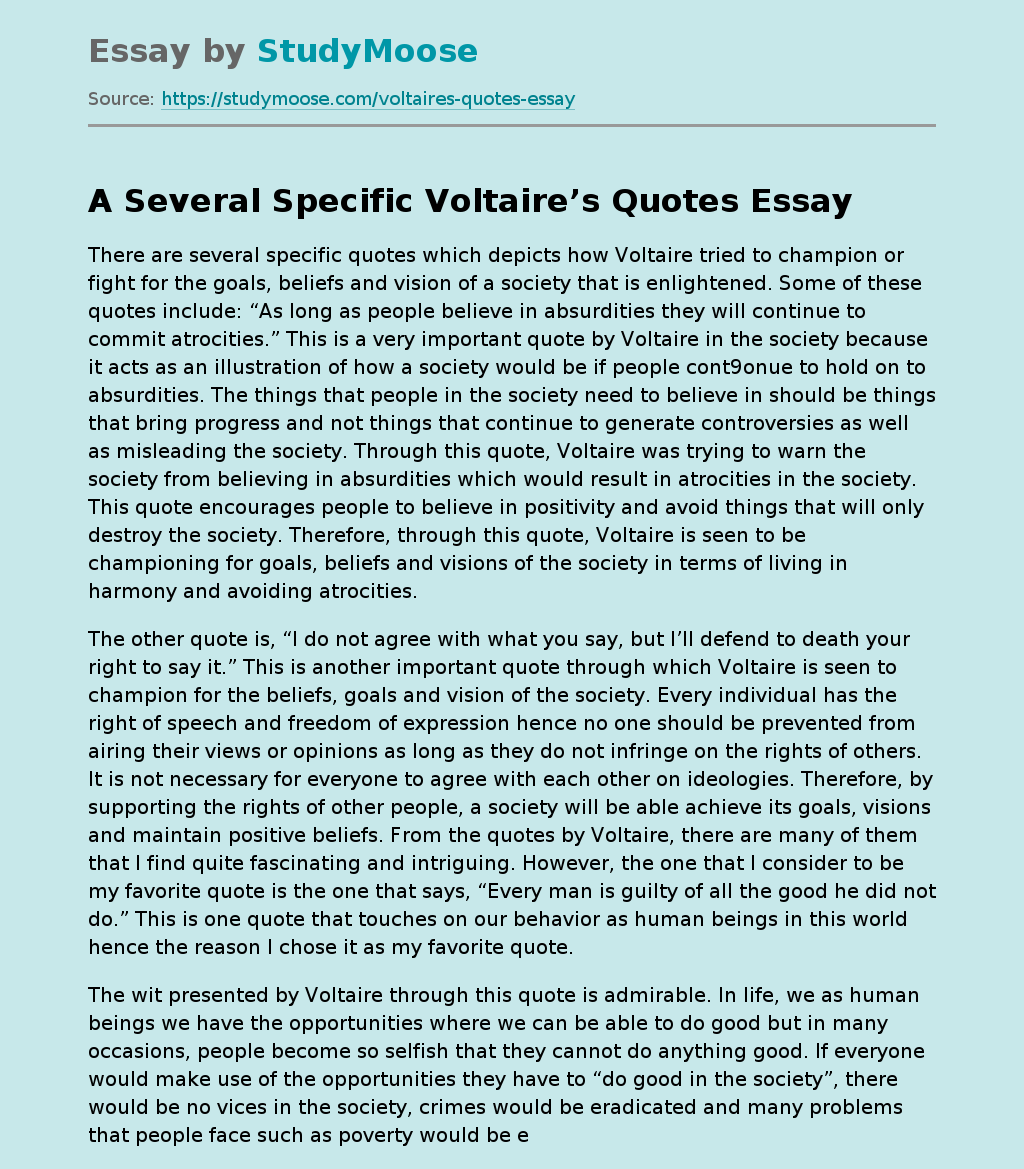