Social Themes in Candide by Voltaire

Philosophers like Voltaire wanted to work through aspects of society like monarchy, the Church, religion, and stance of women in society. Voltaire’s method of raising awareness about the issues in society was through his satirical works like Candide. In the eighteenth century, the use of satire in Voltaire’s Candide has been used to expose the social injustices in France and its surrounding area. Satirizing politics, religion, and class makes us realize how difficult it was to be a normal person and the difficulties and differences people faced when they slowly started getting rich.

Don't use plagiarized sources. Get your custom essay on
“ Social Themes in Candide by Voltaire ”
Get custom paper
NEW! smart matching with writer

One of the topics that Voltaire talks about in his satire is that of religion. In the eighteenth century, corruption and misconduct were on the high. Voltaire makes this point very clear by talking about these different circumstances throughout the story. The first was when he told of Candide’s teacher, Pangloss, letting an Anabaptist drown. The Anabaptists name was James. Candide could have saved James, Pangloss did not let him do so because he was an Anabaptist and believed that he had to die this way.

James dies in the seas of Lisbon attempting to save an ungrateful sailor. This exposes some of the hypocrisy of the Catholic church, as they believe that good deeds will eventually be rewarded by God in the form of a trip to Heaven in the afterlife. This incident goes against their belief, as Pangloss shows intolerance and lets a man trying to do a good deed perish in the act.

The Candide includes characters like Pangloss, the optimist, as well as characters like Martin the pessimists. Pangloss suffered from Syphilis and was driven to the point of begging but he still lived by his famous quote which describes this world as the “best of all possible worlds” (Voltaire). Martin who suffered personal and financial setbacks was fairly good at predicting the behavior of people but his pessimism swayed his judgment in the case of Cacambo whose honesty towards his master surpassed the greed posed by gold. Neither of the two philosophies work effectively. To achieve enlightenment, it is essential to draw away from philosophy. Voltaire mentions the hypocrisy in the Church. Officials had mistresses, in the case of The Great Inquisitor, a Portuguese Church official who shared Cunegonde as his mistress with Don Issachar. There were instances of homosexual affairs in the case of the Commander who was a Jesuit priest. The Candide also has mentions of a Pope who had vowed to celibacy but had a daughter. Society is portrayed as being flawed. Voltaire makes efforts to change society by mocking it instead of being pragmatic.

Another instance of Voltaire’s satirizing of religion comes in the sense of him pointing out immoralities committed by the religious followers. In the story, there are instances discussed involving a monk and a prostitute, a burglarizing friar, and a Jew who owned a sex slave. Although religious followers partake in questionable acts like this all the time, it is important that Voltaire points these acts out. “He (Voltaire) targeted Leibnitz’s teaching that ‘all is for the best’ by creating characters that fall into miserable situations and face both internal and external strife by attempting to fit it into the church’s world view” (Khan). Doing this shows that even though they are supposedly held to a higher standard, religious followers are just as human as everyone else. This highlighting of immoral acts could have angered the religious leaders and landed Voltaire with a proverbial target on his back.

Women in Candide were prostitutes; were sold as slaves, in the case of Cunegonde; were married to money like the Marquise of Parolignac who seduced Candide and stole his jewels; they were disease spreaders like Paquette, who spread syphilis to Pangloss; or portrayed as victims. Women were helpless but strong, they acquired what they wanted either by deceiving or tact. An example of a woman in that era was the daughter of a Pope, who suffers the death of her fiancé, who is raped by pirates and sold into slavery and suffers from cannibalism in wartime.

He also talks about how having a simple life was very important. At the end of the story, he plans on living a simple life. He ends up moving to a farmhouse and living with his friends. He also stays with this old woman who provided him with basic medical treatment after he was beaten in the street by members of the Bulgar army. He loves his lifestyle, as he has always been hustling and moving around to different places and meeting new people. “He (Voltaire) also came across the Quakers and was struck by their tolerance and simplicity, and even more so by the absence of priests in that religion” (Hewett). This quote exemplifies Voltaire’s feelings toward this simpler lifestyle. He seemed to move toward ideas of newer and unconventional schools of thought, like the Quakers absence of priests and a relatively simple lifestyle.

Social Themes in Candide by Voltaire. (2021, Dec 02). Retrieved from https://studymoose.com/social-themes-in-candide-by-voltaire-essay 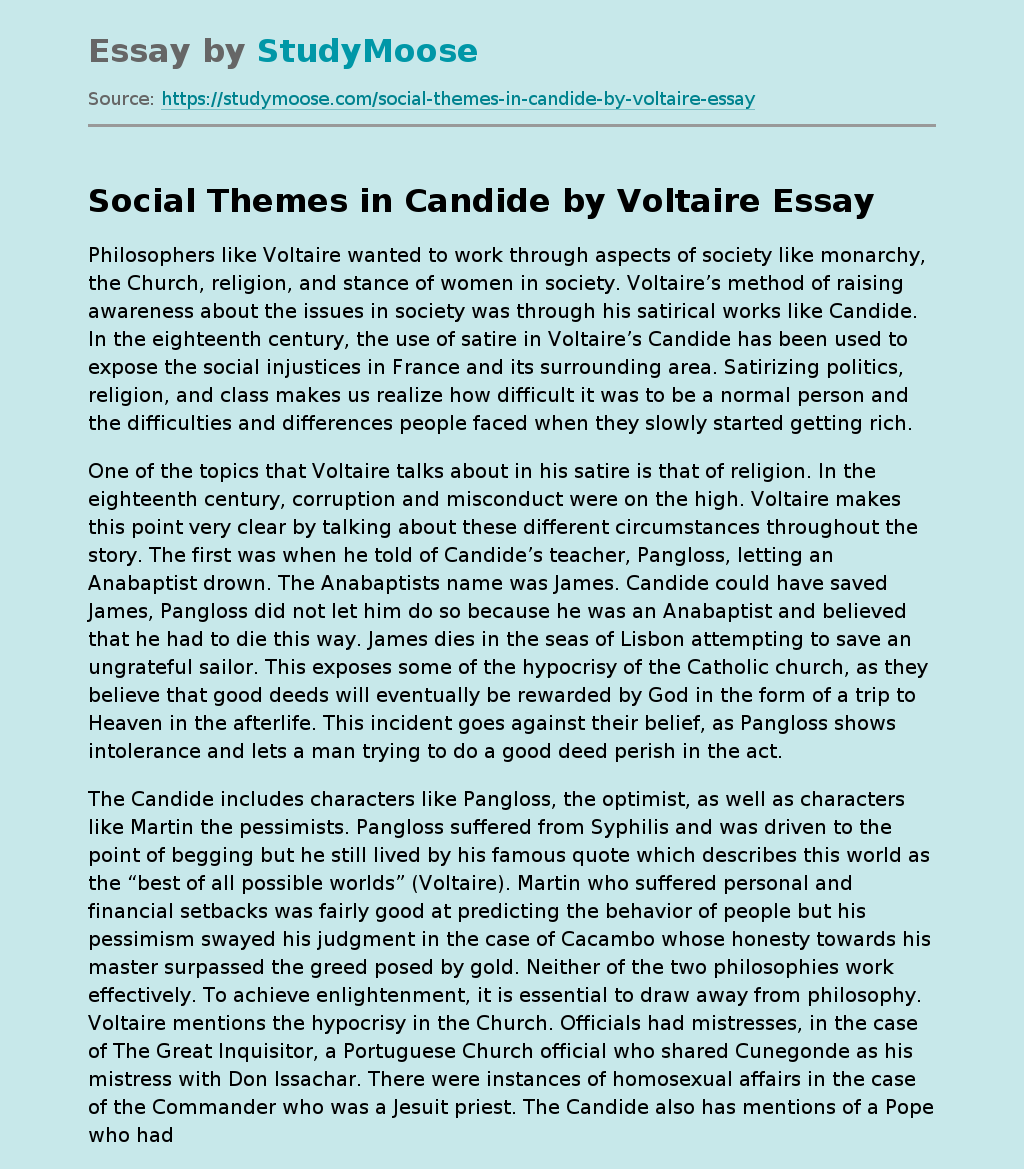