Aphra Bhen's Oroonoko "The royal Slave" and "Candide, Or Optimism"

Aphra Bhen was a prolific female playwright and author during the restoration period of English history. Bhen herself stood by the power of the monarchy. Her book ‘_Oroonoko_’ has hints within the text that royalty is seen as set apart from the rest of society; and that rank is the natural order of things. Though little is really known about Behn’s early years, evidence suggests that she may have had a Catholic upbringing; (1) however, in considering the text for analysis, Bhen’s position on religion shows that she found religion very constrictive to society, which I will discuss in detail later.

+84 relevant experts are online
Hire writer
Don't use plagiarized sources. Get your custom essay on
“ Aphra Bhen’s Oroonoko “The royal Slave” and “Candide, Or Optimism” ”
Get custom paper
NEW! smart matching with writer

François-Marie Arouet who is also known by his nom de plume Voltaire, was famous for his wit and for his advocacy of civil liberties, including freedom of religion, freedom of expression, free trade and separation of church and state. He was a French Enlightenment writer, historian and philosopher, and his Book ‘_Candide or Optimism’_ is a satirical philosophical tale which I will also discuss in detail later.

The first text to be analysed is found on page 11 of ‘_Oroonoko_’. The text depicts the “Indian” natives of Surinam, how they appear to the narrator, how they show love to each other and how they interact with the English governor.

The text begins with a vivid description of the natives. ‘they are extreme modest bashful, very shy and nice of being touched…’ […] ‘…and though they are all thus naked if one lives forever among them, there is not seen an indecent action or glance.

The text also contains Biblical perspective and religious connotations. In the first quarter of the narrative she states ‘…so like our parents before the fall…’ which she also connects with: ‘…and these people represented to me an absolute idea of the first state of innocence, before man knew how to sin…’ By placing these comments in this conjunction, together with the innocence she creates, she thus connects both the native man and the woman to Adam and Eve within their setting:- the jungle of Surinam, which thus creates an impression of the Garden of Eden as described in the Bible, in Genesis 3. This is something that her audience, having known the Biblical text accurately, would have been able to understand and thus take into consideration, when thinking about a man and a woman from a country a long way away.

The narrator considers this noble; when she sees their culture free from the social parameters of religion and informs the reader thus: ‘Nature is the most harmless, inoffensive, and virtuous mistress, it is she alone, if she were permitted, that better instructs the world than the inventions of man; religion would here destroy that tranquillity that they possess by ignorance.’

But she also sates in the first quarter of the text . ‘It seems as if they had no wishes, and nothing to heighten their curiosity’; and later adds: ‘where there is no novelty there is no curiosity.’ when this is considered with the biblical connections, there is the possible implication of rank detachment thus separating the natives from the Christian-European culture which she and her readers are a part of.

At the end of the text, she separates the natives even further from the colonists, when she describes a meeting with the Governor.

When the Governor cannot make the trip to see them, the natives conclude that he must be dead. When this it is seen that this is not the case, the natives call the Governor ‘a liar and guilty of that infamy’. On one level, this could be seen as ‘native justice’ as she calls it. However, it also implies that the natives are limited in their understanding, and possibly suggesting that colonisation is acceptable, moreover necessary for their development.

‘It’s a Jesuit it’s a Jesuit we will be avenged! And we’ll eat the Jesuit! ‘ say the Orillians after capturing Candide. Here Voltaire is seeing the native as very savage. But he is also viscously satirical and ironic, as Voltaire himself was taught by the Jesuit order. The omniscient narrator here gives us insight into what the natives are saying, and this adds to the viscous humour and the irony.

Candide then considers the philosophy of optimism which is the underpinning continuing theme within the text ‘All is for the best, no doubt, but I must say that it’s a cruel thing to have lost Mademoiselle Cunégonde and be roasted on a spit by the Orillions.’

Cacambo comes to the rescue by reasoning with the natives. Here Voltaire does not see a race that is inferior to the culture in Europe, but simply another form human being that can be reasoned with. As Cacambo states: that: ‘natural law teaches us to kill our neighbour all the world over’. […] ‘The Orillians might be cannibals’ but as he says ‘We Europeans have other means of eating well’ thus suggesting that there is little that separates modern society from the native, other than money.

The Orrillians are convinced by Cacambo’s reasoned speech and not only do they let them go, they give them women and are treated with “every civility” again underlining the ‘civility’ of the native population and thus informing the reader of the day that the natives are civilised in their behaviour, despite where they live and what they wear and try to do.

As the piece end’s, Candide is overcome both by his deliverance but also by the natives themselves “what men! What customs!” he says, going back to the theory of Optimism and the issues that relate to cause and effect: ‘ if I had not run my sword right through Cunégonde’s brother, I would have been eaten alive without fail.’ […] ‘It seems to me that nature is a good thing, since these people, instead of eating me, showed me a thousand civilities just as soon as they know I was not a Jesuit.’

In its tone style and genre ‘_Candide or Optimism’_ is a sharply satirical, philosophical tale that stands against the Leibnitz’s argument for philosophical optimism which is summed up in the words of Alexander pope: ‘whatever IS, IS RIGHT’. (2) In its tone style and genre ‘Oroonoko’ is a classical tradgedy where the hero is brought low by personal character flaws or outside circumstances.

In comparing and contrasting the texts, both consider colonisation and exploration: In considering the concept of exploration within ‘_Oroonoko_’ Bhen paints a vivid picture of the passivity and the beauty of the natural order, and how this justifies hierarchal society, Whereas, in ‘_Candide_’ Voltaire paints a very different picture, where humanity as a whole is struggling with its very nature, and only reason and enlightenment can help humanity progress.

In considering colonisation, Bhen supports the idea of colonisation as a means of financial gain for the homeland. Therefore the natives are shown as a species on their own but a secondary species, next to the European colonists which thus supports the idea of slavery, as a means to an end, despite the suffering that slavery incurs. This is seen in how she considers the natives in the text, who are considered, on the whole as naïve.

In ‘_Candide_’ Voltaire gives us a very complex picture of a world with complex cultures that simply do not interact well. Suggesting that colonisation is an imposition of one culture upon another for the sake of greed. This too is seen in the way he portrays the natives in the text, and though both consider religion to be a man-made construct that is difficult and dangerous to impose upon another culture. It is Bhen’s perspective of the natives that is demeaning, whereas Voltaire’s position is one of equality where we are all the same ‘the world over’.

‘_Oroonoko_’ by Aphra Bhen and ‘_Candide_’ by Voltaire, Both have varied and complex arguments relating to slavery and the plight of humanity. Both are very different and tell two very different stories of life in other lands. The fact that they are still in print now, is a reflection of their importance in understanding the attitudes and cultural aspects of the time that they were written. This in turn, still makes them as important as they were when they were first written. 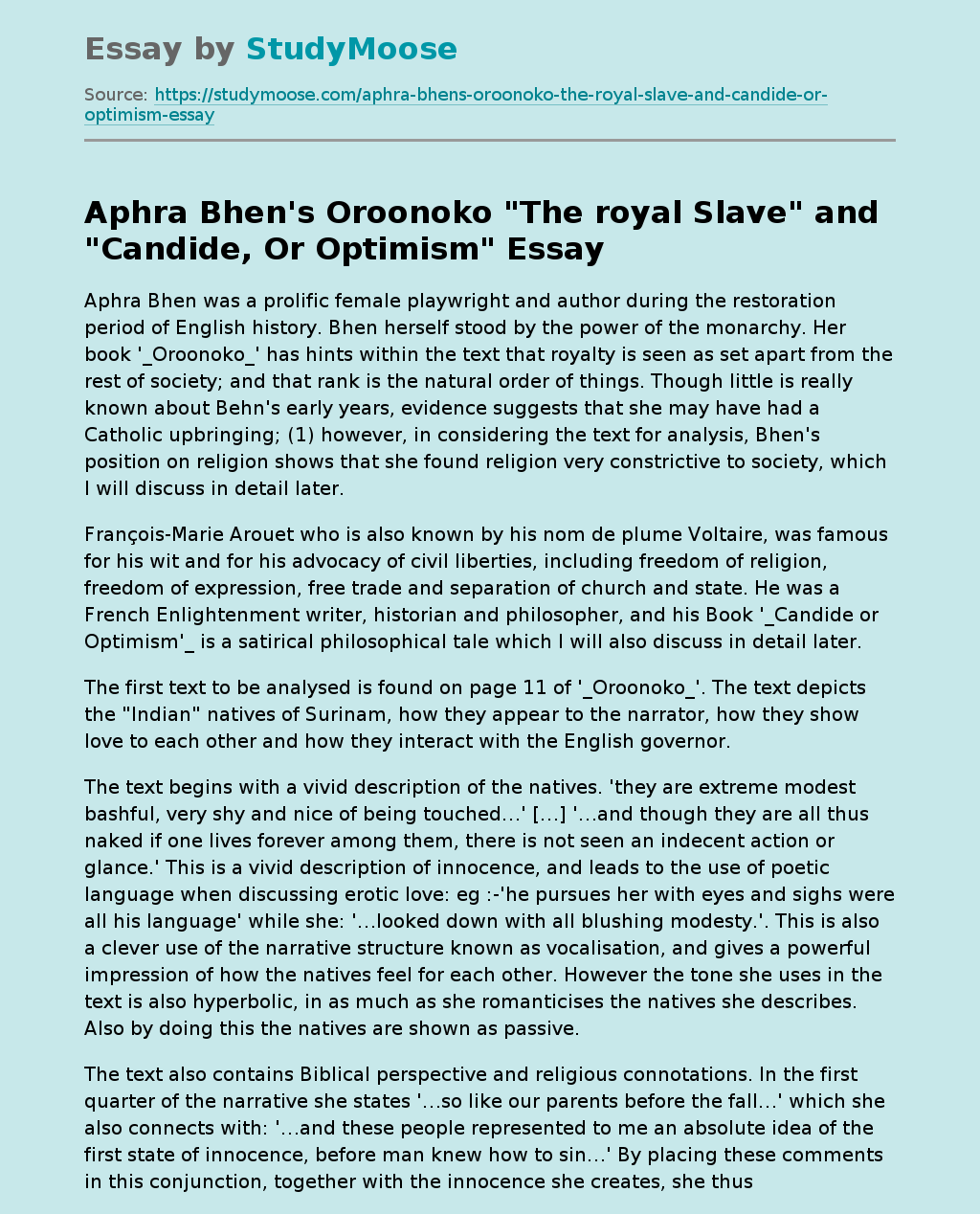