A Thesis Statement on the novel Candide by Voltaire

Don't use plagiarized sources. Get your custom essay on
“ A Thesis Statement on the novel Candide by Voltaire ”
Get custom paper
NEW! smart matching with writer

It seems ironic that Candide remains optimistic despite all that he had experienced; the banishment from the castle, the flogging by the soldiers and the sinking of the ship.

All these events would have made a weaker man fall on his knees and curse the heavens; but not Candide. After all, everything is for the best. Nevertheless, Candide retains his goodwill, generosity and ironically, his optimism. The concept of fatalism is taking the easy way out.

There are many instances where Candide could have avoided such unfortunate circumstances; like losing his sheep as well as his treasure. Not only that, he squandered his remaining treasure to unworthy individuals. Another instance was when Candide was flogged. He merely accepted it. He was thinking along the lines that everything is all for the best. But to think about it, how unjust is it to be lashed a thousand times for being misunderstood as deserting. In some way, Voltaire was criticizing citizens who could accept the unjust and irrational decisions of their government.

In connection with the idea of fatalism is the concept of free will. If humans were given the gift of free will, then the idea that everything is all for the best would be inconsistent. A person who has free will would be capable of shaping his or her own destiny. In lieu of this, Candide should be able to change the events that weren’t suppose to happen to him or if they did happen, then the result would not have been so disastrous or it could have at least been minimized.

One example had been where Candide stabbed the Baron, Cunegonde’s brother. He could have restrained himself and could have conducted an oral argument instead. What Candide did was rash and unwise that it was no surprise that it would end disastrously. Today, a person is expected to act and speak tactfully. There would be chaos if everyone wanted to have their own way.

Another example was when Candide and his companion were nearly eaten by the Oreillons but were saved  because he killed a Jesuit, Cunegonde’s brother, the Baron. In this time, Candide thanked his good fortune for killing a Jesuit to avoid being eaten. It should have crossed his mind that if he had not stabbed the Baron, then they would have not been in that situation in the first place. It is easy to blame every happening in life as part of a grand plan. That everything is destined and fated. But if it is, then why is there free will?

It could not merely be some trick to man to think that he has control over the events in life. Constant striving to be better is what makes the world go round. The discovery of unknown places and uncharted waters are the product of motivation and will of men. In essence, man’s free will is the reason. All the consequences of one’s actions are due to one’s interactions.

Candide’s optimism, naivete and innocence may have drawn its source from Mademoiselle Cunegonde. She’s beautiful and charming and guileless. To Candide, she’s the one reason to remain living despite all the miseries of the world. In some ways, she had also been the reason why in the later part of the novel, Candide encountered many unfortunate events. He even left the utopian world of El Dorado just to be with his beloved Cunegonde. Cunegonde symbolizes Candide’s optimism.

In the novel, Voltaire also portrays the human being’s love of life. The old woman was acknowledged as the person who encountered the most unfortunate miseries. However, in spite of all that, she’s admits that she still loves life and never would she have killed herself.

The “All for the best” concept was finally refuted and rejected by Candide. In the novel, Pangloss said to Candide “All events are linked up in this best of all possible worlds; for, if you had not been expelled from the noble castle by hard kicks in your backside for love of Mademoiselle Cunegonde, if you had not been clapped into the Inquisition, if you had not wandered about America on foot, if you had not stuck your sword in the Baron, if you had not lost all your sheep from the land of El Dorado, you would not be eating candied citrons and pistachios here”. Upon which Candide replied, “Tis well said, but we must cultivate our gardens”. (Voltaire, 1949)

This shows that nothing happens without a reason. Many times in the novel, cause and effect was mentioned. That is correct; everything that happens would have an equal effect. Every action has an equal reaction. Even as simple as growing fruits and vegetables is equivalent to days and nights of hard work. They did not just magically appear from the ground or fallen from heaven. It’s the same with what happened to Candide and his companions. Some events may have been the act of God, but it is up to man to ensure that everything would be all right.

A Thesis Statement on the novel Candide by Voltaire. (2017, Mar 16). Retrieved from https://studymoose.com/a-thesis-statement-on-the-novel-candide-by-voltaire-essay 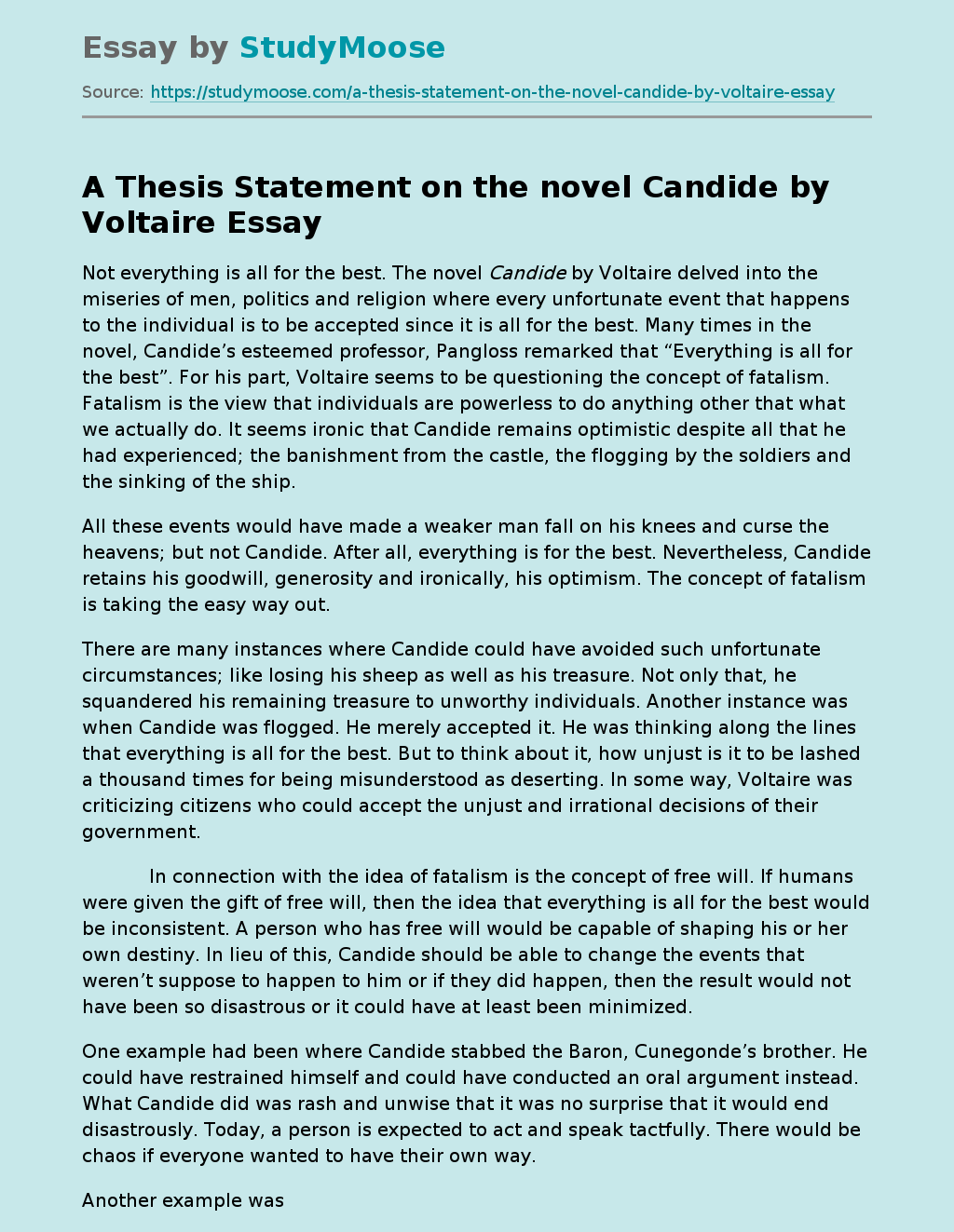