What is Verbal Abuse?

• Is a form of battery that involves the use of words, rather than blows and punches.

• Many people consider verbal abuse as blatantly offensive language designed to humiliate and gain power over another person.

• Is persistent behaviour using words and/or “mind games” to instill self doubt in the victim and to build the abuser’s sense of dominance and control.

• When one partner is constantly criticizing or berating the other. A person may feel constantly blamed or made fun of.

Don't use plagiarized sources. Get your custom essay on
“ Verbal Abuse ”
Get custom paper
NEW! smart matching with writer

This is all emotionally damaging, and over time, may erode someone’s self-confidence or self-worth.

Verbal abuse is a serious threat to a person’s well-being. It has grave effects on the emotional, psychological and physical wellness of a person. Moreover, it’s the monster that silently breaks a family, and destroys a home.

Patricia Evans, in her book “The Verbally Abusive Relationship – How to Recognise it and How to Respond” lists 15 different categories of verbal abuse commonly employed by verbal abusers, which we will have a closer look at below.

1. Withholding – This is when one choose to keep all significant portion of one’s thought, feelings, hopes and dreams to one’s self and to remain silent and aloof to the other. Refusal to share ideas, feelings, thoughts, dreams, and intimacy between partner.

Abuser will reveal as little as and to maintain an attitude of cool indifference.

The verbal abuser who chooses to withhold can add a variety of flourishes and camouflages to his withholding, such as pretending not to hear, picking up something to look at while his partner is sharing or watching television while saying “Go ahead, I am listening” when it is clear that he is not.

✓ Partner doesn’t speak with, touch or embrace for several days.

✓ “ I dont wanna talk to you, you always gets too emotional”

2. Countering- Opposing one’s thoughts, belief, feelings, perception and feeling. If the other person sees things differently, the abuser may feel they are loosing control and dominance, because of this, abuser chooses to argue against it. Sometimes, he is constantly countering or correcting everything she may say or do.

It prevents the partner from knowing what her mate thinks about anything because sometimes abuser will cut off discussion in mid sentence before the other finishes their thought. In many ways he cannot even allow her to have their own perception.

✓ One said what they are watching is violent: “No its not violent, your just overreacting!

✓ How dare she have a different view!“

3. Discounting- It will tell you that your thoughts, belief, feelings, perception, feeling and experience worth nothing or has a lesser value. It also minimizes the person’s accomplishments.

It denies the reality and experience of the partner and extremely destructive. It denies and distorts the partner’s actual perception of the abuse and is, therefore the most insidious form of verbal abuse.

✓ He will say something that gives her the message “Your feeling and experiences are wrong, they are worth nothing.”

✓ “You’re making a big deal out of nothing”

✓ “You always jump to conclusions”

✓ “You don’t know what you’re talking about”

✓ “ You take everything the wrong way.”

4. Disguised as a joke- Telling jokes about the person that humiliate and embarrass. Comments refer to feminine or masculine nature of the partner to their intellectual abilities, physical attributes or competency.

Comments may masquerade as humour; they cut to the flesh of

sensitivity. The verbal jabs may be delivered with great skills, but they have the same effect of diminishing the partner and throwing her off balance.

✓ “Its so funny that he lost his wallet and borrow my money to pay for our dinner, he’s an idiot sometimes”

5. Blocking and Diverting- Outright refusal to communicate. It may also include his control over the discussion. This may be in a form of direct demand or diverting. Diverting is when changing the topic, none of the partner’s question is answered in a thoughtful or considerate way.

Blocking is a technique verbal abusers utilize to end a discussion or communication about a certain issue. He might block further discussion of a specific issue by saying, “Just drop it!,” “You always have to be right!,” or, “Will you get off my back!”

Other times a verbally abusive partner may block discussion by diverting. When he does this, he changes the topic or makes some irrelevant, often accusatory comments. Some examples include, “It’s too complicated for you to understand,” and, “I am sick of your complaints!”

✓ You’re just trying to have the last word!

✓ You think you know it all!

✓ This conversation is over!

✓ One express that she’s hurt he will say: “Where are my clean clothes again?”

✓ One said that they need more time together he said: “ The game was about to start”

6. Accusing and Blaming- Verbal abusers tend to blame their partners for their anger or irritation. They also accuse their partners of wrongdoing, such as trying to start fights, infidelity, lying, and provoking him. Some examples of statements that are accusatory and blaming include, “You’re just trying to start a fight,” “You’re attacking me,” and, “I’ve had it with you.” Consist of statement or retorts which are design to shift the blame and the emphasis from abuser to victim.

✓ One said that she wish he wouldn’t talk to her in that tone of voice: “Well, if you wouldn’t act so stupid, I didn’t need to.”

✓ “If you didn’t make me mad, I wouldn’t have to treat you like that”

7. Judging and Criticizing- Putting down the person’s thoughts, actions and feeling. The verbal abuser may judge his or her partner and then express his judgement in a critical way. If the partner objects, the abuser may tell her that he is just pointing our something to be helpful, when in reality he may be expressing his lack of acceptance of her.

✓ Statements which begin with “The trouble with you is…” are judgmental, critical and abusive.

✓ “Your problem is….” are judgmental, critical and abusive.

✓ “How could you have forgotten that.”

8. Trivializing- Trivializing says, in so many words, that what you have done or expressed is insignificant. When trivialising is done in a frank and sincere tone of voice, it can be difficult to detect. If the partner is very trusting, she may listen with an open mind to the abuser’s comments and end up feeling perplexed that he doesn’t understand her or her work or her interests.

Trivialising can be very subtle, so that the partner is left feeling depressed and frustrated but isn’t quite sure why. It can be confusing to the partner because, if she doesn’t recognise it for what it is, she believes she somehow hasn’t been able to explain to her mate just how important certain things are to her. The abuser may feel one up when he puts his partner down, but his partner is kept on an emotional roller coaster.

✓ “So what if you are? I need your help anyway.” tired

✓ “You are such a baby! I can’t believe you’re scared of storms!”

9. Undermining- Undermining not only withholds emotional support, but also erodes confidence and determination. The abuser who undermines his partner has usually verbally abused her in many other ways. Consequently, her self-esteem and confidence are already low, making her that much more vulnerable to the abuse.

Sabotaging is also a way of undermining, such as disruption and interruption. For example, the abuser my sabotage his partner’s conversations with others by causing some disturbance. He may also simply interrupt her by finishing her story, opposing her or negating her.

✓ Partner: What a pretty flower!
Abuser: A flower is just a flower.

o Partner: I’d like to find out if there are any…… Abuser:*What’s the point?
OR Why bother?
OR Who cares?
OR I don’t see that that’ll get you anywhere.

✓ Who are you trying to impress?

10. Threatening- Threatening manipulates the partner by bringing up her worst fears. Verbally abusive threats usually involve the threat of loss or pain.

They are designed to frighten us and verbally beats us to submission. It often made us to prevent us from leaving an abusive relationship or persuade us back after leaving.

✓ “Do what you want or I will get really angry.”

✓ “You will regret going out with him!”

11. Name Calling -Stripping the person’s identity by using a fowl name. Insulting names and personal “labels” are abusive, as are demeaning sexual references.

The declaration by the abuser that what occurred didn’t occur is abusive. Everyone forgets what happened now and then. However, consistently forgetting interactions which have a great impact on another person is verbally abusive denial.

Often, after the partner collects herself after being yelled at or put down, she may try to talk to her mate about it. He will have conveniently “forgotten” the incident, saying, for example, “I don’t know what you’re talking about. I’m not going to listen to this.”

13. Ordering-Ordering denies the equality and autonomy of the partner. When the abuser gives orders instead of asking respectfully for what he wants, he is treating his partner as if she were the glove on his hand, automatically available to fulfil his wishes. Abuser treats the other as a slave.

14. Denial- Although all verbal abuse has serious consequence, denial is one of the most insidious category of verbal abuse because it denies the reality of the partner.

When confronted about hurtful and unacceptable behavior, the abuser denies any wrongdoing.

Most damaging forms of abuse because it denies the partner’s experience.

✓ “We never had that conversation.”

✓ “You think I always hurt you? Look at how you treats me.”

15. Abusive Anger- Anger underlies, motivates and perpetuates verbally abusive behavior.It is that unexplicable explosion of rage which we try to pacify, and that brooding uneasiness we can sense just in the presence of our partner. When we ask our partner what they are angry about, the anger is likely to be denied outright, or we are likely to be verbally abused in some of the ways described above.

“He said the problems in our marriage were because of me, that he didn’t have a problem. That he got angry because of what I did or how I was; if I would just be better, than he wouldn’t have to get angry. So I fixed his favorite gourmet meals, cleaned the house, said the right things and tried to change myself, thinking he would stop being angry. But he always found something else to be angry about.”

Verbal Abuse. (2017, May 29). Retrieved from http://studymoose.com/verbal-abuse-essay 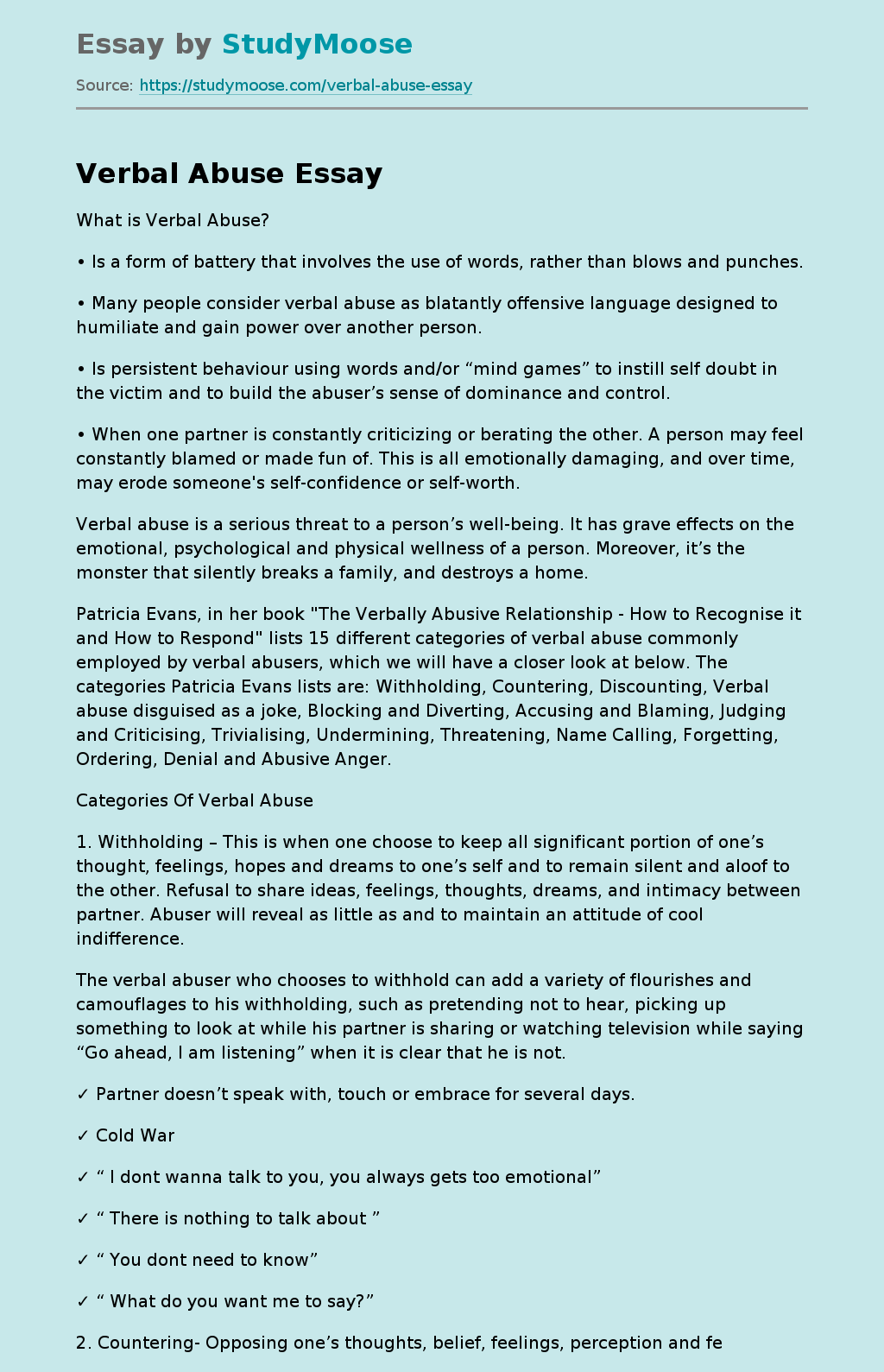