Varanasi, or Benaras, (also known as Kashi) is one of the oldest living cities in the world. Varanasi`s Prominence in Hindu mythology is virtually unrevealed. Varanasi was variously known as Avimuktaka, Anandakanana, Mahasmasana, Surandhana, Brahma Vardha, Sudarsana,Ramya, and Kasi. Mark Twain, the English author and literature, who was enthralled by the legend and sanctity of Benaras, once wrote : “Benaras is older than history, older than tradition, older even than legend and looks twice as old as all of them put together” .

Don't use plagiarized sources.
Get Your Custom Essay on Varanasi Just from $13,9/Page

According to the ‘Vamana Purana’, the Varuna and the Assi rivers originated from the body of the primordial Person at the beginning of time itself. The tract of land lying between them is believed to be ‘Varanasi’, the holiest of all pilgrimages. The word ‘Kashi’ originated from the word ‘Kas’ which means to shine. Steeped in tradition and mythological legacy, Kashi is the ‘original ground ‘ created by Shiva and Parvati, upon which they stood at the beginning of time.

Varanasi is the microcosm of Hinduism, a city of traditional classical culture, glorified by myth and legend and sanctified by religion , it has always attracted a large number of pilgrims and worshippers from time immemorial. To be in Varanasi is an experience in itself an experience in self–discover an eternal oneness of the body and soul. To every visitor; Varanasi offers a breathtaking experience.

The rays of the dawn shimmering across the Ganges, the high-banks, the temples and shrines along the banks bathed in a golden hue soul stirring hymns and mantras alongwith the fragrance of incense filling the air and the refreshing dip in the holy waters gently splashing at the Ghats. Varanasi – the land where experience and discovery reach the ultimate bliss. Varanasi is also renowned for its rich tapestry of music, arts, crafts and education. Some of the world renowned exponents India has produced in these fields were schooled in Varanasi’s cultural ethos.

Luminaries apart, Varanasi abounds in the art of silk weaving, an exotic work of art which manifests itself in precious Banarasi Silk Sarees and Silk brocades which are cherished as collector’s items across the world today. The land of Varanasi (Kashi) has been the ultimate pilgrimage spot for Hindus for ages. Often referred to as Benares, Varanasi is the oldest living city in the world. These few lines by Mark Twain say it all: “Benaras is older than history, older than tradition, older even than legend and looks twice as old as all of them put together”.

Hindus believe that one who is graced to die on the land of Varanasi would attain salvation and freedom from the cycle of birth and re-birth. Abode of Lord Shiva and Parvati, the origins of Varanasi are yet unknown. Ganges in Varanasi is believed to have the power to wash away the sins of mortals. Ganges is said to have its origins in the tresses of Lord Shiva and in Varanasi, it expands to the mighty river that we know of. The city is a center of learning and civilization for over 3000 years. With Sarnath, the place where Buddha preached his first sermon after enlightenment, just 10 km away, Varanasi has been a symbol of Hindu renaissance.

Knowledge, philosophy, culture, devotion to Gods, Indian arts and crafts have all flourished here for centuries. Also a pilgrimage place for Jains, Varanasi is believed to be the birthplace of Parsvanath, the twenty-third Tirthankar. Varanasi is the hub of arts and crafts, particularly silks and brocades with gold and silver threadwork, carpet weaving(a carpet-weaving centre is at Bhadoi), Wooden toys, bangles made of glass, ivory work, perfumes, artistic brass and copper wares and a variety of handicrafts.

What was the cantonment grave yard in the past during British Raj is now the location of Varanasi’s Arts and Crafts Vaishnavism and Shaivism have co-existed in Varanasi harmoniously. With a number of temples, Mrs. Annie Besant chose Varanasi as the home for her ‘Theosophical Society’ and Pandit Madan Mohan Malviya, to institute ‘Benares Hindu University, the biggest University in Asia. Ayurveda is said to be originated at Varanasi and is believed to be the basis of modern medical sciences such as Plastic surgery, Cataract and Calculus operations. Maharshi Patanjali, the preceptor of Ayurveda and Yoga, was also affiliated with Varanasi, the holy city.

Varanasi is also famous for its trade and commerce, especially for the finest silks and gold and silver brocades, since the early days. Varanasi has also been a great center of learning for ages. Varanasi is associated with promotion of spiritualism, mysticism, Sanskrit, yoga and Hindi language and honored authors such as the ever-famous novelist Prem Chand and Tulsi Das, the famous saint-poet who wrote Ram Charit Manas. Aptly called as the cultural capital of India, Varanasi has provided the right platform for all cultural activities to flourish. Many exponents of dance and music have come from Varanasi. 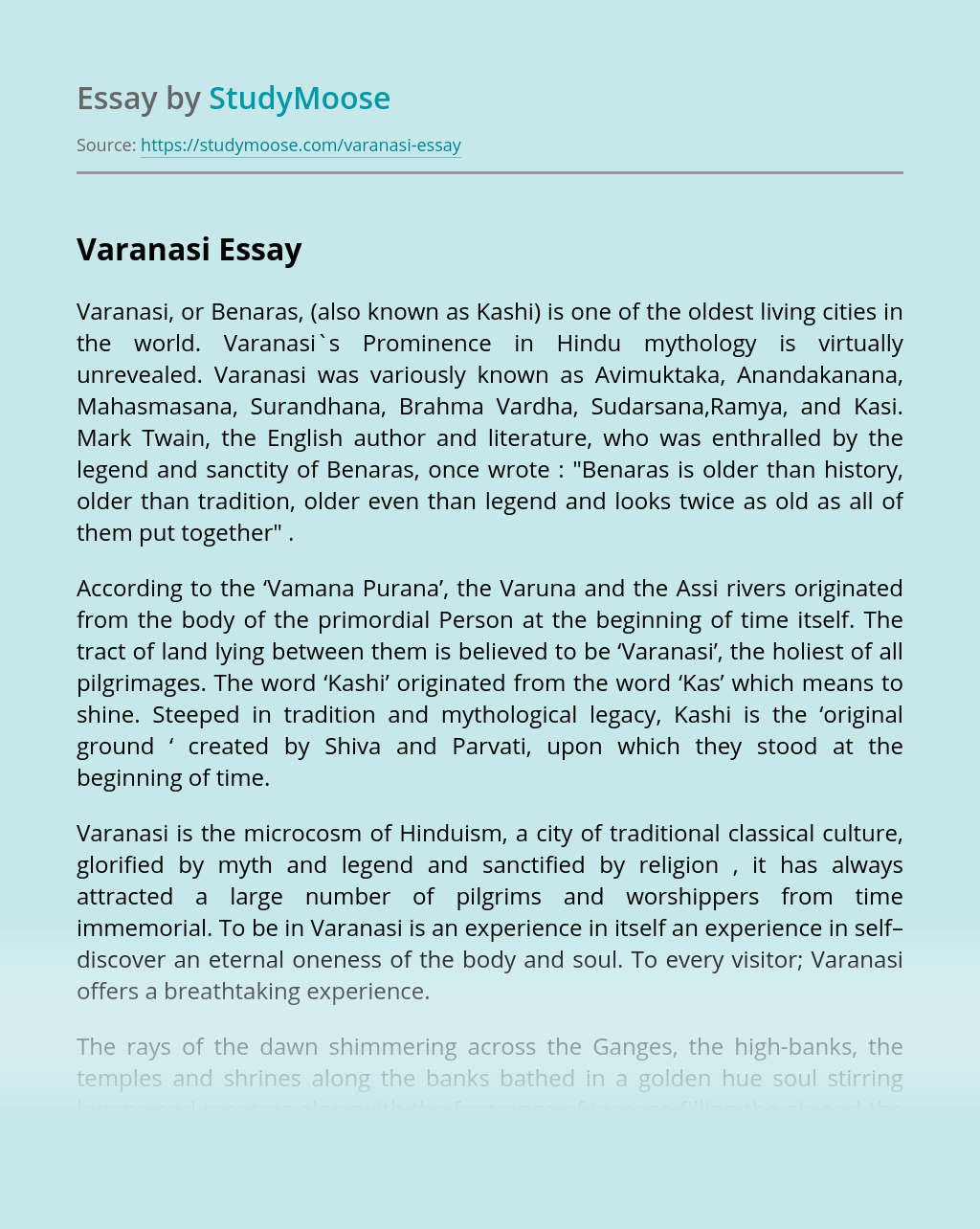