Women in "The Importance of Being Earnest"

“The Importance of Being Earnest” was written by the famous Irish author Oscar Wilde. The play represents Wilde´s late Victorian view of the aristocracy, marriage, wit and social life during the early 1900’s. His characters are typical Victorian snobs who are arrogant, overly proper, formal and concerned with money. The women are portrayed as sheltered, uneducated, and some as dominating figures over the men in their lives. There is no sense of identity for Cecily and Gwendolen, the only woman within the play that clearly stands out is the Governess, Lady Bracknell.

Don't use plagiarized sources.
Get Your Custom Essay on Women in “The Importance of Being Earnest” Just from $13,9/Page

Wilde creates Lady Bracknell to represent society during the 1900’s. Her tone is always earnest: she is arrogant and she speaks in commands, judgements, and pronouncements. She is always serious and authoritative, being the adult figure in the play; she imposes the rules and authority. However much of what she says is ridiculous, hypocritical, or self-contradictory. Lady Bracknell contradicts herself when she wonders about the possibility of Algernon and Cecily getting married and she does not agree with mercenary marriages, but she herself married into the same situation.

“But I do not approve of mercenary marriages. When I married Lord Bracknell I had no fortune of any kind.” (604). Lady Bracknell is always thinking of money when it comes down to these circumstances.

If Algernon and Cecily get married, they will share her considerable amount of wealth. “A hundred and thirty thousand pounds! And in Funds! Miss Cardew seems to me a most attractive young lady, now that I look at her.” (604). She also finds long engagements not acceptable as, “They give the people opportunity of finding out each other’s character before marriage,” (605). Lady Bracknell has this idea of making someone look something that they are really not. As long as you look good, that is what is important. This causes the women in the play such as Cecily and Gwendolen to live sheltered and uneducated lives.

Simply put Cecily is a country girl, while Gwendolen is a city girl; with that in mind they are similarly portrayed by Wilde. Both women lead a very sheltered life, which in turn takes away from their educations. The women are far from stupid, but they are not well informed with the ways of the world, foremost the ways of the society they live in. Gwendolen is sheltered by her mother, Lady Bracknell, who does not approve of education in England, as she puts it, “Fortunately in England, at any rate, education produces no effect whatsoever.” (577), most likely did not sent her daughter to any educational institute other than a Manner’s School for Women.

Gwendolen herself understands what her mother try’s to do to her, “mamma, whose views on education are remarkably strict, has brought me up to be extremely short-sighted” (594). Cecily is sheltered aswell, but her locating is the reason for it. She resides in the country and even though an education is offered, she is not interested, “But I don’t like German. It isn’t at all a becoming language. I know perfectly well that I look quite plain after my German lesson.” (583). Both women lead sheltered lives which creates boredom and imagination within their minds.

Cecily and Gwendolen have both fallen in love with a name, which is part of their fantasy that they have imagined because of their utter boredom. Wilde makes a point to show that these “important” women in society talk more than they actually do. Nothing is truer when it is revealed what is written in Cecily’s diary, “You can see the entry if you like. (Shows diary.) “Today I broke off my engagement with Ernest. I feel it is better to do so. The weather still continues charming.” (592). Everything in her diary has been imagined with the exception of the weather. There is no difference with Gwendolen as she too keeps a fictional diary on hand to keep her occupied.

Both women keep their diary’s also as records to their lives, although most of the information in them is imagined; they still believe in what is written and the both use it to figure out who is actually engaged to Ernest. Both women do not work, do not host social gatherings, or do not go to school, so they find themselves with much time on their hands and both have a very active imagination. They have both imagined an Ernest in their minds and no other man will do, both have said the name inspires confidence. Wilde is making a statement to society that women should not be treated in this manner and they should be treated as equals to men, which during the 1900’s a movement towards equality started.

Wilde portrays women in his play “The Importance of Being Earnest” in many lights; a strong authority figure in Lady Bracknell, who dominates the men and women in her life. Gwendolen who is the helpless sort-sighted city girl,
who has imagined a life outside her own and the same can be said for Cecily from the country. Wilde showed that Cecily and Gwendolen lacked an identity and that is because they have lived no life to contribute to giving them one. The irony to their lack of identity is they both imagined and loved a man who only had a name and no identity as well, Ernest.

Women in “The Importance of Being Earnest”. (2016, Jun 20). Retrieved from https://studymoose.com/women-in-the-importance-of-being-earnest-essay 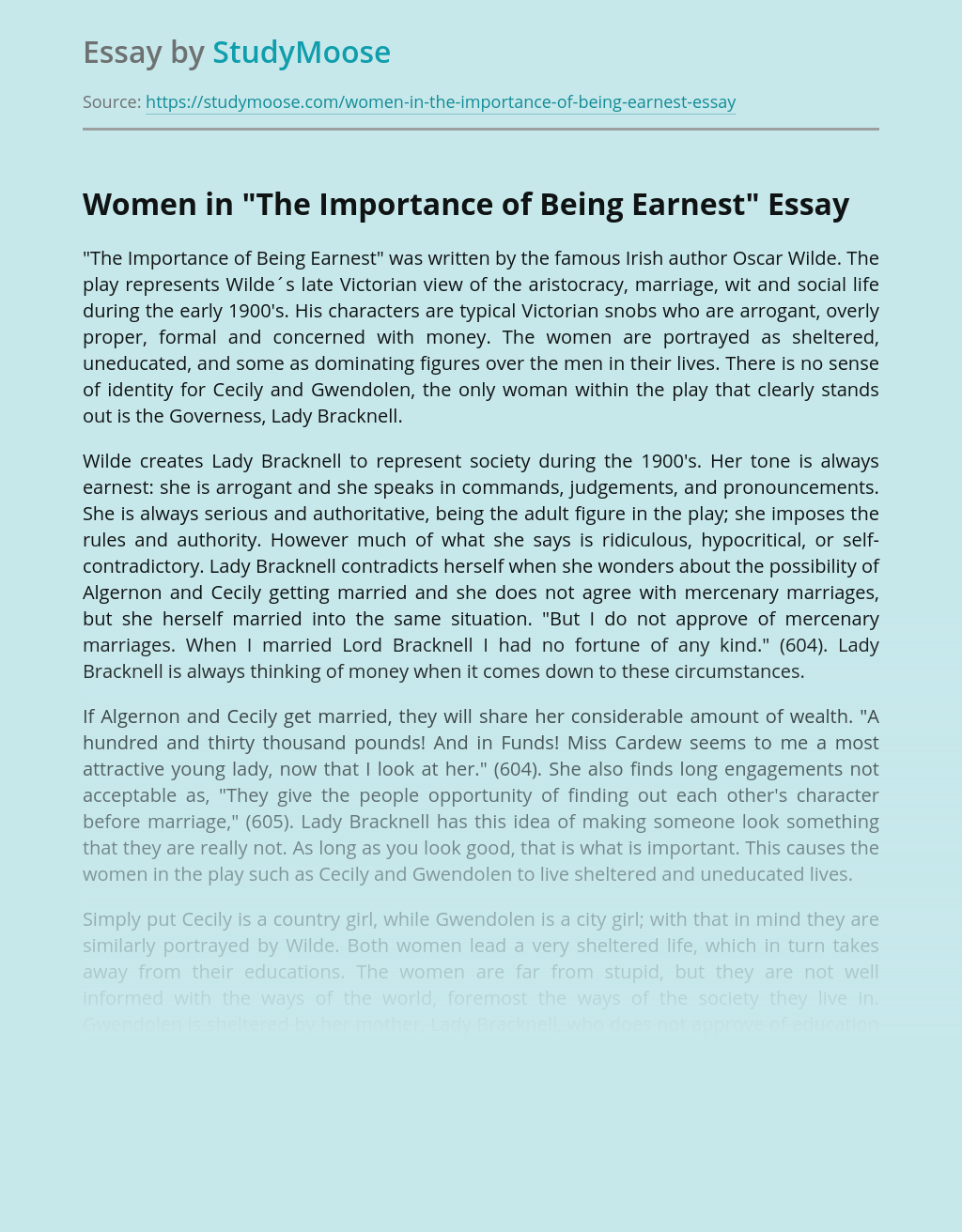 Sorry for Disturbing You

Life is about many things. Some would say friendship is gold, others that money talks. But one main thing that many people isn’t listing that high, is communication. We have the ability to talk and express what we feel. That can be the key to loving relationships and a happy life, if handled correctly. But...

To Kill a Mockingbird Literary Response: Is Atticus a Good Parent

I do not agree with the statement and i think that Attticus is not “total failure as a parent”. Although he is not the perfect role model parent, he is very responsible and easily gained the trust of Jem and Scout, something essential in every parent-child relationship. Also, even though he is a single parent,...

Get Essay
The Kite Runner & Escape to Afghanistan

The transition from adulthood to childhood is certainly not a simple adjustment. Coming of age presents many challenging decisions, overwhelming pressures, and emotions that can be very difficult for adolescents to overcome. In the excerpts that we studied, The Kite Runner by Khaled Hosseini and Escape to Afghanistan by Farah Ahmedi, the stories of two...

Percy Jackson and the Lightning Theif

Percy Jackson and the Lightning Thief is an amazing book (in my opinion) that was created by Rick Riordan. I enjoyed this book a lot because of all the detain that Mr. Riordan had put into the book and with all of the facts about Ancient Greek myths, I picked it out in the first...

This chapter views the relationship of the current project study in connection to the previous related researchers and literatures. Understanding the associated studies both foreign and local, and the concept of other components related to the current project study will clearly show where the proponents got their concepts and ideas. It clearly establishes the empirical...