Brave New World, by Aldous Huxley, breaks through the tradition based social norms of the 1930s by providing a sex obsessed, drug abusing, feel-good utopia of the World State, centered around control. In a world separated by physical attributes, Bernard Marx, a natural outcast due to his short and unattractive physique, is placed in the upper class known as Alphas. Despite his high class, Bernard finds himself deviating from societal expectations, yet attempting everything possible to become accepted. The main reason for Bernard’s isolation is his unattractive physique despite his high class.

Don't use plagiarized sources. Get your custom essay on
“ Utopia in “Brave New World” by Aldous Huxley ”
Get custom paper
NEW! smart matching with writer

A supposed-to-be alpha, has been noted as “so ugly” and small (Huxley 47). Alphas are described as “powerfully built, deep-chested, and agile” looking class so, naturally, Bernard’s lack of physical attractiveness causes him to feel a sense of isolation from society. He defects so much from the norm, Fanny and Lenina had a theory he had alcohol put into his embryo by mistake, signifying he isn’t worthy of the upper class (Huxley 47).

His defection in this aspect is completely out of his control because societal norms simply prescribe people who look and act like him are different and inferior from the rest of the group.

For example, when people are conditioned for their class, they are told, through hypnopedia, that their class is superior than others in ways as simple as the color of the other classes’ clothes (Huxley 27). Despite stemming from an anti-Marxist view of “false consciousness,” having the different levels of castes lends itself to an analysis correlating around Marxism” (NewYorkEssays 1).

Nevertheless, these deep-rooted ideals cause Bernard’s peers to almost unconsciously disassociate with him. In being naturally isolated, Bernard finds himself becoming capable of independent thought furthering his defection from the societal trends of conformity and happiness (Huxley 67). The feelings of isolation through class assignment and grouping of people, as seen in Marxist Theory, have caused Bernard to become a social outcast, almost oppressed by his peers. These themes are not only prevalent in the novel, but throughout day to day life. Henceforth, As Bernard becomes aware of his inferiorities, he tries to force conformity but when that fails, he goes to extremes to become one with society.

Bernard, since the beginning of the novel has been noted as being capable of independent thought, further isolating him from society. For example, in the World State, people are expected to have casual sexual encounters with many partners. However, Bernard, unlike his colleagues, notices and takes distaste to Lenina being chased after by men like a “piece of meat” (Huxley 39). Bernard does, in fact, find his friend Hemholtz also shares with him “the knowledge that they were individuals,” (Huxley 67). While this may look as if it would give Bernard someone to lean on for inclusion, it does just the opposite. Hemholtz, an attractive stereotypical alpha, feels disillusionment with the societal demands upon him: sleeping around, having multiple partners (Huxley 68-69). Bernard, in listening to his friend’s disillusionment feels jealous he isn’t experiencing the societal norms wishing “he could have as many girls as Hemholtz,” therein deepening the sense of isolationism Bernard feels (Huxley 68). The isolation continues during the orgy scene; Bernard fails to fall into the trance, hyper focusing on Morgana’s “eyebrow” (Huxley 81). Bernard focusing in on the eyebrow is Huxley’s way of showing how isolated Bernard really is. Any other person in this society would disregard her eyebrow and see her as an object for sex, but not Bernard. He is too aware of his situation yet too conscious of his need to conform, further showing the Marxist theme of societal pressure and class structure. Therefore, while all the other people are around him screaming in ecstasy while Bernard watches on, faking the trance to feel included (Huxley 83). His attempt to become one with the group fits into Marxist theory perfectly where class inclusion is central in society. Lying, saying the orgy was “wonderful,” Bernard becomes more “himself than ever before in his life” (Huxley 86). The depression outlined shows how deeply Bernard wishes to be a part of the society, deepening the underlying Marxist themes of societal inclusion and class systems. 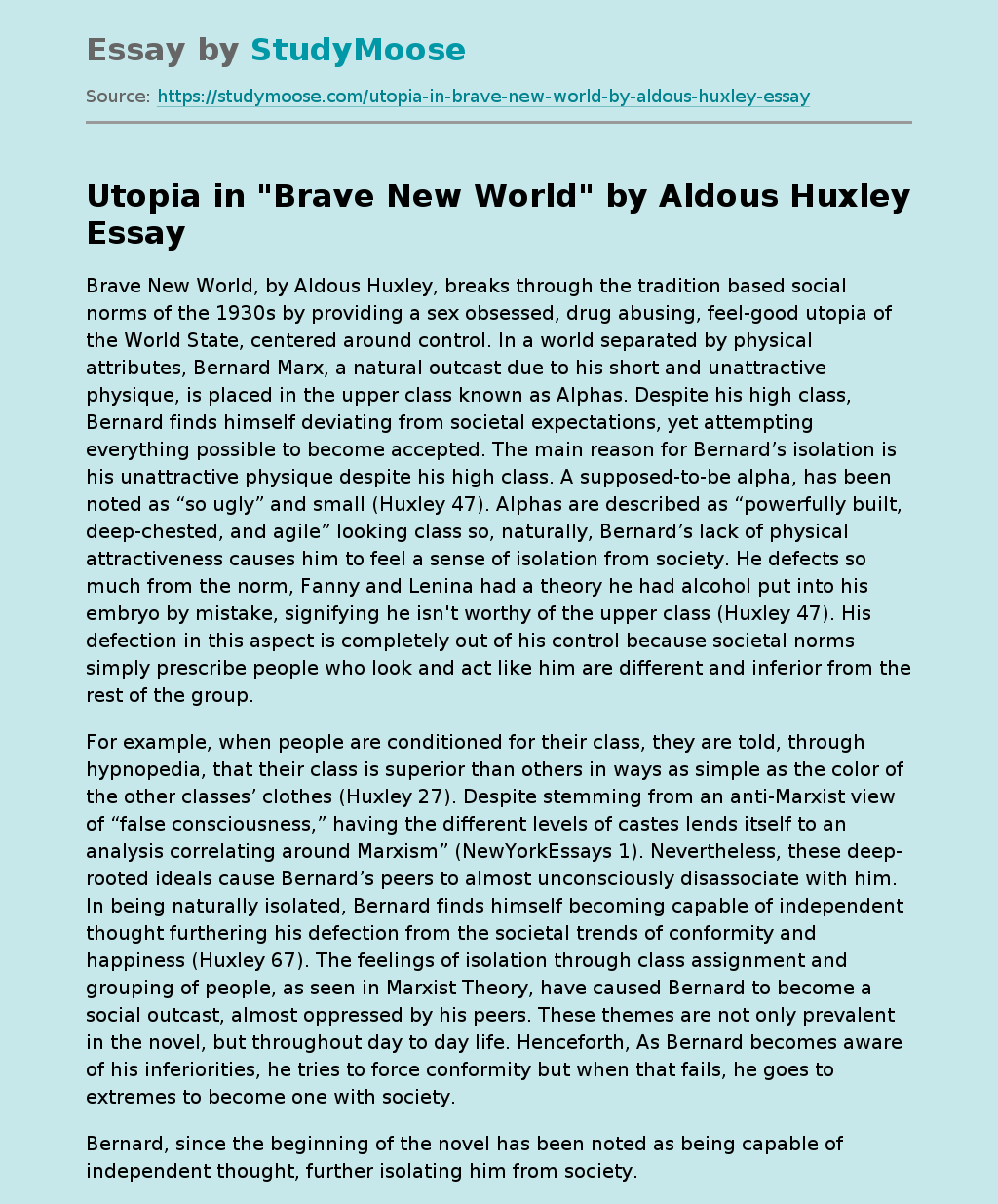