Universal Healthcare: Why We Need It Now

As citizens of the United States of America, we enjoy many rights, freedoms and free services such as public education, public law enforcement and public safety services. We take pride in having a developed nation, however a basic human right is missing from the list: free public healthcare. Since the United States is one of the wealthiest nations in the world, should we not expect medical care to be provided to its citizens? Imagine the positive affects that would result from nationally available healthcare – the list is long.

Don't use plagiarized sources. Get your custom essay on
“ Universal Healthcare: Why We Need It Now ”
Get custom paper
NEW! smart matching with writer

According to the 2012, US Census Bureau, 47.9 million people are without health insurance in America; Healthcare and health insurance have become so expensive and out of reach, that many families cannot receive the medical care they need. The best solution to this pressing issue is to add a twenty-eighth amendment to the Constitution, which ensures the right of universal healthcare to all Americans.

Healthcare is a basic human right and need that should be protected by the Constitution.

The government and the Constitution must fulfill their responsibility of “promoting the general welfare” of its people, as stated in the Preamble. Also, it is stated in the Declaration of Independence that citizens shall enjoy the right of “life, liberty and the pursuit of happiness (Source 1).” Healthcare falls under that category, as our health is crucial to our well being, “dictates our quality of life (Source 2)” and controls our ability to enjoy such fundamental rights. Therefore, universal healthcare is a legitimate function of our government. In addition, the United States is one of the only developed nations in the world that remains without free health services.

We may benefit from taking a lesson from other countries that have already taken these steps, such as our neighbor Canada. In Canada, life-long health coverage is ensured to everyone and it costs around “half as much, per person, as in the United States (Source 3).” In fact, according to the World Health Organization’s report in 2000, the US ranked thirty-seventh in terms of the world’s healthcare systems-

disappointing considering the amount of wealth in the US (Source 4). It is time for our government to catch up with the rest of the developed world, and provide its citizens with free health services.

If the U.S were to institute a policy of free healthcare there would be many positive results, both long term effects and immediate results. Promptly, we would see many citizens gain previously unavailable access to medical care, which can save countless lives and improve the overall health of the public. It’s 2014 and deaths associated with a lack of health insurance should no longer be acceptable. According to a study conducted by the American Journal of Public Health, 45,000 deaths occur every year in the U.S, that are linked to a lack of health coverage (Source 5); Creating free health insurance could potentially save 225,000 lives within the first five years of its adoption. If the sheer amount of lives saved is not convincing enough, consider the economic benefit and and saved money that may result. When the public is healthy and happy, they won’t miss work, thus contributing more to the economy and decreasing unemployment. A study conducted by the Institute of Medicine reports that the United States “loses $65- $130 billion as a result of diminished worker productivity, due to poor health and premature deaths, among the uninsured (Source 1).” Additionally, families all too often go bankrupt as a result of medical bills.

In fact, in 2007, sixty-seven percent of American bankruptcies were related to medical expenses (Source 1), so universal health coverage would dramatically decrease such occurrences and allow the American public to live healthy and productive lives. It would also promote small and private businesses, as they would not have to pay for employee health insurance any longer, and more often than not, Americans are insured by their employer. However the most significant long term and economic effect free health coverage would bring to the U.S is an actual decrease in the amount of money spent on healthcare. While many would believe that universal healthcare is costly and out of reach, a study conducted in 2013 suggests that, “under a single-payer system, in which all citizens are guaranteed a right to health care, total public and private health care spending could be lowered by $592 billion in 2014 and up to $1.8 trillion over the next decade due to lowered administrative and prescription drug costs.” (Source 6) If this plan were to be instituted, it would not only help society and out people, it would also improve the economy and ultimately decrease government spending.

With all of these potential benefits and success stories of other countries, one might wonder why we have not taken action to promote such policies in America. Unfortunately, the answer lies in the large corporations that control the medical industry. Established health providers and facilities fear they will lose their money if health coverage is provided by the government; This makes the proposal less likely to be adopted by the states. However, we can go around these corporations and instead gain support from the people. In order to gain credibility and momentum, first we can utilize the media and internet, and begin to educate people of the benefits of a free healthcare system. Once the majority of people are made aware of the current deficits in our healthcare system, we can hope the people will no longer accept it. Then, with the support of the nation’s public we will take the proposed twenty-eighth amendment to Congress where it would need ratification by two thirds of both the House of Representatives and the Senate.

In conclusion, the time has come for the United States to follow in the rest of the developed world’s footsteps and provide universal healthcare for its people. This should become the twenty-eighth amendment to the Constitution as it will not only improve public health, but better the economy and foster a just society in which everyone can receive medical care.

Universal Healthcare: Why We Need It Now. (2016, May 10). Retrieved from https://studymoose.com/universal-healthcare-why-we-need-it-now-essay 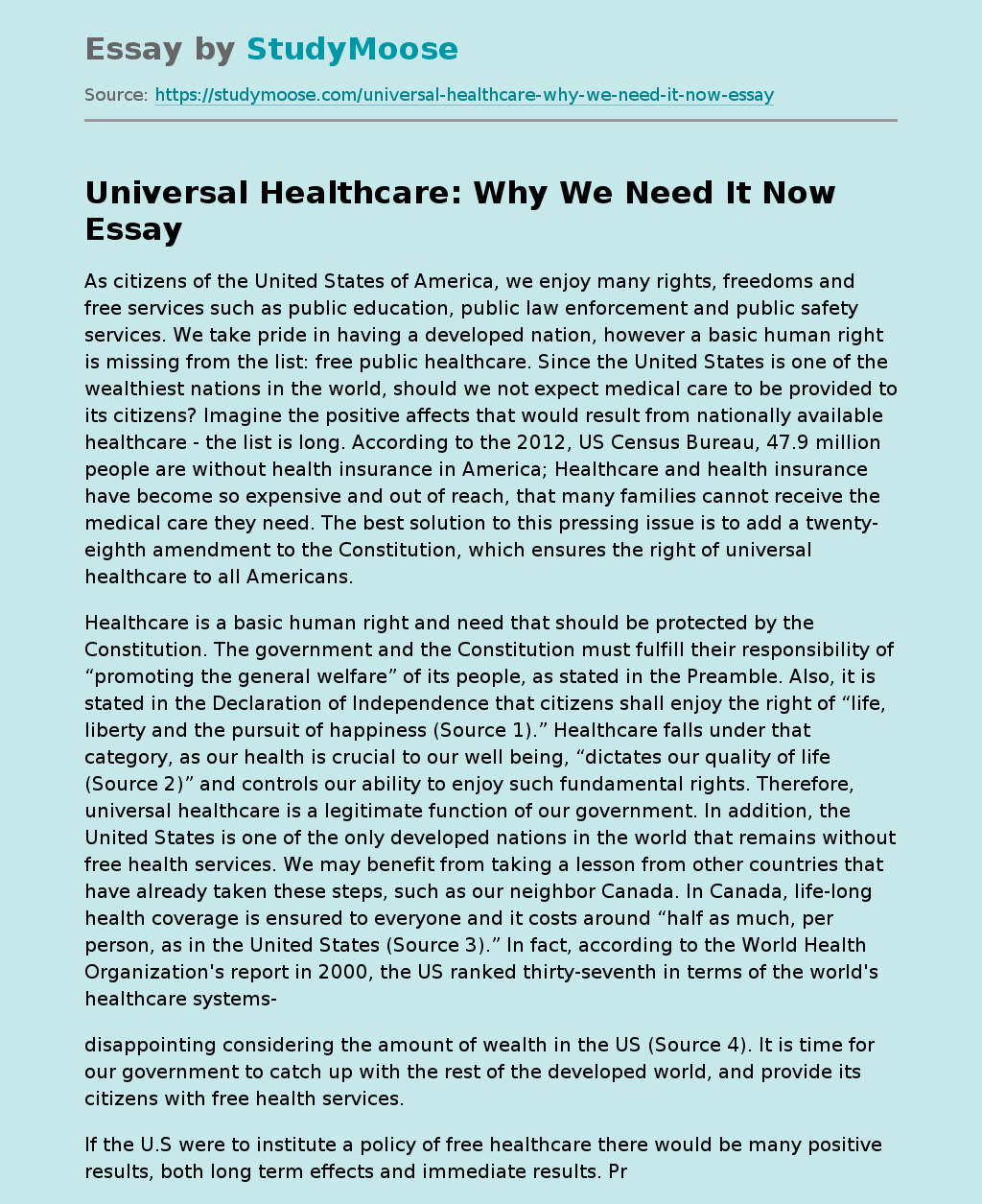