Metabolism refers to the chemical reaction collections that take place in the cells of the body. The process of metabolism converts the body nutrients derived from food ingested to produce essential energy requirements for the body. The body requires energy for muscular activity and movements as well as blood circulation, breathing, making new cells, lymph, and tissue fluid transmission of nerve impulses and repair of body tissues among other roles. The control of metabolic chemical reactions in the body is done by specific proteins.

Don't use plagiarized sources. Get your custom essay on
“ Understanding human anatomy and physiology ”
Get custom paper
NEW! smart matching with writer

The cardiovascular, digestive and respiratory systems work together in the body that leads to energy supply. The paper describes the digestive, cardiovascular and respiratory system in their relation to energy metabolism and their role in providing energy o the body. Furthermore, this paper provides a robust discussion of the various roles of energy in the human body.

Lastly, it analyses the interaction of two body systems to produce the energy assisted body functions.

The digestive system primarily breaks down the food components with fluid into tiny nutrients that can be absorbed to generate energy. The digestive system functions begin during ingestion to digestion, absorption, and finally to defection. The system consists of a group of organ is responsible for breaking down the chemical food components using the digestive juices. The digestive system, according to Favors (2010, para. 7), refers to a group of organs consisting of the esophagus, mouth, pharynx, gall bladder, stomach, liver, and colon that aid in ingestion, digestion, absorption and defection for both mechanically and chemically (Favors (2010, para. 9). The digestive system connects with the digestive and respiratory system in that in the process of inhalation, and air is filled with the lungs. The circulatory system runs all over the human body including the lungs. Likewise, the hemoglobin proteins present in the bloodstream pick up the oxygen from the lungs and the oxygenated blood in complex compound called oxyhemoglobin dumps off the oxygen to all parts of the body with assist of the heart (Caseley, Hall & Thames Science Center 1993, p. 97). In the digestive system, the small intestine folds up to provide more surface area to absorb more food nutrients. The villi responsible for absorption has bloodstream running through them that transports the nutrients to the entire body via the circulatory system. Therefore, the digestive system provides the diaphragm with nutrients to facilitate breathing through cellular respiration.

The cardiovascular system purposefully circulates oxygen and nutrients to the body cells. The system incorporates of the blood vessels, heart, blood, and lymphatic system. The circulatory system also transports waste products such as carbon dioxide to the lungs for exhalation (Favors, L. (2010, para. 12). The respiratory system maintains supply of oxygen and aid removal of carbon dioxide and water. Therefore, the respiratory system exhibits both internal and external respiration that carried out in the body cells and gaseous exchange respectively. In the lungs, the alveoli allow for diffusion of carbon dioxide out of the blood stream and oxygen into the bloodstream. Therefore, this circular process allows cardiovascular and respiratory systems to work together to transfer nutrients. Internal respiration provides cell with energy to perform its daily functions. The energy requirements of the body mainly come from fats and carbohydrates ingested as food. The carbohydrates are decayed into glucose, which is soluble in the blood. The circulatory system transports glucose to all body parts where it reacts with oxygen produced by the respiratory system in a series of steps to produce water, carbon dioxide, and energy.C6H12O6 +6O2 ——————->6CO2 +6H2O +EnergyGlucose + Oxygen ——————->Carbon dioxide + water + energy

[Tortora & Grabowski, 2003, p. 13).The burning digested and absorbed of food in the body cells produces energy and the byproducts; water and carbon dioxide formed during respiration are transported through the circulatory system to various organs of the body while the energy released fulfills the energy demands of the boy. During the process of cellular respiration, the sugars are broken down to glucose and water with release of energy (ATP) used for cellular work.C6H12O6 + 6O2 ——————-> 6CO2 + 6H2O + ~38 ATPThe process of cellular respiration occurs in the cytoplasm and partly in the mitochondria and can be divided into four stages. Firstly, is glycolysis that occurs in the cytoplasm where one glucose molecule is broken into two molecules of pyruvic acid leading to the production of 2 ATPs. Secondly, is the transition reaction where pyruvic acid is shuttled into mitochondria and conveyed to Acetyl-CoA for further breakdown. Thirdly is the Krebs Cycle where hydrogen is stripped off the Acetyl-CoA to extract electrons for making ATP with CO2 and H2O as by-products. Lastly, is the electron transport chain that occurs in the cristae where electrons from the hydrogen are carried by NADH via the electron transport chain leading to the production of 32 ATPs (Anon 2010, p. 139).

The Role of Energy in the Body

Energy required to power the metabolic processes of the body is derived from food ingested. The food undergoes various catabolic reaction pathways to release the energy and store in high-energy phosphate bonds, ATP. Adenosine triphosphate (ATP) provides usable energy in the body. It converts the energy in foods to energy the body cells can use to promote body functions. The living cells cannot function without energy. Bailey and Rowland (2008, p. 4-5) writes that to release the energy from glucose, the respiratory supplies oxygen to the cells to facilitate cell respiration. Besides, the rate at which glucose is used is dependent on the metabolism (B.M.R) of an individual. The muscles use energy to enable movement; however, contraction of the muscle tissue requires oxygen and glucose. Furthermore, human beings are warm blooded mammals, thus can only digest food and function at a given body temperature, and energy is required to maintain this body temperature. Also, the movement of the muscles that generates motion can only work at warm temperatures indicating the significance of energy in the body. The coldblooded humans utilize the energy from the environment and food.

Lerner (2004, p. 12) defines energy as the capacity to do work in the body. As such, all the functions of the body that supports growth and life in overall require energy. Particularly, pumping the ions across the membranes making new lipids, proteins hormones, neural function, making new cells contracting muscles, absorbing nutrients, repairing of damaged or replacing worn tissues, pumping blood, and excreting waste requires energy (Lerner 2004, p. 12). Therefore, food plays a fundamental role in the supply of energy mostly from fats, proteins, and carbohydrates. Fats contain nine calories per gram of energy and are the most concentrated source of energy, carbohydrate, and protein both contains four calories per gram. An individual’s energy requirements are mainly categorized into two parts: energy required for activity and basal metabolic rate Lerner (2004, p. 14). Basal metabolic rate mentions the heat eliminated by the body at rest at normal temperature. The average calories per day for basal metabolic rate ranges from 2, 000-2, 400 calories, however, an individual working requires up to 6, 000 Calories daily.The body and the cells require the energy to perform mechanical work such as movement of the cell and the body itself, for instance, muscular contraction. Also, muscular transport requires the use of energy. According to Lerner (2004, p. 14-15) the movement of molecules from a region of low to the high concentration (active transport) requires energy because it is opposite the normal movement. The body electrical works under molecular transport require energy because the establishment of ion differential concentration across membrane is required for electrical exchange. Electrical work is essential for conduction and excitation of impulses in muscle and nerves cells. Finally, energy is essential for complex biochemical synthesis that involves the formation of new molecules from simpler molecules Lerner (2004, p. 19).

How Body Systems relate to performing their functions

The production of energy to perform various body functions requires the body systems to work together. For instance, energy is used for mechanical movement. The skeletal system and the muscular system are responsible for the bodily movements. However, to execute this, they require energy. Therefore, the digestive function performs the role of mechanical and chemical breakdown of food to produce energy. Within the small intestines, the villi are surrounded by blood vessels that transport the absorbed nutrients to the muscle cell that uses the energy in the form of ATP to produce movement. In the process, the digestive system, the respiratory system and has to work together to produce movement of the muscles (Matthew 2010, p. 123). The digestive system thus provides the heart with nutrients to keep pumping nutrient and oxygen to the muscle cell that in turn produces the movement. The relationship is symbiotic as each of the systems benefits from one another’s role (Matthew 2010, p. 128).

Favors, L. (2010). Function of digestive organs within the cardiovascular system 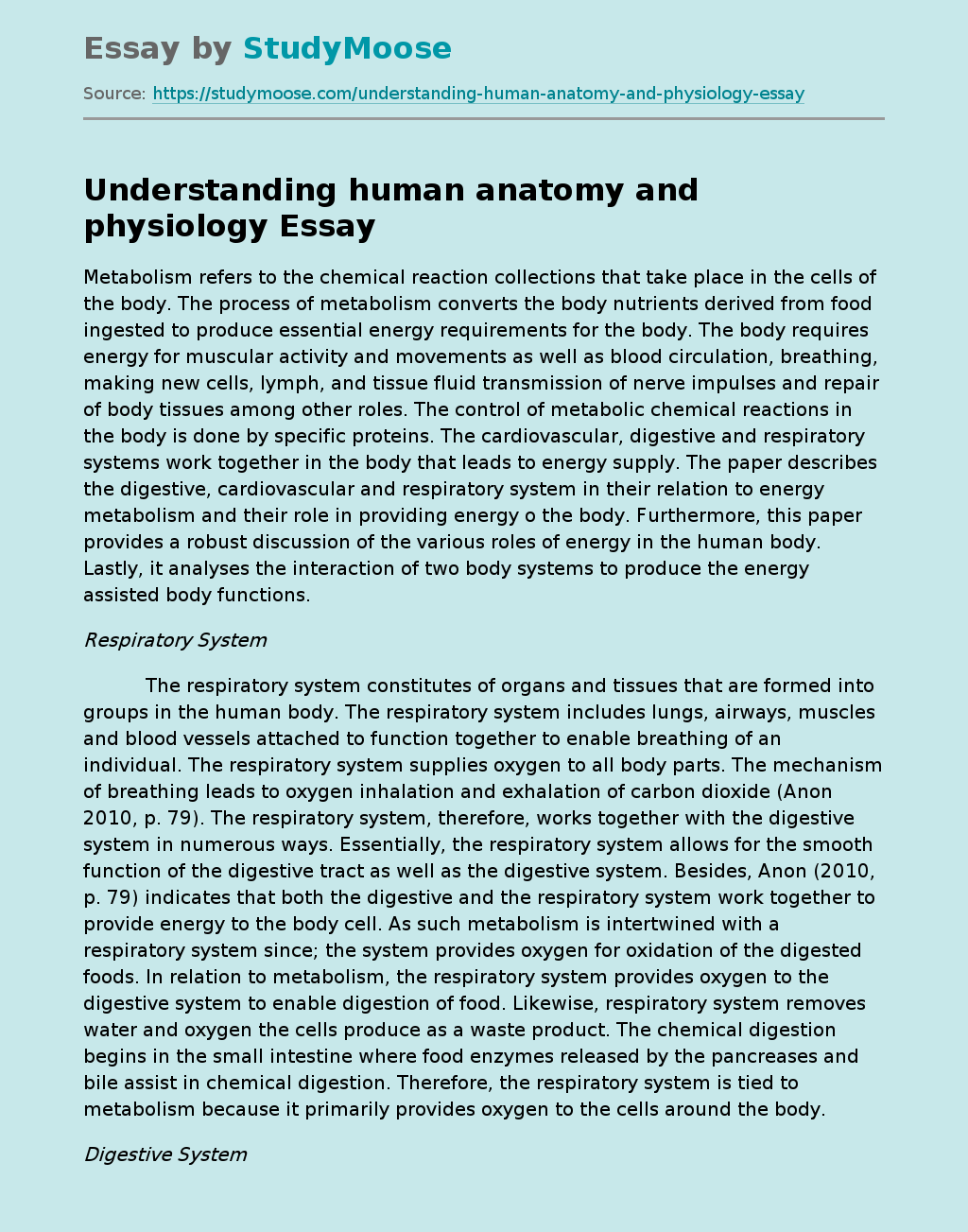