‘Underground to Canada’ by Barbara Smucker is a captivating novel which tells the story of Julilly and Liza and their journey to Canada. The following essay will show how Smucker uses themes such as courage and determination to make the novel’s two central characters (Julilly and Liza) show remarkable feats of courage to escape from slavery and make a new life for themselves in Canada.

At the beginning of the novel Julilly and Mammy Sally are slaves in the Henson plantation alongside Adam, Ben, Lester and James.

Don't use plagiarized sources. Get your custom essay on
“ Underground to Canada ”
Get custom paper
NEW! smart matching with writer

They worked very hard as slaves. They were slaves in the Deep South. Sims usually chained the slaves and they worked night and day. In the middle section the story develops when the riley plantation is a harsh place. Julilly worked in the cotton fields in the blazing heat if they go to slow Sims will whip them. Mr Ross plans to escape plan for Julilly. They have to dress in boys clothes.

The woman cut there head with scissors. Julilly is on the run to Canada. The story develops near the end when Julilly and Liza move from ‘Safe House’ to ‘Safe House’ before finally escaping to Canada. They are helped along the way by some kind Quaker people

The main themes highlighted in this novel are slavery, cruelty and courage. Barbara Smucker brings the story to life when she addresses these themes. Examples of these are addressed throughout the novel e.g. when Sims bullies the slaves.

For example, he shouts: “You field-hand niggers. Line yourselves up along this path and don’t you loiter.” Then the sound of a zinging whip cut the air and Sims screamed: “Some of you ain’t gonna chop no cotton today.”

That shows a good example of Sims cruelty and how he views slavery. Julilly is very brave to escape from the Riley Plantation.

In conclusion, it is easy to see that in her novel ‘Underground to Canada’; Barbara Smucker has used a number of themes to highlight the African American slaves had to endure not that long ago. Its message is important today as racism is still prevalent in many so-called civilised countries. The themes in her novel have a message for all of mankind. 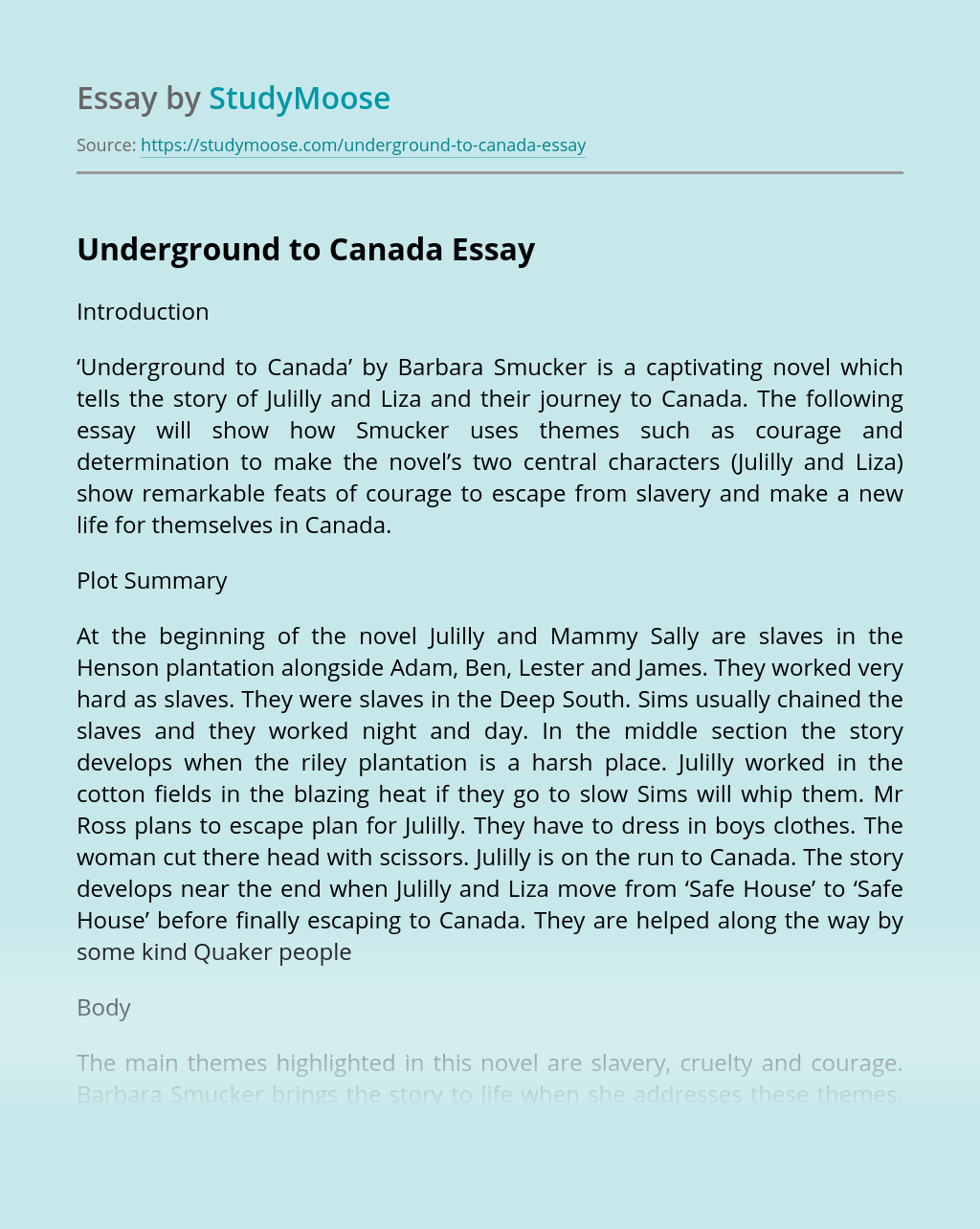