Canada is a very interesting country, mainly due to its diversity. The weather in Canada can be both freezing and very hot. Some land is rocky and mountainous, while other places are composed of flat, rolling hills. And in Canada, you can find many different races, from Asian to Latin, African to Indian. Canada is the most multicultural country in the world, and a lot of Canada’s development and success can be attributed to immigrants coming into Canada (Samuda, 1984). Yet not all people agree that multiculturalism has had only positive effects on Canada.

Canada was the very first country in the world to introduce a multicultural policy (Satzewich, 1992). In 1969, the Royal Commission on Bilingualism and Biculturalism heard many ethnic spokespersons argue that Canada should adopt the idea of a “cultural mosaic”, where different cultures would each contribute to Canada, making the country unified through each culture’s uniqueness.

This was a different concept than the United

States idea of a “melting pot”, where there would be many different cultures, yet they would all have “American values”, which would be the main factor that united them as a country. The Royal Commission agreed with this proposed policy, and presented it to the Government of Canada. Two years later, the policy was accepted while Pierre Elliot Trudeau was Prime Minister.

In 1982, the policy became law, which helped to settle any racial and ethnic problems (Satzewich, 1992).

In 1997, the Department of Canadian Heritage restructured the federal Multicultural Program. The renewed program worked towards three main goals: identity – fostering a society in which people of all backgrounds feel a sense of belonging and attachment to Canada; civic participation – developing citizens who are actively involved in shaping the future of their various communities and their country; social justice – building a nation that ensures fair and equitable treatment and that respects and accommodates people of all origins (Internet Site, http://www.communication.gc.ca/facts/multi_e.html).

The Multicultural Policy in Canada states that all people are equal, and can participate as a member of society, regardless of racial, cultural, ethnic, or religious background. Multiculturalism strives to preserve people’s cultural identity, while at the same time ensuring that common Canadian values are upheld (Reitz, 1980). Canada’s policy on immigration has changed over the years, reflecting societal views and economical conditions. Yet no matter how much the policy changed, the effects of this policy are

very evident. Close to 10% of the adult population of Canada are visible minorities, and this amount is expected to double within the next twenty years (Satzewich, 1992). Visible minorities are “persons, other than Aboriginal peoples, who are non-Caucasian in race or non-white in colour” (Employment and Immigration Canada, 1987). This means that the immigrants coming into Canada are not only from European descent; rather, they are coming from other continents, such as Africa, South America, and Asia.

Many will argue that Canada would be better off without its lenient attitude towards immigration and multiculturalism. There are several negative factors that are attributed to Canada’s multicultural policy. One of the main reasons why people believe that Canada’s multicultural policy does more harm than good is because it creates racism. By putting many different races together, all of which have different cultural and value differences, acts of discrimination and racism are bound to occur. Also, some immigrants bring with them histories of conflict in their home countries to Canada, which leads to problems that could include violence, hatred, and discrimination (Bibby, 1990). Rather than unite Canadians, these factors would only divide Canadian society.

Another main reason as to why some people view multiculturalism in Canada negatively is because it creates confusion and misunderstanding. Many people that come to Canada know only their native tongue, and their own countries rules and laws. Being introduced to Canadian laws, language and customs can prove to be quite the challenge. A third reason as to why not everyone supports multiculturalism is because of the fear of eroding traditional British heritage. Canada has close ties to its mother-nation Britain, and many believe that by allowing immigrants of different ethnic backgrounds into the country, the link between Canada and Britain will only weaken (Satzewich, 1992).

These are all examples of downsides to Canadian multiculturalism, yet there are many benefits that result from multiculturalism as well. The benefits of multiculturalism in Canada make up for the drawbacks. One of the downsides to multiculturalism was that it leads to racism. However, one of the positive effects of Canada’s policy is that there is, over time, less racism. This is due to the fact that once many different ethnic groups have been living with each other for some time, they begin to understand each other more, and therefore feel closer and more connected to each other (Samuda, 1984). This results in less racism and prejudice towards one another.

Another positive effect is that since there are many different cultures living with each other, people will benefit because they will learn more about different races, and will develop a greater understanding of the cultures around them (Samuda, 1984). For instance, a Hindu who only knows his own religion and way of life will see the way that other races live, and therefore his knowledge about other religions, countries, values, etc. will grow. This in turn allows the Hindu to have more freedom, because he now sees other ways of living, and can choose however he wants to live. This is a very important aspect of Canadian society: the ability to live freely, and to choose whatever religion and way of life you want.

Another positive effect that multiculturalism has had on Canada is that Canada is now a country so diverse and so rich in culture, that there are now vast amounts of ideas, opinions, and lifestyles to explore. Without multiculturalism, Canada would not be so rich in art and cultural traditions (Samuda, 1984).

All of the above benefits that multiculturalism has had on Canadian society are important, yet the main positive effect that multiculturalism has had on Canada is that it has basically shaped Canada into the country that we now know it as today. Without Canada’s multicultural policy, not very many immigrants would be coming to Canada. And without immigrants, Canada’s population would be very small, and its economy weak. Immigrants that come to Canada are beneficial to Canadian society because: they pay taxes, create jobs, and they add to Canada’s economy, among other things. Immigration into Canada is the main reason as to why Canada has become a successful country (Reitz, 1980).

Evidently, Canada has benefited from its multicultural policies, in particular its policies towards immigration. However, what is society’s attitude towards immigration? Back in the early 1900’s, foreigner’s were mostly seen as inferior. They were not treated the same as white people were (Bibby, 1990). So the question that should be asked is why were so many immigrants even allowed into Canada, if they were not wanted there? They were allowed to come simply because Canada needed workers. An easy solution to the increasing demands for labourers in Canada was to allow immigrants to come into the country to work (Bibby, 1990). After a few decades, these immigrants had contributed a large amount of their time, work, and money to Canada, and their efforts were not left unrecognized. This was around the time when Canada’s Multicultural Policy was composed, and later put into effect.

Attitudes towards multiculturalism and immigration in Canada changed significantly while Canada’s economy was expanding after World War II. Canada needed workers, and many flocked into Canada, only this time, not all were labourers. Many were professors and well-educated people, whom were fleeing their home country, coming to Canada as refugees (Satzewich, 1992). Over the next few years, Canadian

attitudes towards multiculturalism became more welcoming, while the last racial and ethnic barriers to Canadian immigration were removed. With immigrants mainly moving into large cities in Canada such as Toronto, Vancouver and Montreal, cultural diversity was becoming increasingly evident in these major urban areas (Satzewich, 1992). Most immigrants moved into large cities because of two reasons: work was easier to find, and other people of the same ethnic background as them would be living there as well. Today, 90% of foreign-born Canadians live in one of Canada’s fifteen largest urban centers (Reitz, 1980).

Over the years, attitudes towards multiculturalism and immigration have changed, with many people now recognizing the benefits of a multicultural society. People are now looking towards the future, trying to see what effects multiculturalism will have on society within the next few decades. Of course, Canada’s policies towards immigration and multiculturalism will be affected by changes in social values and the economy over the next few decades. Throughout history, it is evident that immigration into Canada becomes more open and welcome when there is a need for a larger labour force (Bibby, 1990). No matter what policy is put into effect, one thing remains clear: the more Canadian society becomes culturally and racially mixed, the greater the need for tolerance and acceptance for one another as fellow Canadians. A multicultural policy that meets the needs of both long-time residents and the newly arrived will prove to be the most successful policy (Samuda, 1984).

After reviewing this information about multiculturalism in Canada, one can clearly see that multiculturalism is an important aspect of Canadian society, and society has benefited immensely due to Canada’s policies towards immigration and multiculturalism. While there will always be negative opinions towards multiculturalism in Canada, the majority of Canadians recognize the importance of Canada’s multicultural policies, and support them in their entirety (Bibby, 1990). Because Canada’s population is composed of so many different racial backgrounds, the future of Canada depends on the commitments of all its citizens to a strong and unified Canadian identity, while still keeping their own culture and unique way of life. As it does so presently and as it has done so in the past, multiculturalism will continue to benefit Canadian society, making the quality of life better and more fulfilling to all Canadians. 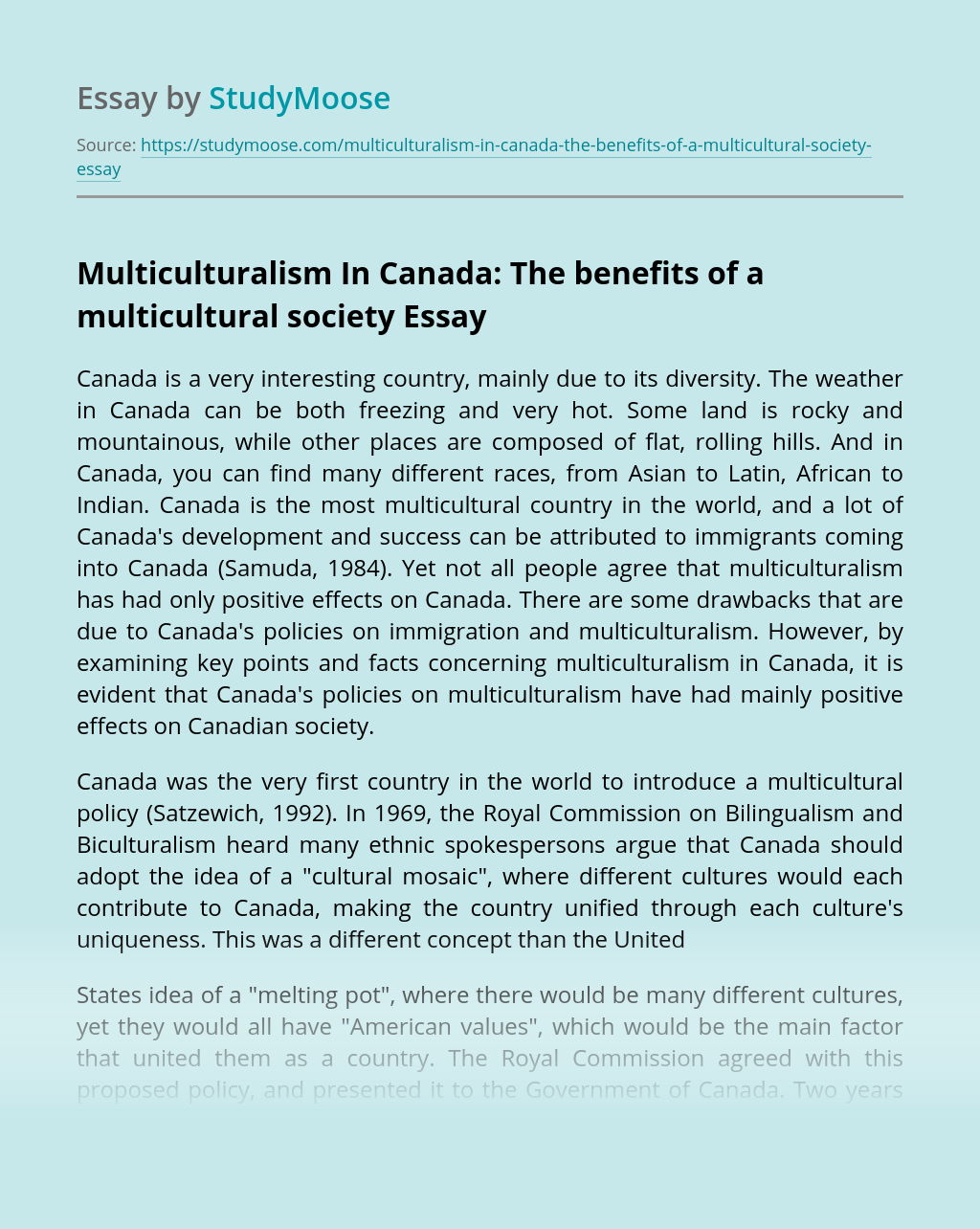