''Under the Influence'' by Scott Russell Sanders

“Under the Influence” this essay written by Scott Russell Sanders is written about his father and his father’s struggle with alcoholism. This essay shows how alcoholism affects Scott Sanders, his brothers, his sister, his mother and even his own children. It is a detailed explanation on the effects of alcohol on his father and how you can literally see how each beer, wine glass, shot, or swig can transforms him.

In this writing Scott Sanders uses many sources to explain how he viewed his father when he was drunk.

Don't use plagiarized sources. Get your custom essay on
“ ”Under the Influence” by Scott Russell Sanders ”
Get custom paper
NEW! smart matching with writer

He takes use of dictionaries, medical encyclopedias, poems, short stories and the bible. Using these sources he was able to give readers a more vivid a deeper view into how the victims of alcoholism. He used this one story from the bible about a lunatic and a swine. Story goes Jesus crossed the ocean and when he came off his boat a lunatic in this grave yard came charging up stark naked and filthy.

The lunatic was frothing from his mouth so violently that he broke the strongest chains. This madman for years avoided by society stayed in the graveyard and he day after day bruised and cut himself with stones. Jesus saw clearly he was possessed by demons. Jesus banished the demons into the swine and the pigs jumped off the cliff and Jesus “restored the man into his right mind”. Scott Sanders compares this lunatic to his father, he goes to tell how the liquor is like the demons and he is possessed by them when he is drunk but when sober he is in his “right mind”.

Using different sources like the dictionary or in this case the bible helps readers think of alcoholics in different ways and gives a more vivid description on his drunken father.

The final three paragraphs are very important to the essay without them you wouldn’t be able to see the effects that his father being an alcoholic had on him and his children. In these final three paragraphs you see how he ended up like his father in some ways. When he was younger he felt that his father’s drinking was his fault, he thought he drank because he disappointed him in some ways. So Sanders worked very hard to try to get rid of the disappointment getting good grades, winning basketball games and more. This carried on to his life as an adult now he is in some ways a workaholic, consumed by work the same way his father was consumed by liquor. He even goes to say “… my own son, at the age of ten…. He tells me that when I am gripped by sadness he feels responsible….” This is the same way he felt when his father was gripped by alcohol. He and his father are both the same in the end one addicted to liquor the other addicted to work.

Addictions affect everyone whether the persons think so or not. A friend of mine was addicted to meth to the point it consumed his whole being just like Scott sanders father was consumed. My friend got to the point where he was still from his own friends and family just to get money to feed his addiction. To the point he stole his mother’s debit card and slowly over time ended up using all the money she had. With that his mother lost everything her savings and her son from going to sleep high and choking on his own vomit. Just like Scott’s father his addiction killed him and affected his family in ways I am sure he didn’t want.

Scott Sanders essay helps readers see addictions in a new light and helps readers view it in many different ways. Ways like thee connection between addiction and demons, or how he connected his father’s drinking problem to a waltz. If he try to waltz with a drunk man it is a lot harder because you have to hold him up and deal with him tripping over himself and his reeking breath. This waltz is like Sanders life with his father its harder just like the Waltz.

''Under the Influence'' by Scott Russell Sanders. (2016, May 12). Retrieved from https://studymoose.com/under-the-influence-by-scott-russell-sanders-essay 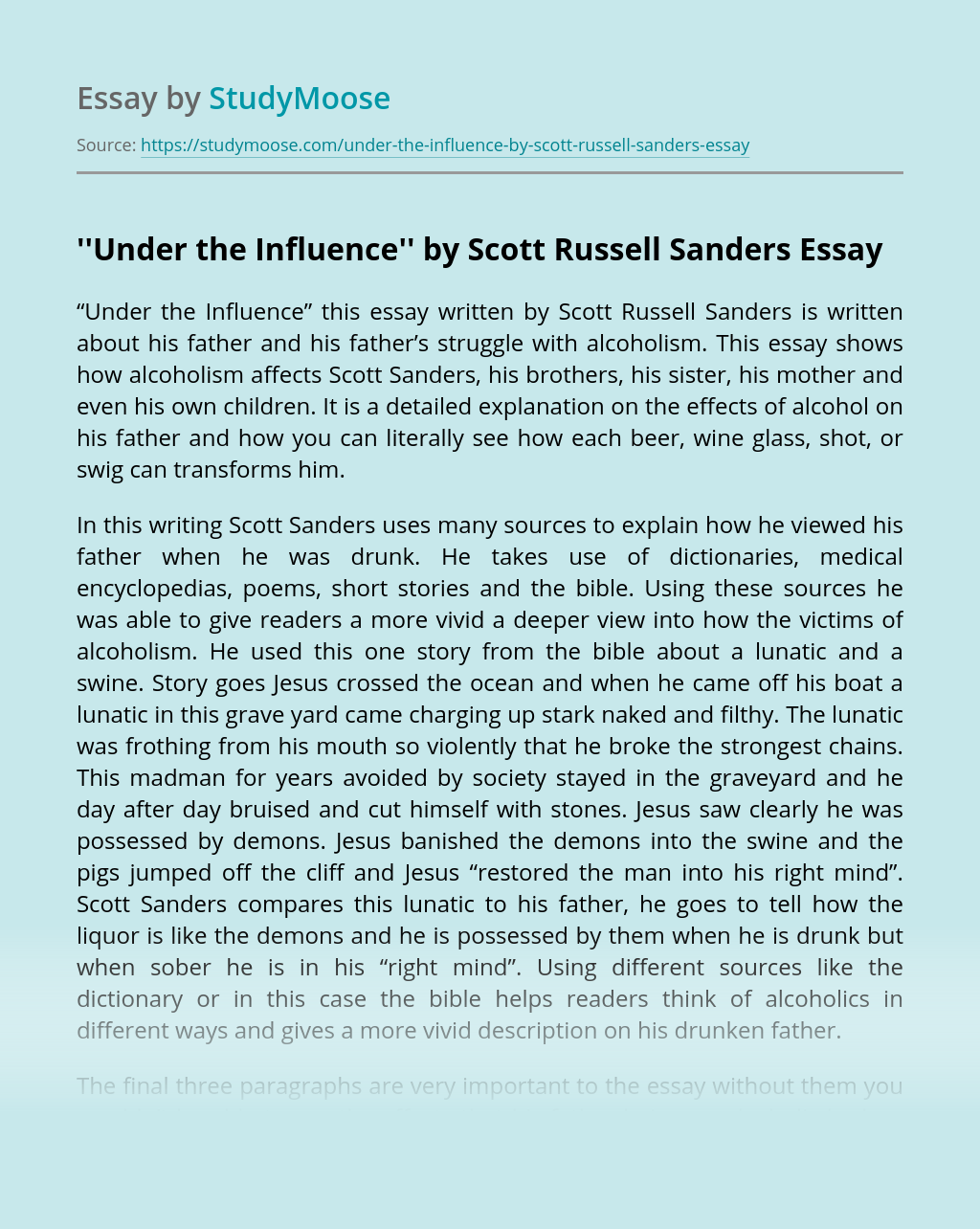