Use Of Literary Devices In Julius Caesar

Foreshadowing is a key literary device in the play. We see foreshadowing from the beginning of the play, when the Soothsayer tells Caesar to “Beware the Ides of March” in Act I, Scene I, which happens to be the day that Caesar is killed.

Don't use plagiarized sources. Get your custom essay on
“ Use Of Literary Devices In Julius Caesar ”
Get custom paper
NEW! smart matching with writer

Calpurnia later dreams of Caesar’s death, but he does not heed her warning. this not only tells us what is going to happen, but it also shows us how Caesar’s status and ego are getting to his head. Foreshadowing gives us a hint of what is to come, and can also reflect upon a character or characters.

A second literary device used in the play is the use of puns.

A pun is another element noted early on in Julius Caesar. When Marullus addresses the Cobbler, the pun begins. Cobbler is meant to have two meanings in this dialog: 1 – a shoemaker and 2 – a bungler. The Cobbler refers to himself as a “mender of bad soles,” playing with the word “soles.” Marullus interprets the Cobbler as a mender of “souls.” The usage of puns adds some light humor to the play as well as reflecting on the characters of the play. This also shows that the so-called “upper class” can still be fooled by the “commoners.

” The usage of puns adds to the story of Julius Caesar.

During Antony’s funeral speech, which is the climax of the play, several literary devices are used, including rhetorical questioning, sarcasm, and repetition. Antony frequently uses the question of Brutus’s honor in killing Caesar to win over the people of Rome. His repetition of “But Brutus is an honorable man” is used to persuade the people that Brutus has done wrong. His entire speech makes the people think: “Has Brutus really done a good deed?” It is this use of literary elements which earns Antony the respect and loyalty of the people. This, in turn, shapes the plot later in the play. This is one of the best examples of how literary devices have an effect on the plot of a piece of literature.

It is easy to see that literary devices not only make a story more interesting and colorful, but also have a direct effect on the plot of the piece. Shakespeare, like any writer, uses these devices in his works. The use of literary devices in literature is a necessity, and it is clear that Julius Caesar. is an excellent example of these techniques being used.

Use Of Literary Devices In Julius Caesar. (2016, Jul 11). Retrieved from https://studymoose.com/use-of-literary-devices-in-julius-caesar-essay 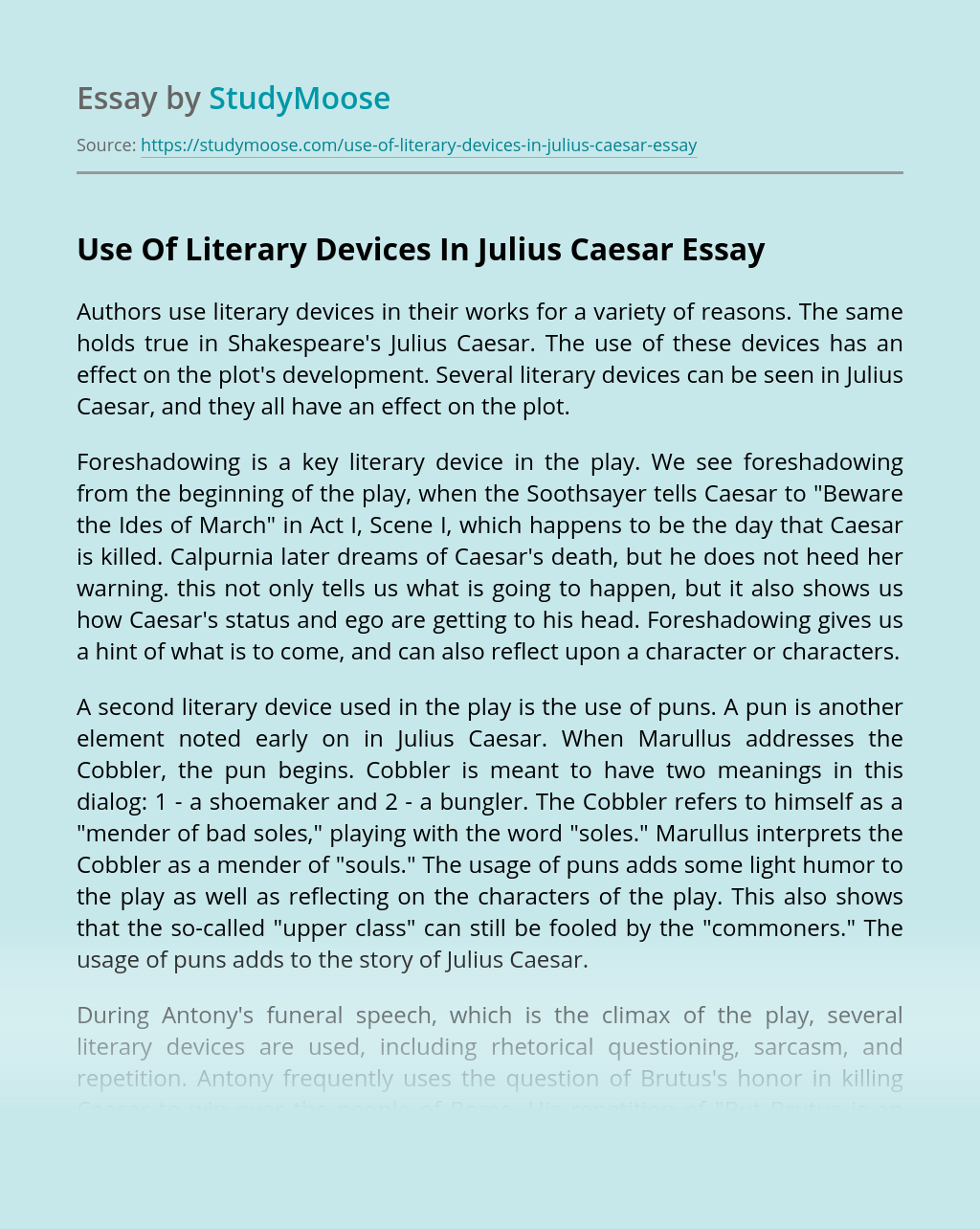