Introduction (Opening facts): Alcohol is the most dangerous drug in Australia, beating crack and heroin into second and third place in the ranking, according to recent studies. The current research used data from the 2012 National Survey on Drug Use and Health found that almost 60% of 18-24 year old current drinkers, who failed to complete high school, began drinking before the age of 16. The survey also revealed that teens are more likely to try alcohol for the first time during the summer months, along with other harmful drugs or cigarettes.

Don't use plagiarized sources. Get your custom essay on
“ Alcoholism Feature Article ”
Get custom paper
NEW! smart matching with writer

Teens are susceptible to alcohol mostly during this time due to more idle time, fewer responsibilities and less adult supervision.

Effects and results: With more than 1 in five teens between the ages of 14 and 19 of age, consuming alcohol on a weekly basis, the risk of cancer, digestive diseases and addicted related medical issues are predicted to rise. Those who drink regularly have been proven to have a lower productivity rate than those of unaffected areas.

Underage drinking plays a significant role in risky, sexual and often violent behaviour, which can lead to other health issues or injuries. As a result of this, motor vehicle crashes are the leading cause of death in people ages 15 to 20. Deadly crashes involving alcohol are twice as common in teens compared with people 21 and older. Further more, mixing drinking with swimming or boating can be fatal. Four out of 10 teens that drown have consumed alcohol. Underage drinking has also been linked with deaths and injuries from burns, falls, alcohol poisoning and suicide.

Consequently, the total cost attribute to underage drinking includes costs of traffic crashes, violent crime and injuries and treatment, equates to over $15.2 billion per year.

Signs and prevention: From the results of underage drinking proving deadly and most harmful, people in today’s modern society need to wake up to the signs towards alcoholism, especially towards younger victims. Mood changes, irritability and defensiveness are physical signs, which can be easily recognised. Another example is further school problems such as poor attendance, low grades and rebellion against family rules. Although many of the symptoms may seem typical towards an ordinary teenager, parents and carers should still be aware of these as they may reflect on how their child may be suffering from alcoholism. ‘It is critically important to take every opportunity we can, throughout the year to talk to our young people about the real risk of substance abuse and effective measures for avoiding it, so they will be informed and capable of making the right responsible decision.’

Common Experiences: A recent victim who has suffered from alcohol as a result to his death, is Liam Davies (16). As reported after New Years, Davies drank the tainted alcohol while celebrating New Year’s in Sydney with friends. He was rushed to a local hospital where he was in an unstable critical condition from alcohol poisoning. The Davies family released a statement asking for Australians to be careful when holidaying abroad or drinking in general.

“We would like to make people aware of the risks associated with consuming alcohol, especially without appropriate supervision”. 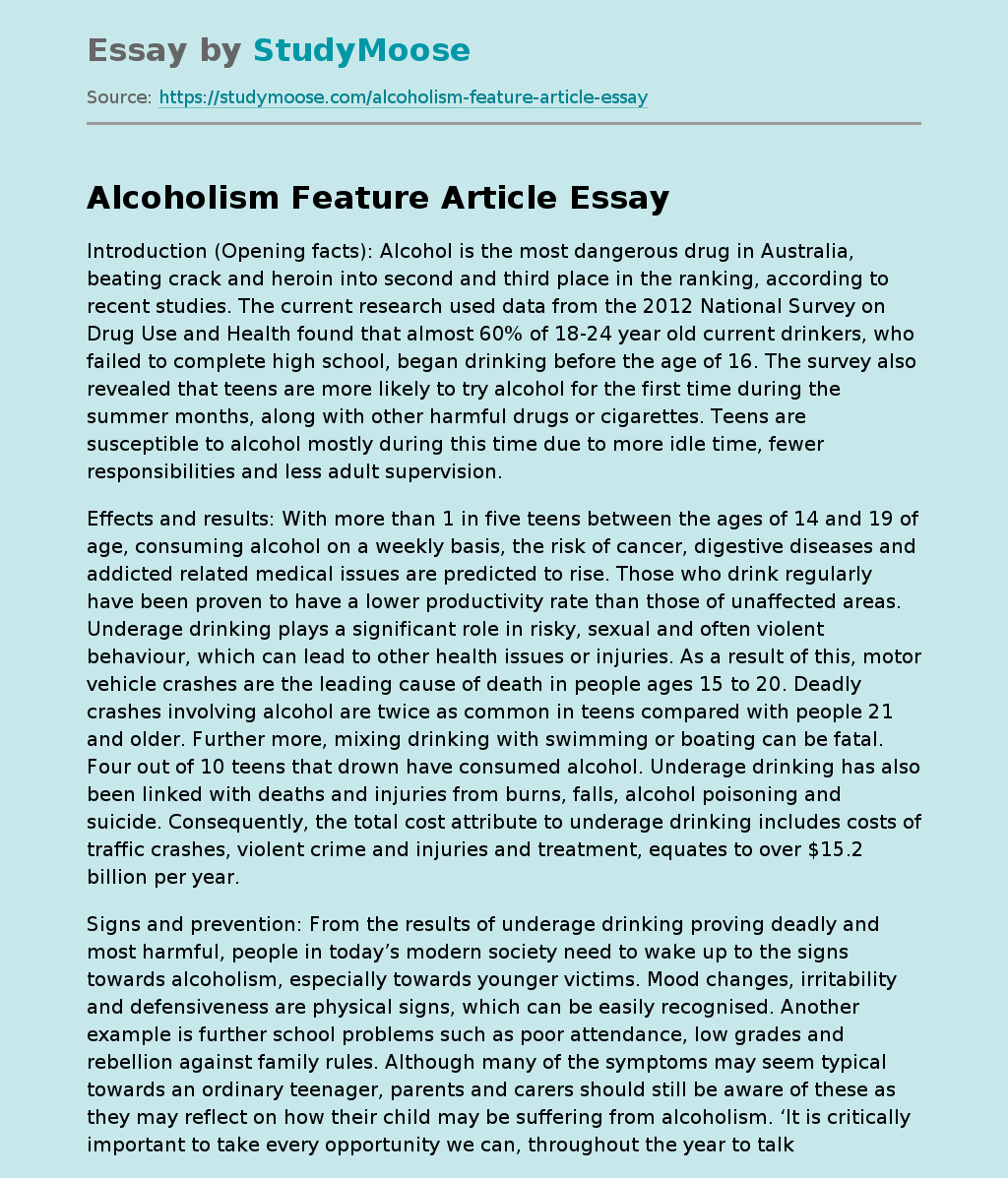