Ulysses Is Best Known for Sending the Trojan Horse

Ulysses, also known as Odysseus, is the main character in Homer’s works The Iliad and The Odyssey. He is also the title character in Alfred, Lord Tennyson’s, work Ulysses. Tennyson writes his poem after one of his close friends dies. Of course, Ulysses is best known for sending the Trojan Horse in to save Helen, who had been kidnapped by the Trojans. Ulysses was an adventurous man who found it hard to live a common life.

Tennyson looks at life through the eyes of Ulysses.

Don't use plagiarized sources. Get your custom essay on
“ Ulysses Is Best Known for Sending the Trojan Horse ”
Get custom paper
NEW! smart matching with writer

He has been away his family for ten years, and Ulysses is looking at a voyage that will be his final one. After so many adventures and so much time away from home, Odysseus wonders if he can actually return to a normal life. If he even wonders if he really wants to return to it. After years away in adventure, is he really the same person that he was when he left? These questions and concerns plague Odysseus, and Tennyson, throughout the poem.

Ulysses is inspired by his seafaring travels. His life has turned into needing the adventures that he has faced. Ulysses uses every opportunity he has to show off his bravery. In Tennyson’s poem, Ulysses is aging, and his mortality is beginning to catch up with him. Ulysses is reflecting on his past, living in his present, and wondering about his future.

Ulysses guides us through Tennyson’s poem. Currently, Ulysses is a soldier and a king. He is an older man now who has seen many things in his life.

As he reflects on his life, he notices what this adventurous life has done to him and his family. While his memories continue, Ulysses grows upset with his life. He also shows that his passion is growing. In the end, he realizes that his work is not done, and he has enough fight in him to finish one last battle.

Ulysses sees that fighting battles has value. As Tennyson goes through the writing of Ulysses, we realize that the title character is not satisfied unless he is fighting a battle. He cannot go on without a foe to face. Ulysses sees that he never yielded in any battle that he was in, and he was not about to yield now and settle for a mundane life at home. His adventurous life had led him to this point in life, and he cannot see himself staying at home. He needs the battle to survive and live abundantly.

Alfred, Lord Tennyson, sees himself in his character, Ulysses. After his friend passed away, Tennyson was placed in a very similar role. He realized that the death of his friend caused him to have a need of continuing to drive himself. Tennyson, like Ulysses, knew that a common and routine life was not what he was striving for. Ulysses realized that he must make the best of his life before his life was gone. Tennyson knew the same thing.

The final lines of the poem are probably the most famous and most poignant. “To strive, to seek, to find, and not to yield” is the purpose of the life of Ulysses. This man needed to get away from the tediousness of everyday life. Ulysses needed to go out of this life with the same adventurous tone that he had lived. He does not need to conform to anything that the common life offered. Ulysses simply could not make himself be ordinary. His life was one of adventure, and he knew no other way.

Tennyson saw in Ulysses the man he wanted to be. Tennyson, like Ulysses, searched for challenges in his life. Both men wanted to go out of this life in adventure and not settle for an ordinary and mundane life.

Ulysses Is Best Known for Sending the Trojan Horse. (2021, Aug 13). Retrieved from https://studymoose.com/ulysses-is-best-known-for-sending-the-trojan-horse-essay 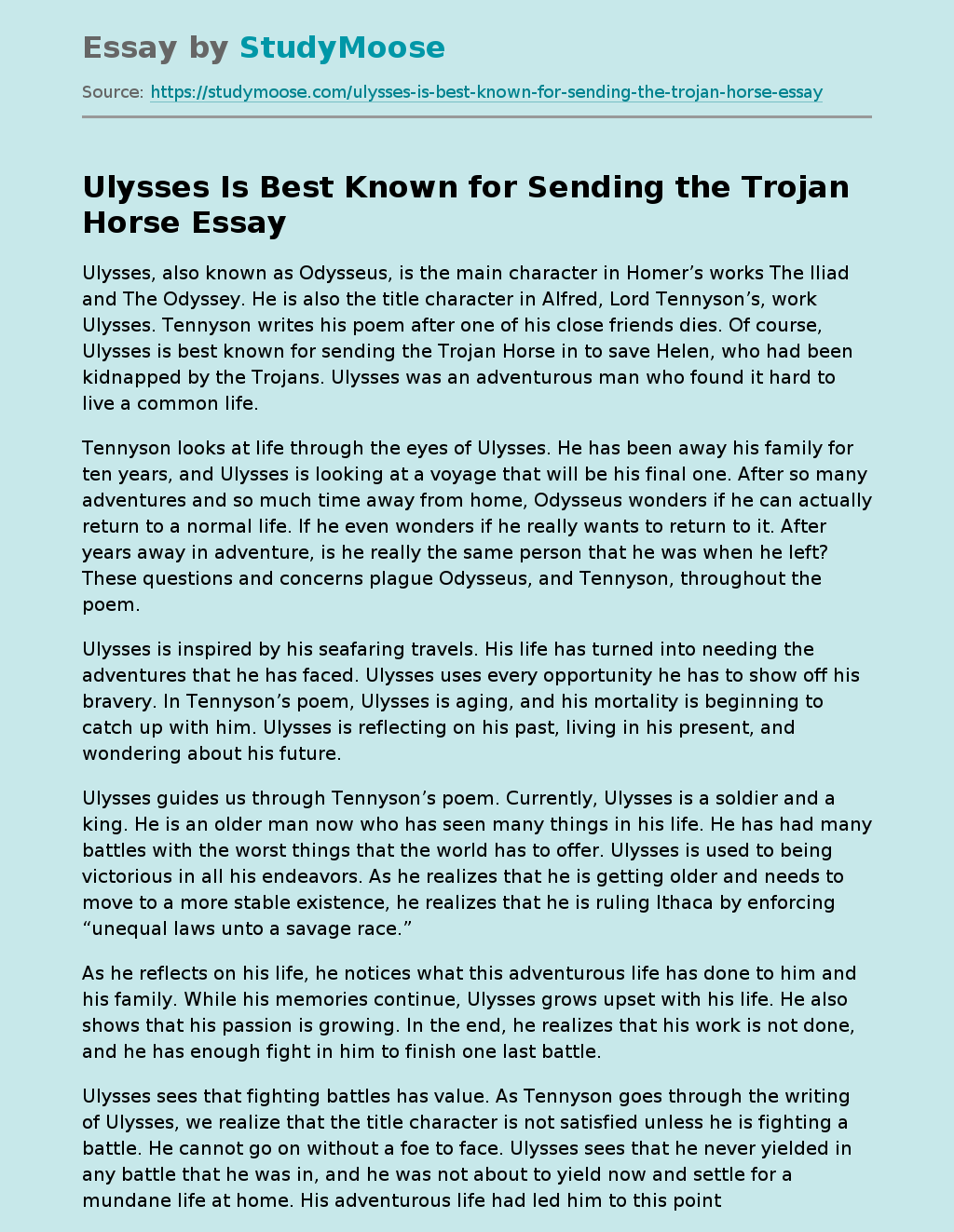