Uganda makes a great opportunity for a power plant company, since very few people have access to electricity. And since the unemployment rate is very high, the wages in Uganda must be relatively low (since there is high demand from people to work) , which is beneficial to HG in terms of costs. However, there are some drawbacks to conducting this project in Uganda, influenced by political and cultural factors. We will discuss the cultural factors that could affect the flow of this project in Uganda, and then we will briefly talk about some political issues that deserve to be mentioned as well.

Don't use plagiarized sources. Get your custom essay on
“ Uganda makes a great opportunity for a power plant company since very ”
Get custom paper
NEW! smart matching with writer

Language: the official language in Uganda is English. However, there are many spoken languages in Uganda, including Swahili, Bantu, and Nilotic, Which is a problem to consider before deciding to make any business project there. (Ladefoged, 1992) . This might drive HG to hire professional translators which is easily considered an extra cost.

Religion: about two-thirds of Ugandans are Christians, However, an entire third (which is a huge portion) consists of Muslims, Judaist Ugandans and others from different religions ( Oded, 1995) Which is an obstacle to Lovell, the founder and CEO of HG who believes that HG’s activities should embody Christian values and beliefs.

Having that barrier will place extra pressure on HG that will drive them to modify some of their business practices in order to succeed in Uganda.

Other cultural norms: there are also some other factors in the Ugandan culture that might affect the smooth flow of businesses there, including 1) bribery, they pay tips in advance to speed any process at the expense of others, or induce someone to do certain things, which can increase costs if practiced by organizations.

2) nepotism, a widely accepted behavior among Ugandans which implies those with power to favor relatives and friends, which increases the risk of alliance-formation & corruption within organizations.

although businesses in Uganda aren’t heavily regulated and monitored, Uganda’s government is considered one of the most corrupted governments, which places a huge political risk on HG’s shoulders. Another thing worth mentioning is the long history of political instability in Uganda, meaning that the uncertainty is very high, which leads HG to pay more on contingency plans and environmental analysis.

Respective attitudes of Martin and Green

Both Green and Martin had different mindsets that led them to have different perspectives on the right way of doing business in different cultures. Green for instance overlooks cultural differences and expects Ugandans to easily accept HG’s business practices when it’s actually a complicated process. Green also thinks that HG does not have to change its US way of doing business, which led us believe he is ethnocentric. On the other hand, Martin has the potential of being geocentric, but he is not adopting both cultures’ practices and creating new ways that satisfy both parties, he is adopting completely Ugandan ways with the good and ugly. For example, he had no problem hiring people through their friends and relatives, meaning that he supported nepotism which is already unethical, unprofessional, and illegal in the US as well. We also believe that he is involved in bribery since he does not mind handing out tips in advance, not only is it unethical, it is also considered an extra unnecessary cost. With all that being said, we believe that Martin is an extreme case and this is exactly where the controversy lies between Green and Martin. And the solution to that would be finding a middle ground where Martin adjusts his practices slightly from being the extreme opposite to being fully geocentric.

Wrong or right will also depend on whether there’s any direct violations of written rules or procedure which in this case, there’s none. So they both can be right depending on how we look at the situation. However, it is not a question of who is wrong or right. It is about what to do in different ‘Cultural situations given the knowledge and experience one has. Whether Martin did can be unethical from Green’s perspective is also a concern for discussion Martin may try to relate his knowledge and experience in African culture to the job in order to achieve his goals. While on the other hand, Green being a top executive is also tasked to fulfill goals both at the operational as well as corporate levels Green could close one eye and pray and hope for the best to turn out. After all that is also a practice in Christianity. Green could have given more support and guidance to Martin instead of judging him from behind. Evidently it turned out fine for Martin and HG is been fitting from it had Martin not been a member of the project team. Things may work out differently Resentment may occur among the people that had to be replaced. However, if properly addressed and managed, things may be pushed through. Instead of having Martin, HG may even hire a local talent who knows about the country very well. With the resources that HG has e.g. Money. Expertise, government connections, things may also turn out fine

Uganda makes a great opportunity for a power plant company since very. (2019, Nov 26). Retrieved from https://studymoose.com/uganda-makes-a-great-opportunity-for-a-power-plant-company-since-very-example-essay 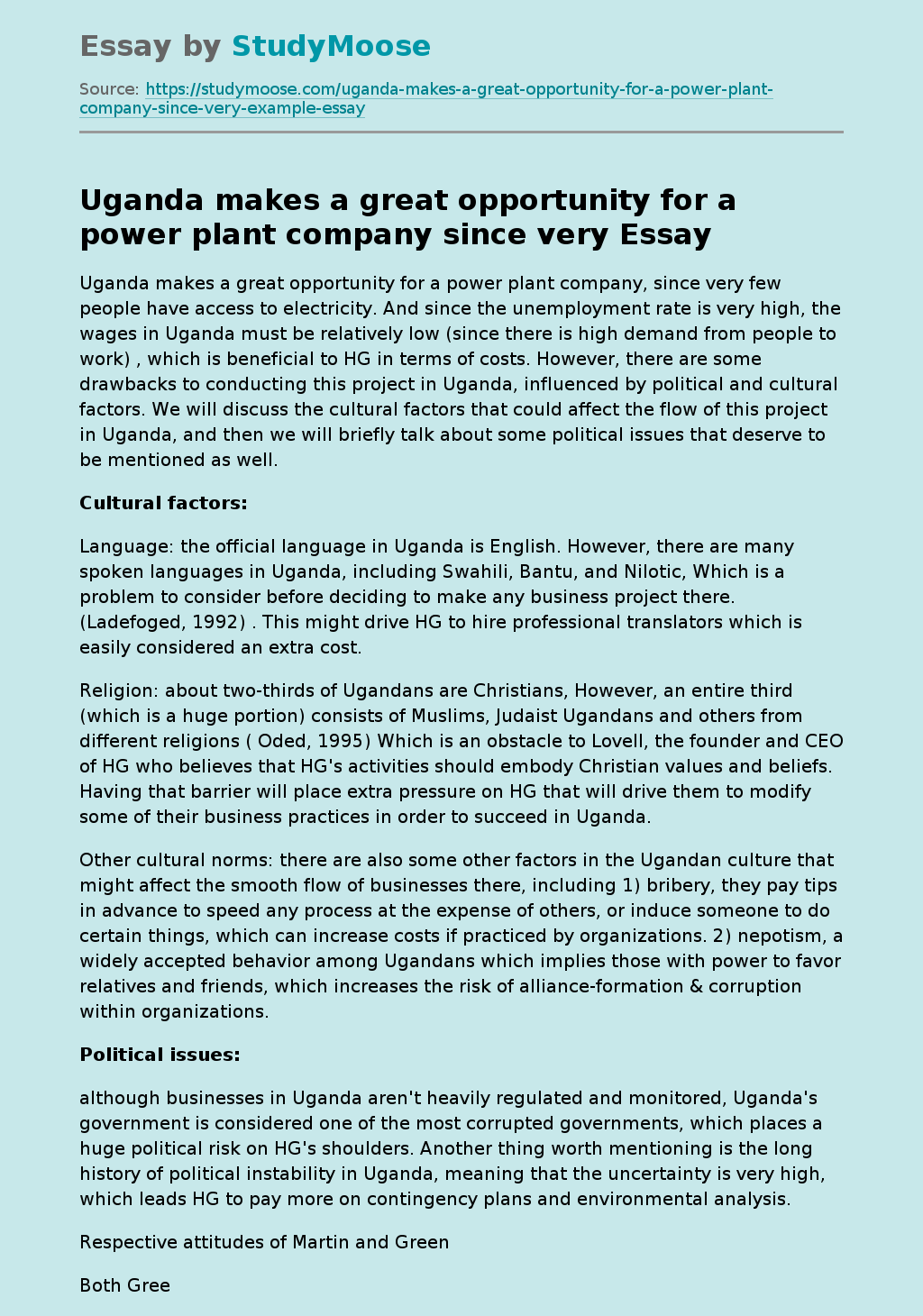